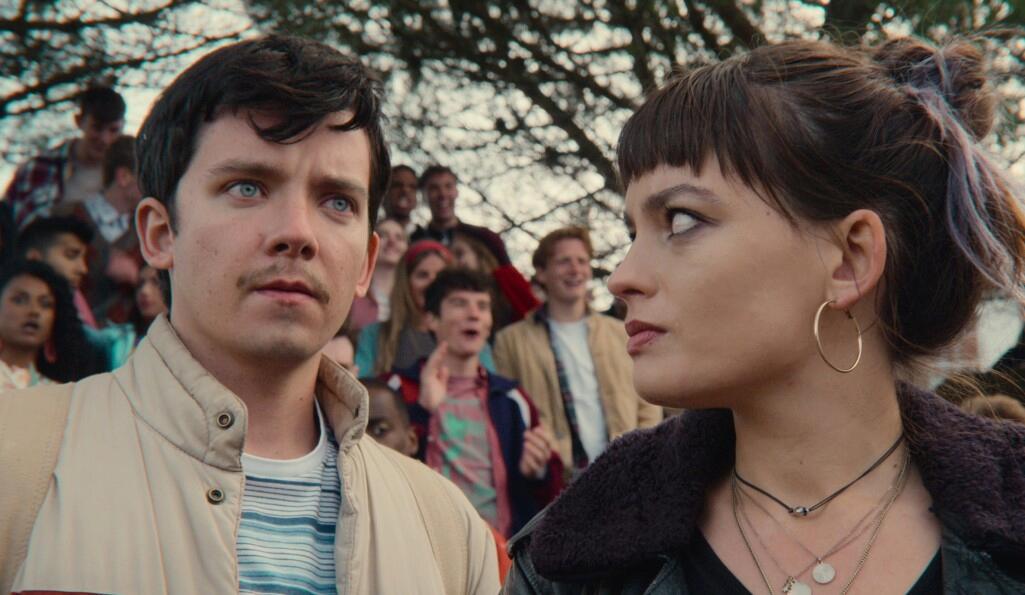 Among all the Covid-related production delays in television, the postponement for Sex Education stung the most. Laurie Nunn's delightful, sex-positive comedy was becoming a January pleasure, something funny and raunchy and enlightening to kick off the year. It follows the adventures of untrained sex therapist Otis (Asa Butterfield) and punky feminist Maeve (Emma Mackey), who dole out therapy sessions for money. And now, season three is finally arriving on Netflix in September.

Nunn makes a significant time jump, and Moordale has changed. Firstly, a new headteacher, Hope (Jemima Kirke), replaces the uptight and Basil Fawltyish Mr Groff (Alistair Petrie). Hope is determined to return Moordale to excellence, starting with school uniforms. The awkward Otis is breaking out of his shell, now having casual sex. Eric (Ncuti Gatwa) and Adam (Connor Swindells) are now official, despite their difficult past. And Otis’s mother Jean (Gillian Anderson), a qualified sex therapist, is pregnant.

The horror filmmaker and showrunner Mike Flanagan isn’t often considered in the same league as Ari Aster (Hereditary, Midsommar) or Robert Eggers (The Witch, The Lighthouse), but he deserves to be. Flanagan is more conventional, perhaps, but his output is as frightening and remarkable. In the space of three years, he’s provided two Hauntings (Hill House and Bly Manor) with a decent Shining sequel wedged in between – capturing the dark hearts of many.

Now, he’s back with a brand-new story. Midnight Mass is a limited Netflix series set in a tight-knit island community with strong religious ties. The already-existing divisions on Crockett Island are exacerbated with the arrival of a disgraced man and a charismatic priest. These events coincide with seemingly miraculous events, inflating the religious hysteria.

An important cinematic highlight of 2020, Sam Mendes’ WWI movie is a harrowing, exhilarating journey. Two young soldiers, Schofield (George MacKay) and Blake (Dean-Charles Chapman), are assigned a deathly task that sends them into enemy territory – crossing the ruined landscapes of northern France. They have to send a warning to a British platoon, which is about to march into a German trap.

Shot by cinematography veteran Roger Deakins, 1917 unfolds as if shot in one take – showing the necessity and real-time rhythm of the story. The film also stars Colin Firth, Benedict Cumberbatch and Andrew Scott.

There’s something irrepressibly absorbing about office-based law dramas based on harrowing true events. Often tragedy and injustice are concealed among bland walls and grey filing cabinets, like The Report or The Mauritanian, which both follow the torturous paranoia in the US after 9/11.

Sara Colangelo’s latest film Worth seems cut from similar cloth: tracing the story of Ken Feinberg (Michael Keaton), the lawyer put in charge of the September 11th Victim Compensation Fund. In the film, he faces understandable scrutiny from victims’ families. The money is distributed unevenly, favouring the rich over the poor. Vocal critic Charles Wolf (Stanley Tucci), whose wife died during the attacks, eventually gets through to Feinberg to fix the fund.

This September marks the 20th anniversary of the 9/11 attacks, a crucial moment in the history of the United States and the world. We’re still feeling the after-effects. American soldiers have only just left Afghanistan, birthing a new turbulent chapter for the country. The new five-part docuseries Turning Point starts and ends in Afghanistan: from the Soviet invasion in 1979 to the Taliban’s domination in 2021, with 9/11 at the centre.

The series interviews government officials, former CIA members, and US military veterans to chronicle the events before, during, and after the attacks. Although there are many 9/11 documentaries coming out this month (including Spike Lee’s new joint), this is a succinct and illuminating guide through one of the worst events in living memory.

The full Netflix in September slate:

Wednesday 1 September
How to Be a Cowboy
Old School
Turning Point: 9/11 and the War on Terror

Tuesday 14 September
Jack Whitehall: Travels With My Father, season 5
The World’s Most Amazin Vacation Rentals, season 2
You vs. Wild: Out Cold

Thursday 16 September
He-Man and the Masters of the Universe