In Derry Girls series 2, Erin (Saoirse-Monica Jackson) and her friends attend a peace initiative between Catholic and Protestant schools. But they're only in it for the lads...

The Derry Girls are five friends: four girls and one boy. Like plenty of teenagers they drink in secret, get anxious about exams, and nervously flirt with the opposite sex. But this is all while seeing constant bombings in the news and going to school in buses routinely checked by soldiers carrying machine guns.

In more serious hands, this would’ve been a straight and difficult drama. But writer Lisa McGee provides a funnier insight into an horrific time through the eyes of clueless kids. 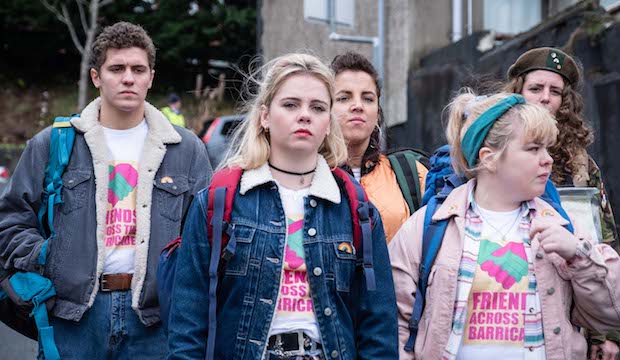 Series 2 starts with a special initiative to bridge the sectarian divide between Catholics and Protestants, as schools on both sides gather for the ‘Friends Against the Barricade’. On paper it's ideal, but the hatred – mostly installed by the kids’ parents – is unnavigable and makes it hilarious for the organisers to stumble through.

But Erin, Michelle, and Orla aren’t excited to find peace. They want some attractive Protestant boys (‘Protes’) to fool around with. Erin’s craving attention (narrating her life in the bath), Michelle’s seeking to satisfy her vices, and Orla’s stuck in whatever world she belongs to.

These plans to get some 'fine Protestant ass' don't include Clare, who's come out as gay, or James, who's desperate to prove his masculinity with the Prote lads (‘Shall us two bad bastards hook up or what?’). 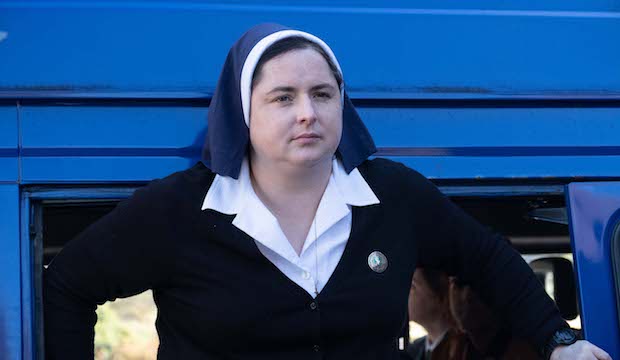 But the grownups threaten to steal the kids’ thunder. One of the finest and funniest characters in the show is Sister Michael, who finds issues with everything. She’s the pinnacle of cynical, a brilliantly morbid soul. And her introduction in series 2 is perfect: emerging out of the school bus and muttering ‘Kill me…’.

Also returning is the priest with the amazing hair, Father Peter, whose naive optimism is constantly mocked – especially as he gets the students to say similarities between Catholics and Protestants, inevitably ending in ludicrous differences (‘Catholics have more freckles!’, ‘Protestants hate ABBA!’).

Lisa McGee returns to the lighter side of the Troubles, and it’s like we never left. The jokes are still hilarious, the conflicts are still parochial (Erin’s mother is deeply paranoid about Michelle’s mother giving her a bowl for no reason), and the threat of sectarian violence still feels near and distant at the same time. And as we know from the series one finale, it can't all be comedy. The poignant punch will come – but, for now, it's just funny.