Red Nose Day Actually Red Nose Day Actually Matthew Robinson
It's all a bit alarming. Red Nose Day Actually – known by everyone as Love Actually 2 – is due on Friday 24 March, and the only footage we've seen is the 20-second clip below. The bulk of the original cast is returning for the charity-funding, 10-minute pseudo-sequel, so we'd planned on seeing Keira Knightley with Chiwetel Ejiofor or Hugh Grant with Martine McCutcheon; instead, we got Andrew Lincoln with his signs.

As you're probably aware, Lincoln played a particularly lovelorn character in the original Love Actually. Mark was best man at the wedding of his friends Peter (Ejiofor) and Juliet (Knightley), despite holding a sad little candle for the latter. In the film's most notorious scene, Mark ambushes the newlyweds at their London home and, pretending to be a carol singer, declares his undying love for Juliet via the super-romantic medium of A2 cardboard and permanent marker.

The sequel trailer is a quick reprise of that glorious and cringe-inducing moment; flipping through more hand-written cards, Andrew Lincoln silently asks the viewer to join the Love, Actually cast for a 'very special reunion'. It's strangely harrowing.

In what can only be described as a hostage video, a grey-bearded and red-eyed Lincoln drops his signs with the trembly haste of a man in jeopardy; based on the mortal terror in his eyes, we estimate at least three off-screen guns pointed in his direction. The cards say 'special reunion', but the glistening brow says SEND HELP and TELL MY FAMILY I LOVE THEM and I'VE DONE SEVEN SERIES OF AN AMERICAN ZOMBIE TV SHOW TO PUT THIS FILM BEHIND ME BUT THERE'S NO ESCAPE.

Why is Lincoln in grave danger? What horrors could Red Nose Day Actually possibly contain? Understandably, speculation is rife. Anticipation is dizzyingly high. Love Actually 2 could be anything, and we're very, very excited.

This can only be a good thing. Whatever he's making Lincoln suffer, director Richard Curtis is doing it for the best of reasons. Curtis is the co-founder of Red Nose Day itself, not just Red Nose Day Actually, and the Comic Relief appeal is one of the UK's most worthwhile charity events. Good for you, Curtis, you actor-blackmailing maniac. 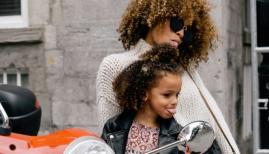