Behind Her Eyes, Netflix review ★★★★★

Simona Brown stars as Louise, a secretary and single mother who gets stuck in a dangerous love triangle between David (Tom Bateman) and Adele (Eve Hewson)

‘You can never know everything about a person – you’d go mad trying to.' Where this line purports to prepare you for the mystery in Behind Her Eyes, the madness described is dramatically understated: not only affecting the characters, but your own state of mind. By the end, you'll wonder if any of it really happened.

Ostensibly this is a basic, addictive psycho-thriller. Then it turns into a bizarre and baffling monster, an unpredictable mutation that encourages WTF reactions on Twitter. But, although it's hard to admit, there’s a lot of fun in that perplexity. You never know where the story will go next, and it’s impossible to guess. In a TV landscape where many supposedly profound series stretch themselves to elegant boredom, at least Behind Her Eyes keeps you hooked… despite climbing gradually into rubbish. 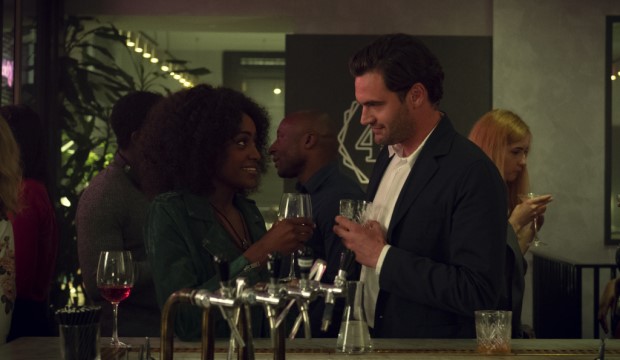 Louise (Simona Brown) has become the secretary of David (Tom Bateman), a hunky psychiatrist. She shared a cheeky snog with him one night and then, the morning after, found out he's her new boss. After this enjoyably contrived encounter, they now have to work together.

Making matters worse, he’s married to the quietly scary Adele (Eve Hewson). Making matters weirder, Louise befriends Adele out of guilt and they become great mates. After her seven-year-old son goes on holiday to France with his dad, Louise juggles her affair with David and her friendship with Adele. It’s a silly premise that attracts easy tension. Will Adele find out? Will David? And so on.

Running beneath that is something stranger: Louise’s night-terrors. They take the form of dark and lumpy corridors, elevating to a René Magritte-like serenity. This is when screenwriters Steve Lightfoot and Angela LaManna, adapting the book by Sarah Pinborough, dial the oddness up to 11.

The series falls out of its trashy logic and drowns in a desperate twist, about which even the surreal mind of David Lynch would be confused. It’s like watching melted chocolate poured on a half-eaten pizza: this critic wondered why (good God, why?) would they choose to do this… and then, annoyingly, he became curious about the taste. 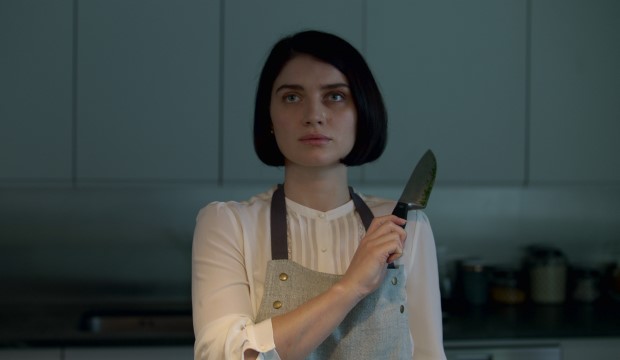 We can’t reveal the nature of these twists, but the explanations come drop by drop in flashbacks to Adele’s past. She was institutionalised at 18, spending the time with her best friend Rob (Robert Aramayo). He’s a gay, Scottish, working-class drug-addict – drawn thinly, as if traced from Danny Boyle’s Trainspotting. None of the characters are treated with much depth (Louise comes closest), but Rob borders on the offensive.

The performances carry you through, the actors somehow convinced of the material’s seriousness even if you’re not. The ridiculous turning points serve to inspire a day-long binge, and the dialogue avoids a lot of clichés – pretending the series is more intelligent and original than it turns out to be. Yes, it’s a disappointing finish, but it’s a stupidly exciting journey to get there. Often you wonder if the story can get even sillier and, on this front at least, Behind Her Eyes really delivers.

Behind Her Eyes is available on Netflix from Wednesday 17 February