In Netflix's After Life, Ricky Gervais plays a man who stops being nice after his wife (Kerry Godliman) dies. Now he always tells the brutal, impolite truth

After Life, Netflix review 4 After Life, Netflix review Euan Franklin
Not being able to say something in fear of argument, embarrassment, or politeness can be oppressive. How many times is it possible to nod along to someone boring? Or ignore a teenager on their phone in the cinema? Or say sorry for bumping into someone who’s walking too slowly? But we stay quiet and repressed and realise getting angry isn’t worth it.

But in the new Netflix comedy-drama After Life, Ricky Gervais removes that polite filter and says whatever the f*** he wants – treating brutal honesty like a superpower. 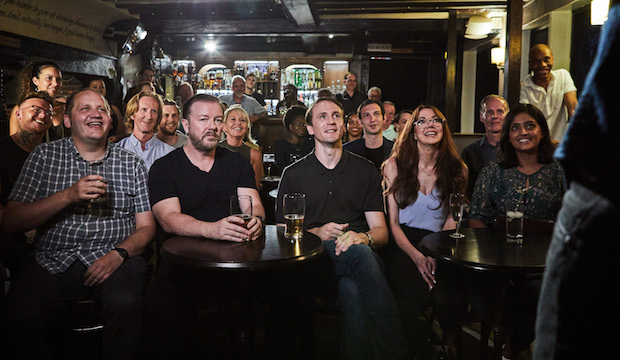 Worlds away from The Office or Extras, After Life unfolds like an allegorical treatise for Gervais’s personal philosophies. He plays Tony, a writer at a town newspaper, whose wife dies of cancer. He decides to take out his anger on the world via everyone he encounters, always speaking his mind no matter how insulting, with the assurance that he can always kill himself if it gets too much.

This runs contrary to what his wife, played by Kerry Godliman (Derek), wanted after she died – leaving behind video messages teaching him how to move past her. But he's not able to and, in her words, becomes ‘absolutely f***ing useless’.

Tony's brother-in-law, Matt, is his opposite – approaching life with a naïve niceness that’s never rewarded. Matt desperately wants to help, being the bright and optimistic core of the series, but Tony bats him away, his mind seemingly set.

The only reason he hasn’t killed himself is because of the dog (pets are a common deterrent for suicidal people). Tony’s dog is his pull back to life, his bark a motivator to put the razorblades down. 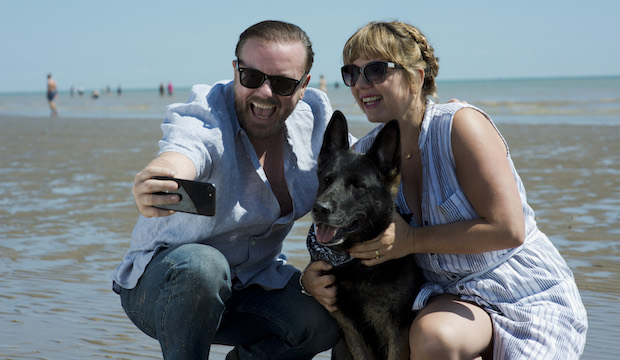 There are long dialogues and monologues about whether life is worth living and why it should be lived, offering Tony an escape from his misanthropic ways. These can drift into unnatural and sometimes clichéd aphorisms, making the series almost into more of a self-help guide than a character drama – but these scenes are still absorbing and painfully human.

And despite being Gervais’s darkest project to date, it’s not all doom and gloom. The comedy shines through, mostly in the ludicrous things people do to get in the town newspaper. All you need to get into the Tambury Gazette is a wall stain that resembles Kenneth Branagh or a baby that looks like Hitler. 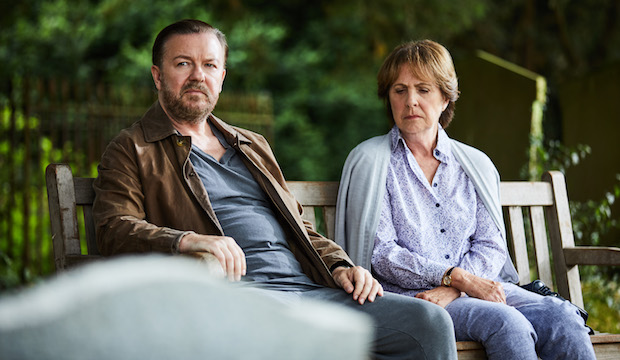 Gervais plays the part well, in a role he’s literally crafted for himself. He reveals his more emotional, vulnerable side, which isn’t seen in his interviews, radio shows or stand-up tours. It’s always a shock to watch Gervais cry, considering the funny, careless persona he puts across.

After Life won’t be for everyone, and might prove poisonous to those with a spiritual and optimistic outlook on life and death. But for the cynical, the pessimistic and the bleak, it’s a cathartic antidote to the dread of existence – a way of seeing meaninglessness as a drive for good rather than evil.