A courtroom drama with enough side-eye to rival the Royal Wedding: Sunday night TV at its very best

1 CW reader is interested
A Very English Scandal episode 3 review 5 A Very English Scandal episode 3 review Helena Kealey
Hugh Grant is master of a new facial expression. Gone is the self-assured smirk of Grant's rom-com youth, and in its place are two furious hangdog eyes, layers of folded flesh around a down-turned, toadish mouth and eyebrows raised in permanent bemusement.

TRY CULTURE WHISPER
Receive free tickets & insider tips to unlock the best of London — direct to your inbox
Much has been written on what a revelation this new Hugh Grant has been, with the actor proffering that getting older and uglier has opened him up to more meaty roles – including his sinister stint in Paddington 2.

But the magic of Russell T. Davies' three-part BBC drama has been the wit with which the cast have rendered this true story of Leader of the Liberal Party Jeremy Thorpe's fall from Parliament to Old Bailey. Grant's face, now looking like a dropped jelly, still incites the cackles of laughter that his smirk once did when he played sex-pest Daniel Clever in Bridge Jones's Diary.

There's Grant's beetle-black eyes (courtesy of contact lenses), flicking franticly over the police copies of letters that he wrote to his ex-lover Norman Scott. 'Cut that word... 'bunnies', he yells, trying to burn the word away with his finger. But the walls are closing in on Thorpe. Troublesome letters can't 'accidentally' go missing, nor paragraphs and words be cut – and now the word 'bunnies' is in the press and ricocheting around the whole of London.

'Bunnies!' squarks Thorpe's second wife Marion, a bouffant Monica Dolan. 'Am I married to a bunny?' There's Thorpe's soft down-turned mouth again, lying, pleading and eventually struggling to control the flow of tears into his seventies supper of cod and parsley source.

Director Stephen Frears captures the a sense of the time – the food, the cars, the offensively plummy accents and bafflingly low side partings – but avoids both nostalgia and distain for the era. People here are as stupid, insufferable and complex as our own moronic politicians. And always worth laughing at.

'A very nice meal', Thorpe stutters eventually, as his wife extends her sympathy and loyalty to a man who clearly does not deserve it. It would have been so easy to portray Marion as a beard (i.e and a woman stuck in a loveless marriage based on deception and convenience). But the world is more complicated than that, and so is Mr Thorpe's wife.

Finally, we get to the courtroom, where there are enough sniggers and dirty side-eyes to rival the Royal Wedding. 'Vaseline... it was to lubricate him... [I did] the only thing I could do, I bit the pillow,' Norman Scott tells the row of gleeful reporters.

Ben Whishaw as Scott is electrifying. He gives us all the conflicting sides of a sensitive soul, down on his luck for most his life, but now in the spotlight. One minute Scott is crying in toilets, the next announcing to the public world that men like him shall be silenced no longer.

Church giggles all around. And there's Thorpe's fallen face, shiny black eyes widening underneath those unruly brows, comically ignoring the crew of idiot Welshmen sat next to him. Thorpe's sunken expression doesn't give away so much as a wobble as he watches his life of social climbing and political ambition slip away from him. But will it?

Read our reviews of episode one and two

A Very English Scandal is available on iPlayer now 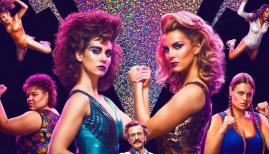