Wembley Park is hosting its first-ever light festival: Winterfest. Artists from all over the world have curated light and sound artworks for the installation, transforming Wembley Park into an immersive playground of multi-sensory experiences. Visitors are invited to wander along a multicoloured trail featuring Burning Man festival’s Sonic Runway, the tallest LED Christmas tree ever built in London, and a three-metre heart sculpture adorned with mistletoe and neon lights. 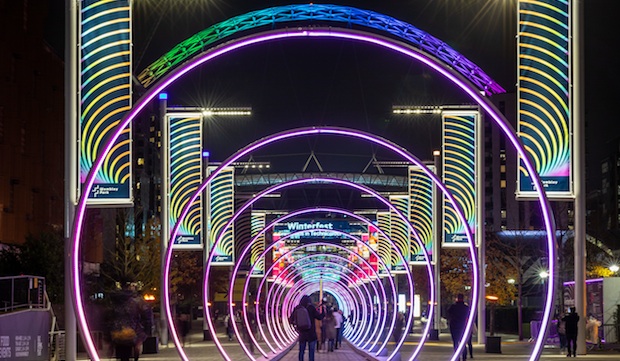 Coming to Wembley from Nevada’s Burning Man festival is Sonic Runway, a multi-sensory installation conceived by Californian artists Rob Jensen and Warren Trezevant. Walk through the 130-metre corridor of concentric rings on Olympic Way and admire how a bespoke musical soundtrack triggers kaleidoscopic ripples of light that move at the speed of sound. 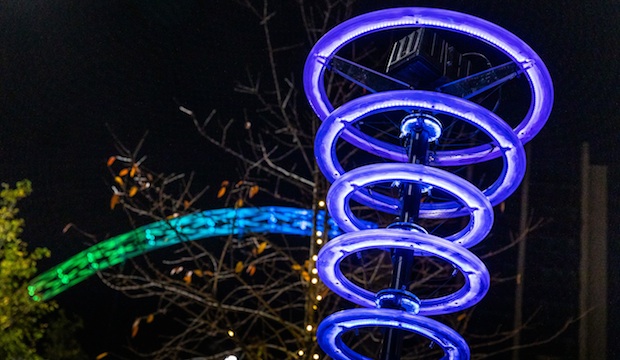 Musician and inventor Michael Davis is transforming Wembley Park’s Market Square into a multi-sensory playground with his commission: Illumaphonium: Halo. The installation enlists its audience in a shared moment of music making, encouraging them to interact with a series of digitally interlinked columns in order to influence touch-responsive light and sound patterns. 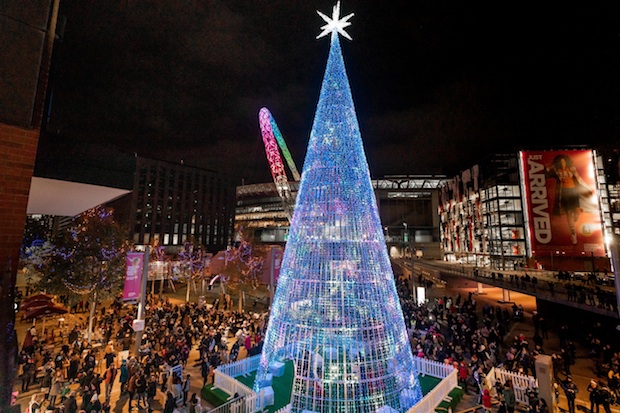 At 25 metres, The Hopeful Tree is the tallest LED-lit Christmas tree ever to stand in London. It’s also one of the brightest, lit by over 100,000 low-energy coloured lights. No need to admire it from afar either; the walk-through tree looks most impressive when gazing up from under its conical boughs. 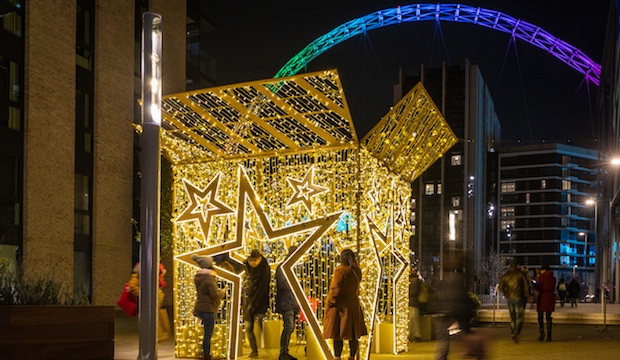 If you come to Wembley Park in search of an Instagram moment, look to StarBox: a gift box-shaped installation filled with golden lights and shimmering sequins. The installation proved so popular last year it’s back for a second run. Frame yourselves in one of its star-shaped cut-outs and find the perfect angle for the ’gram. 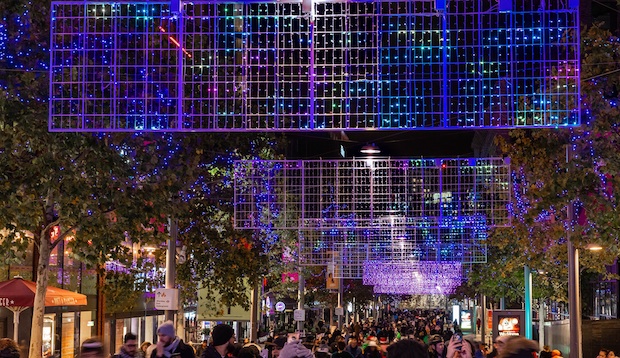 While the 36 new trees on Olympic Way might still be awaiting feathery residents, this winter their boughs play home to a digital flock of birds thanks to Murmuration of Hopes: a site-specific light commission by architectural designer Elyne Legarnisson and digital scenographer Aurelien Lafargue. The installation – inspired by the swirling groups of flocking birds, called murmurations – takes the form of 15 giant LED banners hung across the trees, which project choreographed clouds of light. 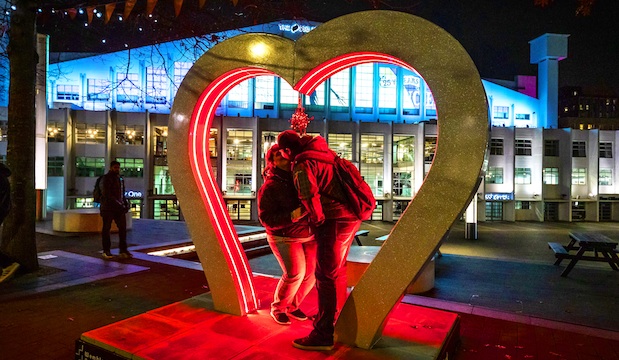 Hoping for a mistletoe moment this Christmas? Pucker up under Love Spot: a heart sculpture wrapped in mistletoe and passion-hot neon lights. 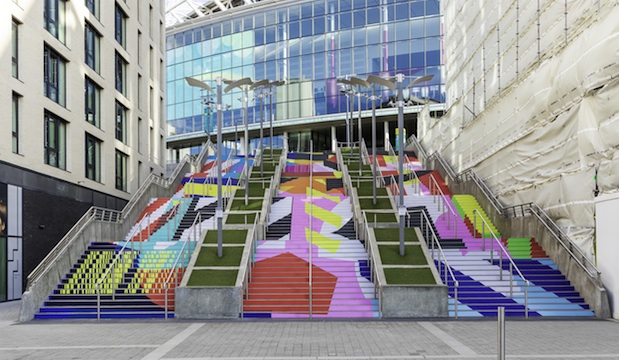 Never been to Rio de Janeiro’s famous Escadaria Selarón? Now, you won’t need to, because Wembley Park has its own set of colourful steps thanks to acclaimed Irish street artist Maser. Called Saturation Surge, the commission sees bold, colourful and geometric shapes cover the Spanish Steps which connect Wembley Stadium to The SSE Arena. 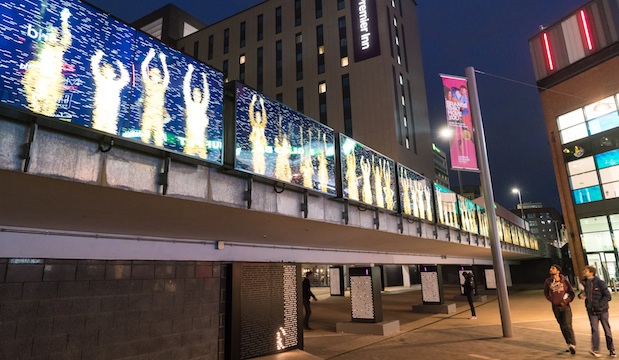 The Royal Route might have got its name from being the road taken by the royal family when visiting the park, but Jason Bruges’ Royal Wave installation has made it a destination in its own right. Inspired by the Mexican Wave, the 3D installation is comprised of portraits of local community members and is responsive to the movements of passers-by. 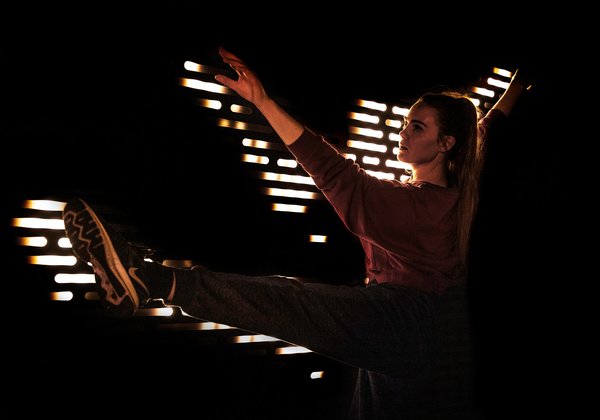 Those who walk along the Royal Route underpass will find their silhouette walking alongside them thanks to Shadow Wall, a monochromatic media artwork by Jason Bruges. Most effective when the tunnel is busy with passers-by, the overlaying shadows artfully reveal the ebb and flow of crowds. 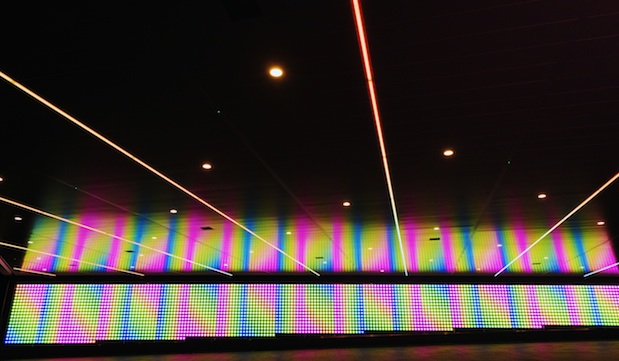 Injecting style and colour into the main public entrance of Wembley Park – specifically over the Bobby Moore Bridge – is miriamandtom’s installation: Crossover. The digital LED lighting-led piece is a permanent addition to Olympic Way, designed to improve the pedestrian experience after dark.

If exploring the vast outdoor offering at Winterfest leaves you with a chill in your bones, thaw the toes and warm the heart by watching smash-hit musical Fame, which comes to the Troubadour Wembley Park Theatre directly from the West End. The critically acclaimed 30th Anniversary production is here for a limited run only from 21 December – 26 January.

You’ll want to arrive with an appetite on your visit to Wembley Park, because your taste buds are about to be tantalised. Those who arrive early should head to top-notch roastery Black Sheep Coffee to get their caffeine fix. If you come looking for a takeaway bite that’s speedy and sumptuous, browse the 20+ street food stalls lining the sides of Boxpark Wembley. After a mid-afternoon sugar fix? You can do no better than a sweet treat from artisan bakery Bread Ahead. And for a sit-down dinner in a low-key, lively setting, look to Italian restaurant Pasta Remoli.

It’s Christmas, after all, and you probably still have some presents to buy. Thankfully, you’re in the right place. From hunting for sartorial bargains at the London Designer Outlet to shopping the wares of independent craft producers at Wembley Park Market, there’s plenty on offer you’ll want to take home. 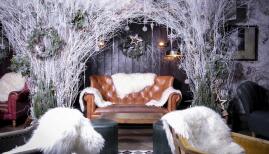 The most festive winter pop-ups London has to offer