Saffron Burrows interview: we talked to the Mozart in the Jungle star

We chatted to Saffron Burrows about how the classical world compares to the theatrical, and how streaming is changing the way we view TV 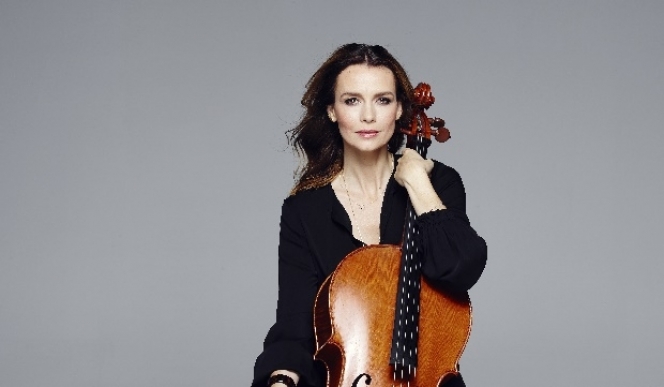 Saffron Burrows, Photograph: Prosper PR
A flagship of Amazon Prime’s online streaming service, Mozart in the Jungle is the kind of show that you can easily find yourself watching into the early hours of the morning, clicking that ‘next episode’ button with flagrant disregard for tomorrow’s commitments. Co-created by Jason Schwartzman, Roman Coppola, Paul Weitz and Alex Timbers, it’s a warm-hearted, razor-sharp take on the world of contemporary classical music, following the travails of a fictionalised New York orchestra. Now two seasons in, the show has built a real following and recently picked up two Golden Globes.

In the show, Saffron Burrows plays Cynthia, a cellist with a taste for romance and trade unionism. Born in London, Burrows is currently based in L.A. but we were lucky enough to have a chat with her earlier this week. Even over the phone you could tell that she’s a natural conversational: candid, digressive, and quick-witted. Breaking away mid-answer at one point, she exclaimed ‘I keep seeing British people I know walking by’, concluding ‘it’s kind of surreal.’

Our conversation touched on cello lessons, the debauched lives of classical musicians, before finding its way to the new ways that we watch TV.

On the show your character’s a cellist. Are you a musician yourself?

I’ve played a cellist in a couple of films before just by chance. I said to someone the other day, I think if you’re tall, it’s a good start because they think you look like a cellist. It’s been lovely because I’ve become really fond of the cello and I’ve got excellent teachers, and I was lucky enough to have the principal cellist at the New York Phil spend time with me, and invite me into their rehearsal room.

Is that world as you present it on the show?

Apparently, the way we present it is quite tame compared to the reality! Gustavo Dudamel – the famous, very passionate conductor at the L.A. Phil – told Gael that our portrayal of some of the debauchery of the music world was far more tame.

And also the tantrums, and the contention of it, all of the feelings that go along with working together closely in an environment over years and years. We’ve heard lots of stories of couples who fall in love in an orchestra and then marry and then divorce, but still retain their chair in the orchestra because it’s such a cherished job to have. So for years they can be playing and not speaking. But then the flipside of that is all the love that’s generated between people when they’re working in this way.

How does classical music world compare to dramatic world? Are there overlaps?

There are definitely overlaps - the touring of a play, the adrenaline rush, what do you do afterwards when you come offstage? Where do you put that adrenaline?

Also, some of the financial struggles that they have. There’s a great disparity in an orchestra between the very well paid and the not so well paid. My character’s seen doing a naff, Broadway musical, scoring soundtracks for creepy horror films, as well as playing some Mahler and then rushing off to another gig.

How is it working with such a talented team of creators? Are they often on set?

We have four creators. Alex Timbers comes from theatre; he’s had shows at The National, he did that brilliant show about Imelda Marcos. He’s more in his theatre life but all the other creators are with us all the time. Roman Coppola directed the episodes in Mexico City which feel very cinematic to me; they’re like little films in themselves. Jason Schwarzman had his directorial debut with us; he directed the episode where Gael and Malcolm McDowall’s character get really trippy and high and build a tent.

Mozart in the Jungle is a big flagship show for Amazon Prime. How was it working with them?

I really like working with this company because they’re very respectful of what people are doing. They’re not at all heavy-handed. They’ll find filmmakers they respect and writers they respect and then they’ll cast it the way they went to cast it and they’ll find the crew that they like. It makes the actor on set very free, much more like a low-budget film. It feels very spontaneous; there’s a lot of improvisation and, you know, our directors rotate, but each one turns up with a lot of enthusiasm. I think that’s why they’ve drawn such amazing people to their fold recently.

There was that rather dreadful, stultifying atmosphere where they would air something and when it was on telly, if the numbers weren’t exactly right the next morning or what they considered to be high enough they could cancel it at any moment. There was this atmosphere of fear; everyone’s looking over their shoulder regarding their jobs.

Is there another series planned?

Well, we shoot in the summers. Hopefully, now it’s had a really lovely reception, we’ll have another season this summer. We don’t know for sure yet, fingers crossed. In the meantime, I’m just keeping up with my cello!

What are your projects besides that?

Well, I’m a new mum - my little boy’s three. I’ve got stuff that I’m thinking about producing but you know I really love, for the moment, doing this and being with my son. I was in The Night of the Lotus last year which is in post-production now. That was a British-based project shot in Tanzania and London. But this project been a really enjoyable adventure so far so we’ll see what happens with it this year.

Mozart in the Jungle