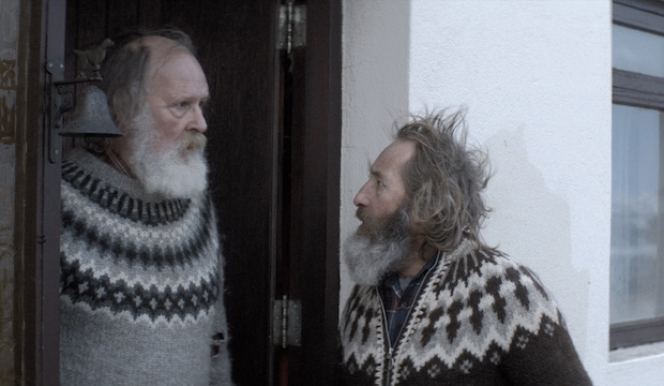 Ostensibly Rams (Hrútar) seems a bit of a hard sell. Pegged as an 'Icelandic drama about sheep farming', Rams broaches a simple subject, and one rarely given much attention on screen. The film, a peculiar mix of black humour and tragic drama, tells of two neighbouring but estranged brothers, Gummi and Kiddi, as they attempt to deal with a crisis on their farm in a remote and secluded Icelandic valley.

Directed by Grímur Hákonarson, the film won of Cannes' prestigious 'Un Certain Regard' award, and Hákonarson has been in high demand since. When we meet in the Soho Hotel, he's wolfing down a club sandwich in between press conferences and film screenings. He has, he says, been "living out of a suitcase" since Cannes. Hákonarson speaks in a strong Icelandic accent, in a tone that is at once wry and sincere.

He looks up between mouthfuls, frowning from under the brim of his director's beret, as he tells us about life post-Cannes and what made him choose such an unusual subject for his film.

What a wonderful response. How do you feel about the way Rams has been received in Europe, and internationally?

None of us expected the film to get into Cannes, so it has been a great surprise for the Icelandic film industry. It’s the first Icelandic film to win a prize at Cannes, and the second to be nominated for the European film awards: it’s exciting. I try not to think too much about it.

What about at home in Iceland? I can’t imagine this is a subject many have seen on screen before?

The film really speaks to the people in Iceland – a lot of farmers I’ve spoken to say that it’s the most realistic film about rural life we’ve seen. It got a lot of people to the cinema.

The film is about the importance of human relationships in difficult times. It’s about how important it is to have a brother or siblings in a moment of crisis, you need some kind of human contact. That’s the message of the film, at least. And the story I will try to say: the central part is the relationship between man and sheep: between farmers and sheep.

Did you teach your actors how to work with sheep?

I spent a lot of time taking them to speak to farmers and do these kind of practical rehearsals. I let them stay with the flock and learn how to talk sheep –

To communicate with them! It was really important to me that the actors would be believable as farmers from those first minutes. I put a lot of work into that too.

Your two main actors both have these big bushy beards and rugged faces. They almost start to resemble their sheep.

The film begins in the summer and takes place over half a year. I let the actors grow the beards. So they almost look more like savages – or sheep – as the film goes along. They kind of materialise into the sheep. They have a sheep hanging on the wall, and sheepskin hats. They stay with them, talk to them. 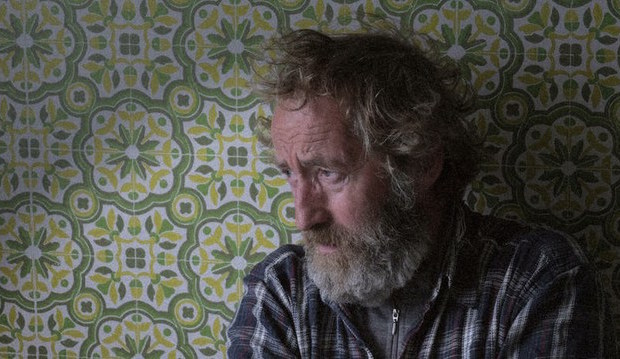 How did the sheep react to filming?

One where we were trying to take them inside the shed, in the middle of the summer, and they didn't want to go, they wanted to stay outside. They ran all over the place, down the hills – it took us a long time to collect them again and get them together. But usually they were quite easy to work with. I had a feeling, as the shooting went along, that – they didn't know that they were acting in a film but – they got used to the routine.

The world that Rams depicts, the remote mountainous regions of Iceland and thee small farming community, is this a world you are familiar with?

All these long, fixed perspective shots and the black humour – some might say Rams typifies Icelandic cinema. Do you think your film is representative of Icelandic cinema?

A certain type of Icelandic films have a black humour, like Dagur Kari's Virgin Mountain. We also make thrillers, comedies, genre films, but Scandinavians are famous for having black humour. We are so far in the north we get a bit – our mind gets darker.

There’s also a lot of black humour in Icelandic literature, the Icelandic sagas about the Vikings. I like to mix drama and comedy in my movies: I’ve been trying to develop a personal style to make my films work both ways.

There is a sense of pride that lies at the heart of the film. The brothers uphold the virtues of an almost ritualistic, even superstitious tradition. Is this a side to Iceland you want to make more widely known, this pride and respect for tradition?

It’s really close to the hearts of Icelandic people. We have a long history with sheep, they were our main source of livelihood throughout the centuries. Some people are really almost ready to die for them. Right now, in Iceland, a farmer is trying to get permission to bury himself with his sheep. What happens in the film is really accurate.

The film also indirectly addresses the economic disparity between Iceland's rural and urban communities. Is this an intention?

It's about the damage. The scrapie disease meant a lot of damage in this community. I wanted to show the personal side of the loss. My mother's sister lost a flock because of scrapie, and I personally experienced how she and her husband got depressed and had to wait for two years for a new flock.

I'm working on a new script, it's called The County, a rural lesbian story set in Iceland. It's a similar style to Rams – lots of dark humour.