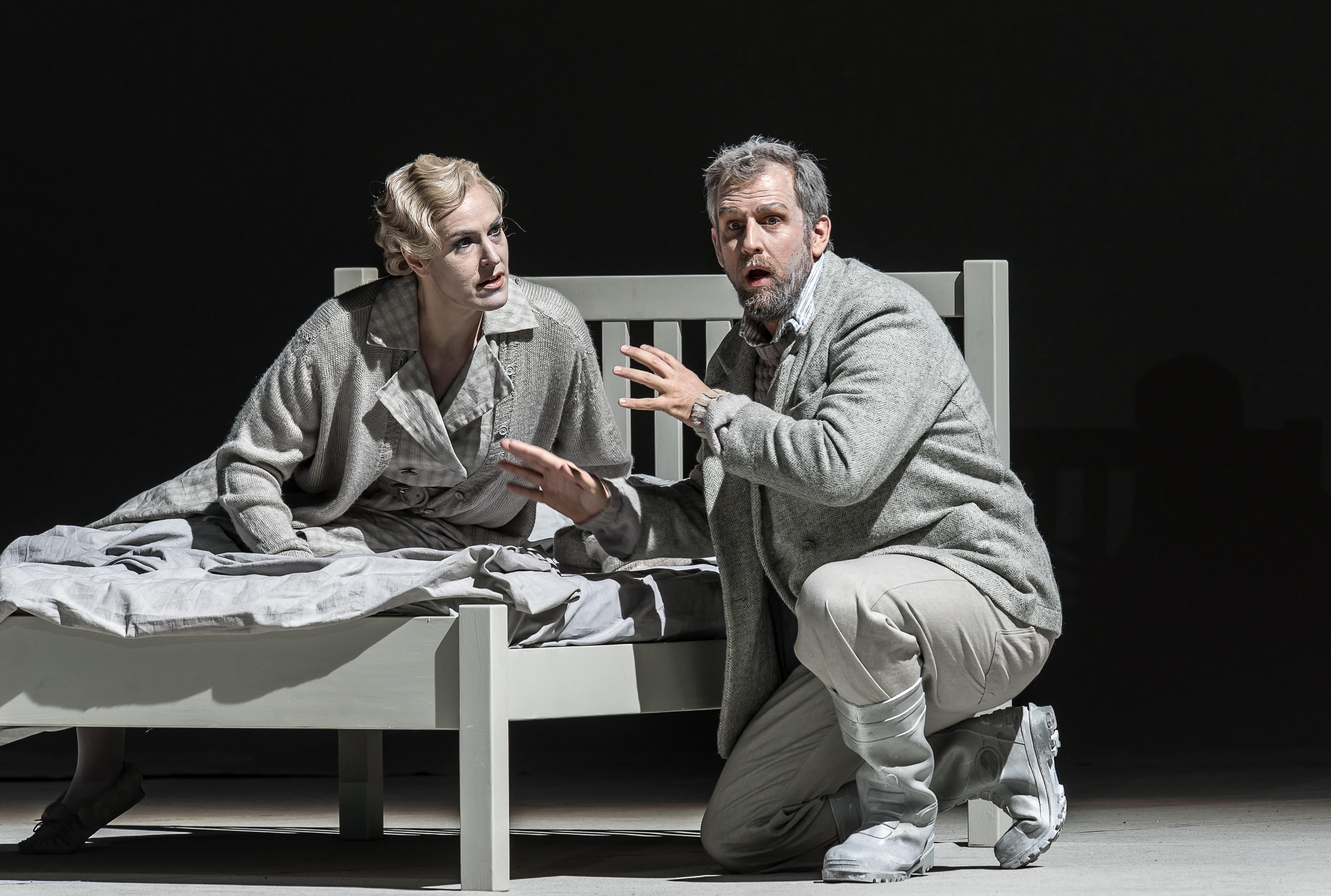 Christoph Pohl and Helena Rasker, © ROH, photographer Clive Barda
A father waits as his child is born; the now elderly child sinks into death. These are the only two scenes of Morgen und Abend, Georg Friedrich Haas’ new opera. Such sparseness extends throughout. The action is minimal, the libretto prone to repetition. The score plays down Haas’ usual microtones for something simpler, with shimmering chords creating a sustained sound-scape. And the set is a bare white room, bedecked in even whiter furniture; even the costumes are colourless. The most dramatic moment sees a bright light slowly turned around to momentarily blind the audience.

It might all sound a little dour, even monotonous. The libretto, adapted by Jon Fosse from one of his novels, has its longueurs. An opening monologue delivered by Klaus Maria Brandauer mixes moments of Beckettian searching with the mundane; later, there are recurrent sung passages whose directness forsakes a sense of poetry. It is at its best when it homes in on the quotidian details of life, such as on Christoph Pohl’s dying Johannes’ desire to cut his friend Peter’s hair. At such moments it can be mesmerising. 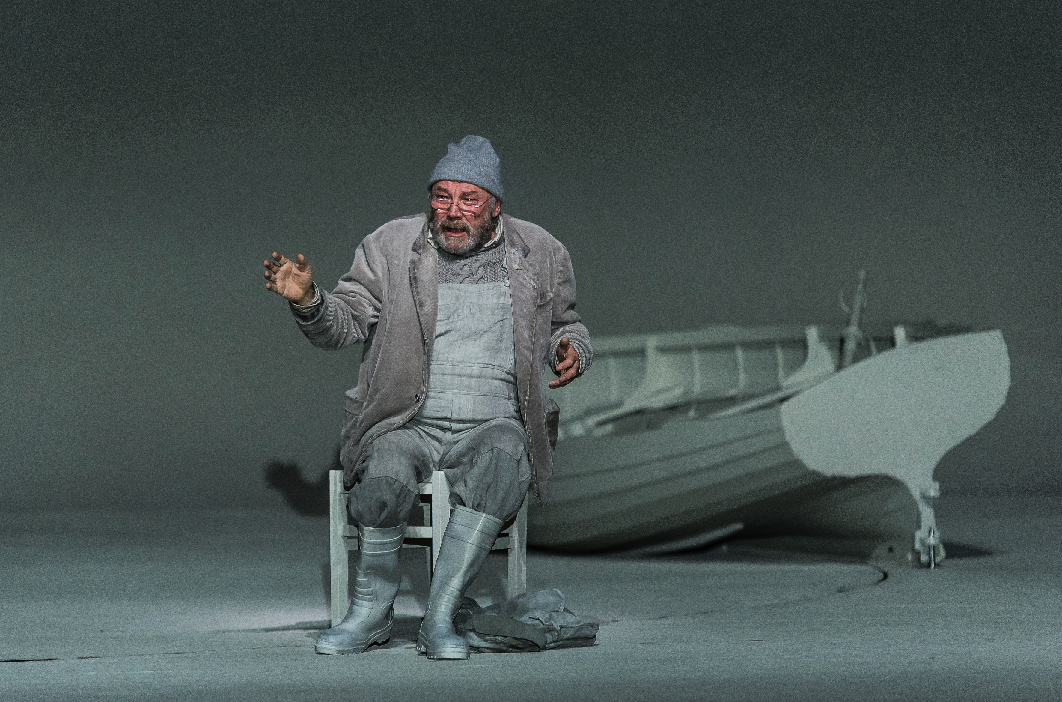 But if the words do not always reach the profundity they aspire to, Haas’ music is another matter entirely. Its austerity carries reverberations of medieval plainchant. The orchestra, ably conducted by Michael Boder, is given space for each instrument to shine. The atmospherics of the opening act set the stage for moments of small drama, where everything comes together in a quiet flourish. Recurrent motifs, such as the choir signaling the passage from life to death, for instance, make a virtue of the spareness. Haas’ vocal writing, which forsakes histrionics for muted purity, is especially compelling, particularly during sections where two or three voices overlap.

Although Brandauer sometimes slides into melodramatic declamation, the cast acquit themselves well. As the troubled Johannes, Pohl conveys an earthy humanity. Helena Rasker glows with affection as his departed wife Erna, and Sarah Wegener pinpoints the wrenching feeling of bereavement as surviving daughter Signe. Director Graham Vick installs an almost invisible dynamism to the production, achieving a lot with a limited palette in an echo of Haas’ music. Lighting designer Giuseppe Di Iorio deserves special praise; the very whiteness of his lights grows to have a texture of its own.

Demanding a good deal of patience, Morgen und Abend is certainly not for everyone. But for those who are willing, it offers a hypnotic journey into a celestial world of light and sound.

Want to find out more? Read our preview below.

Over the past few years, one contemporary European composer has managed to become a fixture on the English stage: the eminently serious Georg Friedrich Haas. In vain, an impassioned protest against the rise of the far right in Haas’ native Austria, lit up the Southbank Centre's Queen Elizabeth Hall in 2013. More recently, Claire Booth sung the subtle, Sappho-based song cycle Atthis in Covent Garden’s Linbury Studio, accompanied by a dance performance of Haas’ String Quartet No. 2. Now, the spectralist maestro is bringing his ever-shifting tapestries of sound to the Royal Opera House’s main stage, with the specifically commissioned Morgen und Abend.

The synopsis – tracking a man’s birth, his life as a fisherman, conversations with deceased loved ones and final revelation that he is himself dead – might sound uncompromisingly minimal and unpromisingly vague, but two superb collaborators suggest great things might be afoot. The ever experimental Graham Vick, Birmingham Opera Company founder and an internationally successful director, will helm the production.

And the libretto comes courtesy of Jon Fosse (Melancholy), one of Norway’s finest writer's and the most performed living playwright in the world. His novel Morgon og kveld, which will be published in English by Dalkey Archive to correspond with this production, has been described as a mesmerising evocation of a single life, burning with Biblical prose and moments of quiet beauty. It seems the perfect fit for Haas’ soundscapes, which often ebb and flow like our perception of the passage of time.

The cast, too, promises to be extraordinary, though largely unfamiliar to the Anglophone public. Klaus Maria Brandauer, who stars as Olai, is an actor, film director and academic, best known outside Austria for scooping a Golden Globe award for Out of Africa. Michael Boder (Le Grand Macabre), renowned for imbuing contemporary music with a chromatic vitality, will conduct.

This might not be a crowd-pleaser, but for those in the know it could offer one of the defining cultural experiences of 2015.