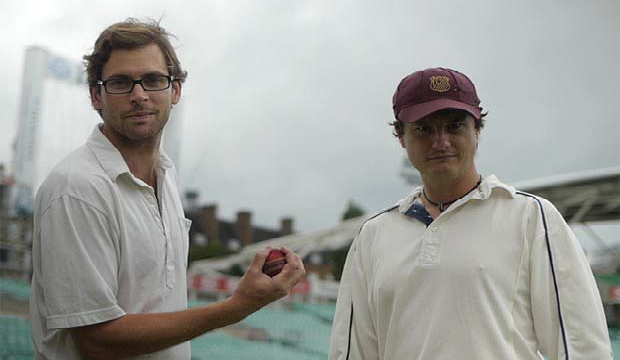 The pair’s history is in writing, but such was their strength of feeling apropos the future of test cricket – the longer form of the game – they decided to make a film about it. The whole filmmaking process, from start to finish, lasted four years.

Understandably, given that the film is an investigation of the moment, the landscape changed considerably from when filming began. Collins would have interviewed key power brokers Giles Clarke and N. Srinivasan further down the line, in light of fresh scandal. Still, their encounters with the ‘two Bond villains’, as Collins describes them, make for dramatic viewing.

‘If I may use a football analogy, interviewing Clarke was like an away game at Old Trafford,’ he says of the ECB’s chairman. ‘He was always going to go on the attack which left us space to exploit. He was great because he came out all guns blazing.

‘Srinivasan was inscrutable. He acted and spoke in such a way it was clear he knew he had a lot of people under his thumb.’

Indeed, much of the film focuses on the power the Indian cricketing authorities – along with their English and Australian counterparts – hold over the sport globally, and the wider problems that brings. The directors bring to light one fundamental, and uncomfortable truth: money and cricket now go hand in hand; inseparable partners in the 'Gentleman's Game'.

The film is made against the backdrop of a young Australian cricketer, Eddie Cowan, beginning his own test career. It is here that Collins' and Kimber’s love of the sport shines through, and the former reveals his passion for cricket has remained undimmed despite the numerable negatives their documentary uncovered.

That is why the pair chose to launch the #changecricket campaign. ‘We had a minute’s silence at the Oval before a day’s play at the Ashes this summer, which attracted a lot of publicity. We have been handing out flyers outside grounds letting people know about our cause, and getting in touch with MPs to try and take it to an audience beyond simply those in the game.

‘We are hoping for a moment or a revelation, similar to what has happened at FIFA, something that can start the process of reversing the inexcusable greed and mismanagement that is so powerfully damaging the greatest sport on earth.’

Death of a Gentleman is available now on DVD.