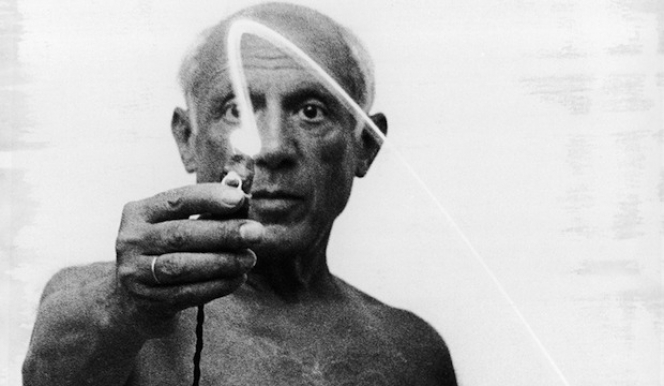 But does he have anything in common with his famous granddad? Yes – my nose! But not my hands'. But when it comes to artistic talent, Widmaier Picasso sees himself more as a producer: 'I’m not very artistic and I do not paint.' 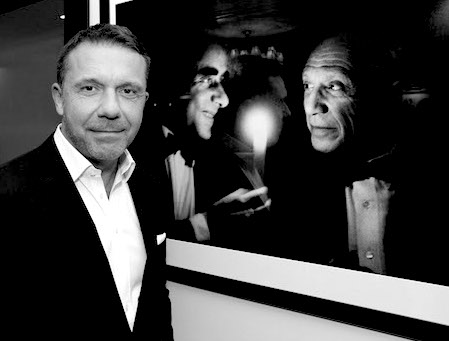 Widmaier Picasso is back in London to promote his latest project at the luxurious Sofitel St James Hotel, which gathers together photographs of artists in their studios from the archives of Paris Match, including Mr. Pablo Picasso himself.

But this isn't like a normal show. 'Unlike other exhibitions destined for museums or galleries'  Widmaier Picasso explains, 'I wanted it to feel intimate, like the artists’ studios portrayed in the exhibition; a home away from home'.

Pablo Picasso's work is certainly a comfortable subject for Widmaier Picasso, who's made a name writing and producing documentaries about his grandfather. But he argues that Pablo has only influenced his life 'by about 10%' 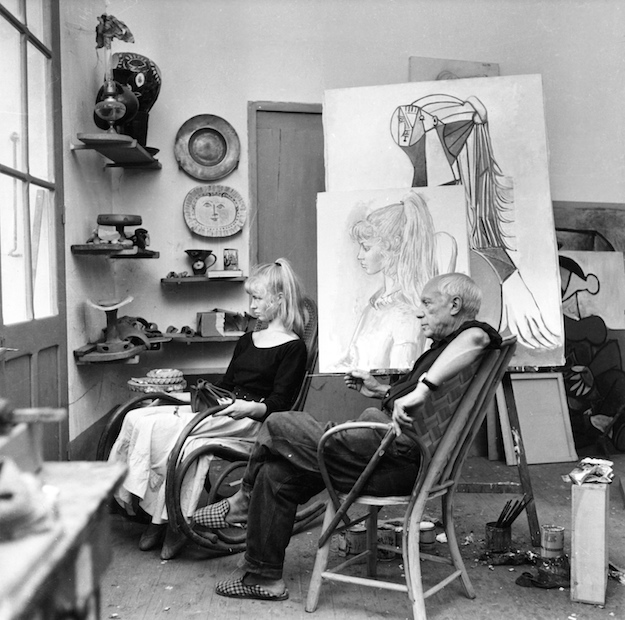 Olivier Widmaier's mother, Maya, was the daughter of Picasso and his young mistress Marie-Thérèse Walter - a relationship that began when she was just 17 and the 45 year old artist was married to Olga Khokhlova. 'My grandmother always used to describe him as terribly wonderful','Widmaier Picasso remembers.

Sadly for Widmaier Picasso, he actually never got to meet his grandfather, largely because his mother and father wanted him to have an ordinary start in life and hid the monthly cheques addressed from Monsieur Picasso. 'It was only after his death (when Widmaier Picasso was 12 years old) that I realised how important my grandfather was', he explains. 'This for me was a defining moment.' Ever since, it seems Olivier Picasso has been fascinated by the man, sparking the subject of his most famous book - Picasso: The Real Family Story (2004).

He was so delighted that Olivier Widmaier changed his name in 1986, something that was fairly common at the time after the French government altered the law and was a way to 'protect the originality of a name'. 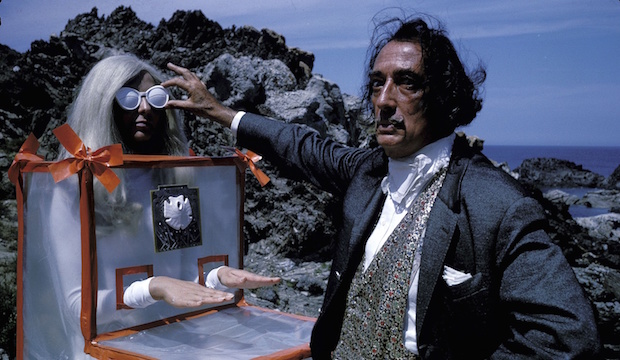 Scene around Venus for Salvador Dali

And Widmaier Picasso has not done badly from his family name. In 1999 he lead the profitable deal with Citroën to have the family car named a 'Picasso'. 'My grandfather is the most copied artist in the world. His name has now become a trademark and as a family we work hard to promote and protect this', Widmaier Picasso says.

But not all the family were thrilled about the agreement - Marina Picasso (the granddaughter of Marie-Thérèse's love rival) called it 'opportunism', despite also pocketing her share.

So how does Widmaier Picasso navigate the murky waters that lie between art historian and grandson? 'It's important to remain objective about (Picasso's) life in order to maintain integrity', he explains. 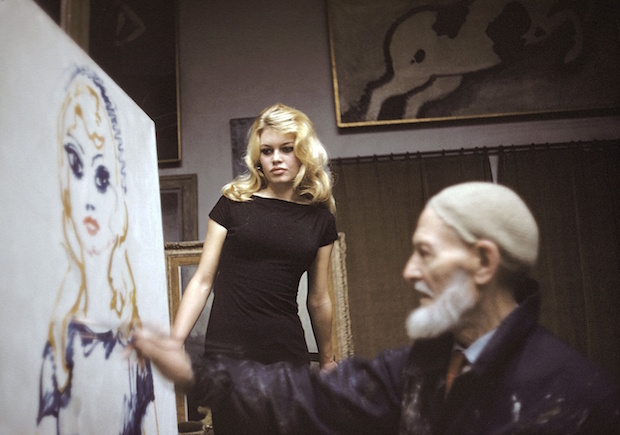 In the Sofitel St James exhibition there are several spectacular photographs of Picasso in his studio. Widmaier Picasso points out David Douglas' image of his grandfather with a fishbone as his particular favourite. 'The image is so special because it shows the intimacy of a man eating his lunch but also the work of an artist.'

In fact, Widmaier Picasso had plenty of photographs to choose from, as Pablo Picasso was permanently living with photographers in the 1950s. A particularly striking image shows the artist with a Dalmatian leaping up onto his lap. 'It's so interesting because it reveals how he used his whole house as a studio', Widmaier Picasso explains. 'I believe it really captures him because it shows the man and the artist are the same person.' 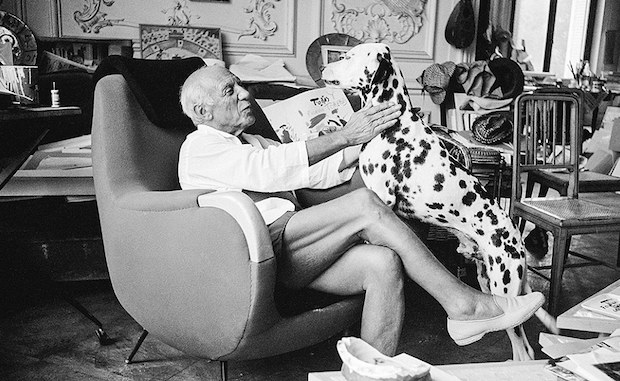 As the grandson of the most famous artist in the world, Widmaier Picasso has his own pretty impressive collection of Picasso art. 'One of my favourites is a painting I have in my bedroom at home called “Marie-Thérèse in a Red Beret and Fur Collar” (1937) of my grandmother'; a vibrant portrait of a young woman in vivid primary colours, her face splintered into jagged edges. But really it's impossible to choose across Picasso's widely varied practice: 'even though you may favour one period over another, you always have to respect that every art work means something different to someone'.

For Pablo Picasso, each phase of his artistic style was sparked by a new muse and romantic relationship. When he met Marie-Thérèse, he began a new series of sexually charged works of the beautiful round-faced blonde girl, her dreams filled with sexual promise. 'My grandfather needed many women to inspire his creations', Widmaier Picasso explains. 'Every woman was important to him and necessary to his work - I suppose that makes me less inspired than my grandfather!' Widmaier Picasso and Alice Evans (actress) were engaged a few years ago, but compared to his grandfather's Lothario ways, Olivier hasn't scratched the surface. 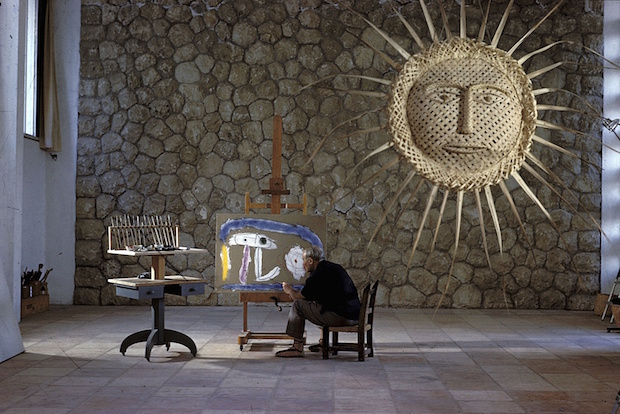 
There are plenty of misconceptions surrounding his grandfather that Widmaier Picasso wants to dismiss. So what was the man really like? 'At 92 years old he was still working as hard as ever. He was a force of nature'. So, even to his family, Pablo Picasso is more myth than man.