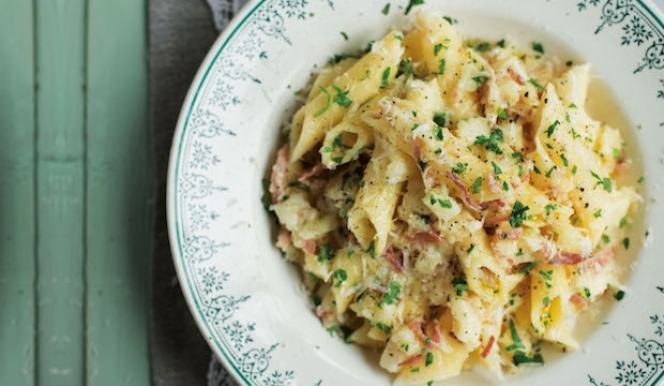 Not surprisingly, the focus of Antonio Carluccio’s Pasta is Italy’s most iconic dish. The chef gives us a step-by-step guide on how to make fresh pasta, offering a masterful blend of traditional (spaghetti aglio, olio e peperoncino) and unusual (chocolate fettuccine) recipes.

This classic pasta is tossed with slices of ham to make a hearty dish.

This is a new recipe. I have used celeriac, which I like very much, reduced to a pulp to form the basis of the sauce. The addition of ham in small strips (or smoked ham) lifts the sauce and makes it very appetising, though for a vegetarian version this can simply be omitted.

Melt the butter in a large saucepan and fry the onion for 5 minutes. Add the ham, and warm through. Set aside.

In a separate pan, cook the celeriac cubes in boiling salted water until very soft, about 10 minutes. Drain and add to the pan with the buttery onion. Squash it down a bit. Add the milk to make it more liquid, and warm through gently.

Cook the pennoni in plenty of boiling salted water for 8–10 minutes or until al dente. Drain and mix with the sauce in the pan. Sprinkle with the Parmesan and parsley, and lots of black pepper.

You could use macaroni, sedani, elbows or rigatoni.