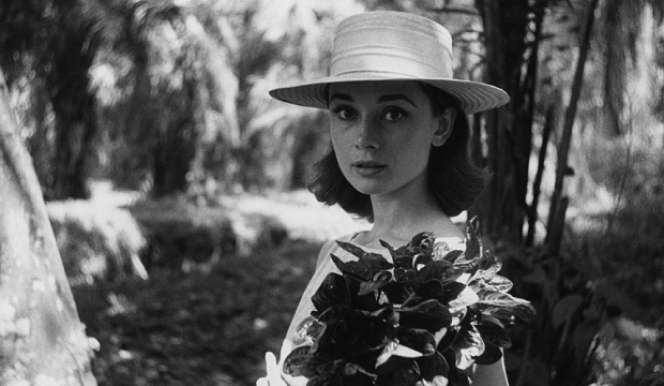 Audrey Hepburn on location in Africa for The Nun's Story by Leo Fuchs, 1958, copyright Leo Fuchs 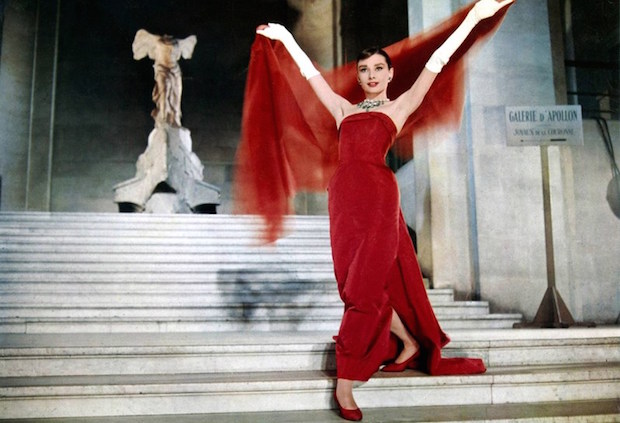 If you've come to the National Portrait Gallery Audrey Hepburn 2015 exhibition for a masterclass in golden Hollywood stardom, you're in the right place. This Audrey Hepburn show weaves through the highlights of the enchanting film star's career, from the chorus line at the London Hippodrome on the West End to Oscar-winning performances via the intimate moments of family life which have never been seen before. The result is spectacular - and completely satisfies our enduring love for the doe-eyed beauty that is Audrey Hepburn.

But can we really be bothered with another celebrity exhibition? It's true our obsession with Audrey Hepburn's gorgeous fashion sense, gazelle-like figure and dazzling personality shows no sign of easing-up, but what makes this starlet different from the others?

The National Portrait Gallery London Audrey Hepburn show is not just another excuse to plaster a famous face across the exhibition poster though (although it certainly doesn't hurt visitor numbers). This is a celebrity exhibition with a difference because Miss Holly Golightly has a side to her you never knew. While charismatic roles in iconic films like Breakfast at Tiffany's, My Fair Lady and Roman Holiday made her name, it is fascinating to see Hepburn in her other defining roles as a mother and humanitarian. It's also Nicholas Cullinan's first step into the limelight as National Portrait Gallery Director, and what a lovely show to kick off his career. 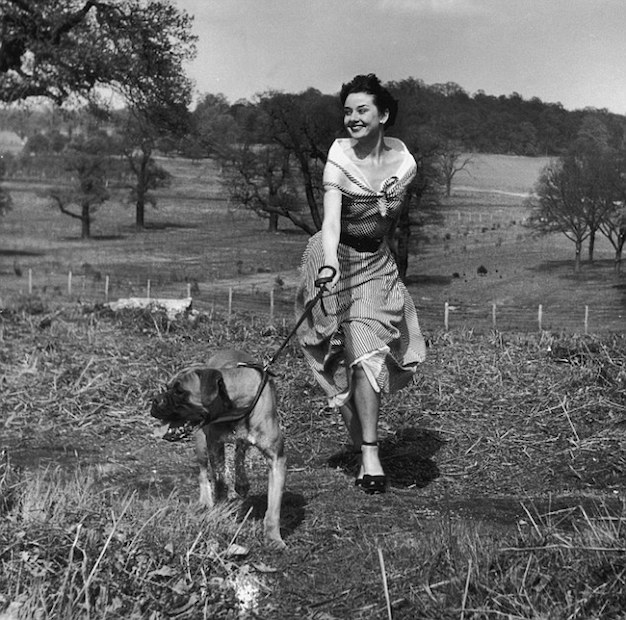 Audrey Hepburn's life is a whirlwind account of a young woman that beguiled everyone that crossed
her path. The NPG exhibition documents how Anthony Beauchamp first photographed a young dancer in the chorus of Sauce Tartare at the Cambridge Theatre in 1949, who quickly found herself on the cover of British Vogue. The daughter of a Dutch Baroness mother and Anglo-Irish father that lost everything in the Second World War, Beauchamp remembers '...all I was conscious of were the dancing eyes of that sprite in the chorus.'

Soon Audrey Hepburn was not just a nameless model, but had been cast with no acting experience at all as the lead in the new Broadway adaptation of Gigi (1951), having enchanted the writer Colette. Astonishingly, Hepburn went on to win a BAFTA and an Oscar for her first film role in Roman Holiday (1953) which cemented her position as a serious actress to be reckoned with. Images of the production of Roman Holiday in the National Portrait Gallery find Audrey giggling beside Gregory Peck on the Spanish Steps. 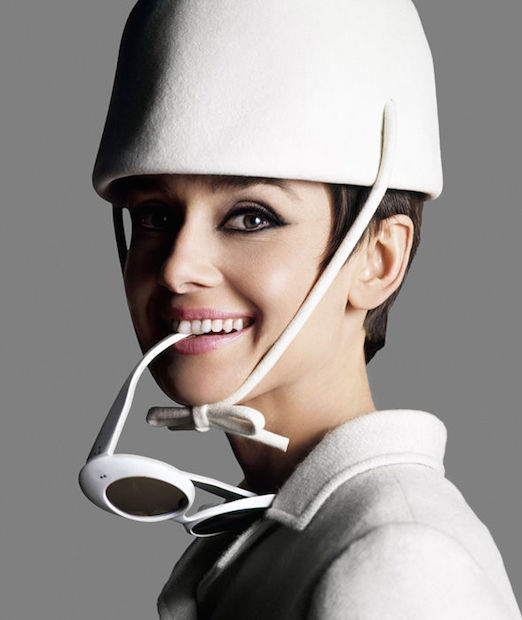 The show revels in the individuality of Audrey Hepburn's fashion choices, indebted to her close relationship with masterful designer Hubert de Givenchy, and the narrow waist and full pleated skirts of Christian Dior. Such was her status as a style-maker, that after War and Peace was released in 1955, Audrey's 'Natasha' haircut went stratospheric.

As a female film star in the wake of World War II, Hepburn also became synonymous with a new kind of femininity that was sweetly unself-conscious. But the innocence and vulnerability of characters like Princess Ann in Roman Holiday or Jo Stockton in Funny Face (1957) changed dramatically as Hepburn took on the defining role of Holly Golightly in Breakfast at Tiffany's (1961). Who can forget that famous elegant black column gown by Givenchy that Audrey wore for the film and the caramel tones of Moon River which became a landmark of modern cinema. 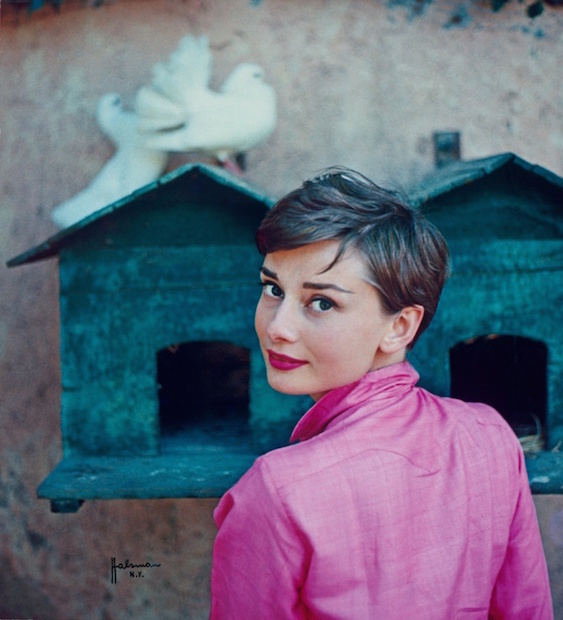 The National Portrait Gallery Audrey Hepburn exhibition finds a wonderful balance between glamorous images of the actress in her most famous roles and family snaps, shared for the first time by her sons, Sean Hepburn Ferrer and Luca Dotti. The cast of photographers on the walls of the NPG is astounding, from Cecil Beaton, Irving Penn, Norman Parkinson and Richard Averson to Terry O'Neil. Audrey also stands shoulder to shoulder with stellar leading men like Gregory Peck (Roman Holiday, 1953), James Garner (The Children's Hour, 1961), Peter O'Toole (How to Steal a Million, 1966) and even Sean Connery (Robin and Marian, 1976).

Particular highlights to look out for include Philippe Halsman's tremendous image of Hepburn on the cover of Life magazine (1955), dressed in crushed pink satin standing in front of a pair of white doves. You'll also want to see sultry Hepburn tangled in a net as the water sprite Ondine for her Tony award-winning performance in 1954 and on the steps of the Louvre in Funny Face, where her billowing red shawl mimics the Winged Victory of Samothrace behind her. 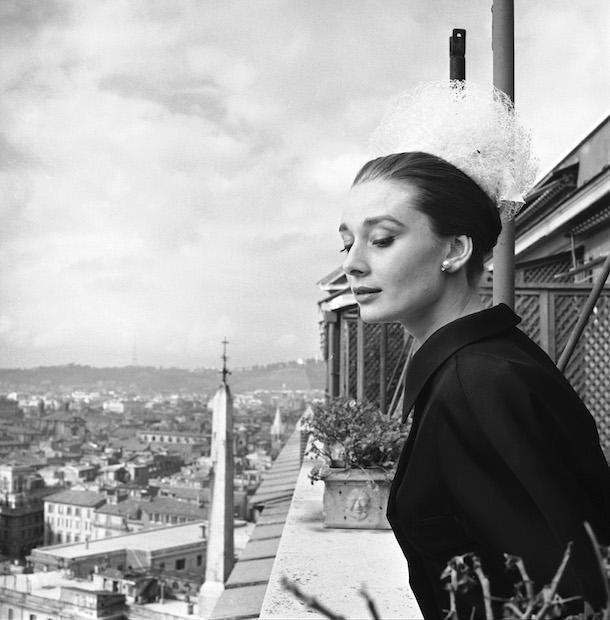 While Hollywood glamour is all well and good, this exhibition really reaches its stride in the later years when we stray from the classic photographs of Audrey Hepburn movies to her later career as a humanitarian. We often forget that Hepburn was also an International Goodwill Ambassador for Unicef that gave not just her name and image to the cause, but her time - travelling to 20 countries in 5 years. Even after she became too ill to travel in the 1990s, Hepburn continued to promote the cause. Striking images of Hepburn in Somalia, Ethiopia and Bangladesh featured in the show reveal her dedication to humanitarian work and her generous nature.

And while Hepburn is perhaps most recognisable with her long cigarette holder in Breakfast at Tiffany's, it is wonderful to find the actress's later years captured on film, through broken relationships, children, changing fashion trends and the evolution of film from the confines of the studio to outdoor filmmaking. It is as if Holly Golightly can finally break the pose, and reveal all the other sides to herself which made the actress so fascinating. Look out for the sensational photograph by Steven Meisel for the cover of Vanity Fair (1991) where Hepburn, aged 61, dances joyfully in the photographer's studio. 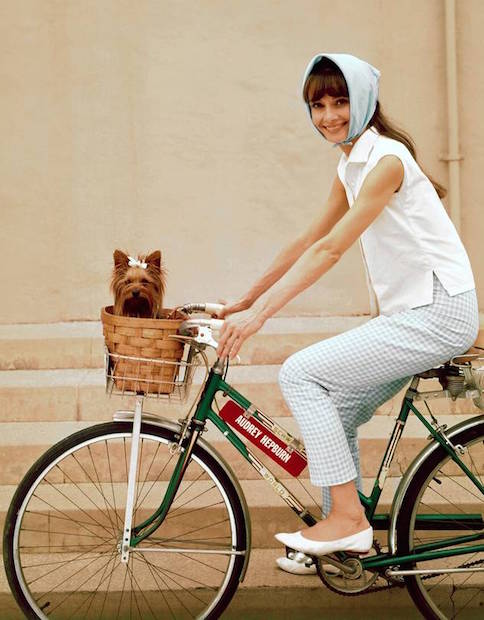 What have we learnt...

After the glitz, glamour and behind-the-scenes magic of this photography exhibition, the question still hangs in the air - who is Audrey Hepburn? Dancer, actress, mother or humanitarian? And perhaps that's why she has such an enduring likability that leaves us wanting more. She isn't just the bombshell we all recognise from the big screen. Hepburn's youngest son Luca explains that his mother was an incredibly humble person that would have been bemused by all the attention: 'I was asked to sing when I couldn't sing, to act when I couldn't act and to dance with Fred Astaire when I couldn't dance.' Well, she certainly pulled it off.

The Audrey Hepburn show, London's hottest ticket this summer does nothing particularly revolutionary - but it gives the people what they want, a heavy dose of doe-eyes, starry Hollywood glamour and an intimate look at the joyful character that still inspires magic today.