Balancing comedy and tragedy, The Seagull brings out the playfulness of Chekov for an entertaining evening under the night sky 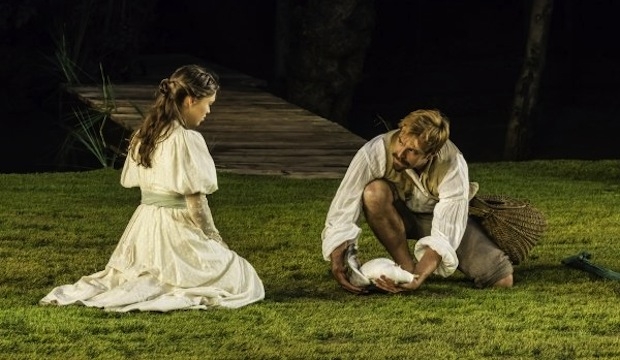 The Seagull, Chekov's most famous work spotlights on the Russian intelligentsia and middle classes holidaying in the countryside for the summer. With evident parallels to Hamlet, the play centres around Arkadina, an old actress, her disillusioned son Kostya and her lover Trigorin. Meanwhile the play concerns itself with greater ideas of art, the purpose of theatre and whether it can reflect reality. As it opens Kostya is attempting to redefine ideas of theatre with a new form abstract play. The masque becomes a complex trope in the narrative as layers of reality and concepts of performance clang harshly with the natural world (beautifully illustrated within the leafy surroundings of Regents Park Open Air Theatre). Meanwhile The Seagull plot whirls around forbidden and refuted loves, aspiration and ideas of class. A seagull shot by Kostya for his girlfriend Nina becomes a poignant symbol for ideals and innocence. As the play thunders to an end the characters are confronted with harsh realities and damming truths.

This production saw an array of old hands take to the stage. The acting wasn't standout but strong. Janie Dee (Midsummer Murders, Ah! Wildernes) was an enjoyable Arkadina, capturing the comedy of a has been actress and imbuing the role with weighty significance as the tragedy built to a climax. Matthew Tennyson (Midsummer Nights Dream) was good as Koysta, portraying the sensitivity of a disenfranchised son well, though at times veered towards melodrama. As Nina, Sabrina Bartlett evoked a sense of naiveté well in the first half and Lisa Diveny entertained as the distraught, love sick Masha. Each member of the team was individually compelling. However it felt as though they were limited by the script in which the characters could only be inhabited so far. At times, mannerisms verged on pantomime, and one wondered whether the two servants (Tom Greaves and Tara D'Arquain) who spent most of the time faux giggling at the other characters from a distance were surplus to the cast, their roles serving to overemphasise ideas of theatre which knocked audiences out of the Chekovian world.

The staging was cinematic and sometimes spectacular. Working within a heavy symbolist troupe director Matthew Dunster (1984) created a world in which a giant mirror was literally held up to nature and where lighting powerfully conveyed mood . Foreboding sounds which thundered around the amphitheatre at significant moments erred on irritating but created a heightened reality and general sense of theatre which audiences were clearly there to see.The second half swathed audiences in darkness and the natural world was infused powerfully with the onstage action.

Grievances with the new production of The Seagull stem from Torben Betts' (Invincible, Downhill) new adaptation. Whilst for the most part Betts straddled the gap between entertainment and tragedy enjoyably, the dialogue failed to convince at crucial moments and sometimes felt downright lazy: Everything in this life falls apart: joy, misery, success, failure. However there also flashes of sustained immersion, when Betts skilfully fused a Chekovian voice for contemporary times. On press night the audience particularly enjoyed Boris Trogorin's (Alex Robertson) proclamation that critics are of course a much lower life form.

In all, an enjoyable performance which gained momentum as the sun went down and become more enthralling as characters strove towards the tragic climax. With seagulls flying over head, Regent's Park Open Air Theatre seemed the perfect place to stage Chekov.