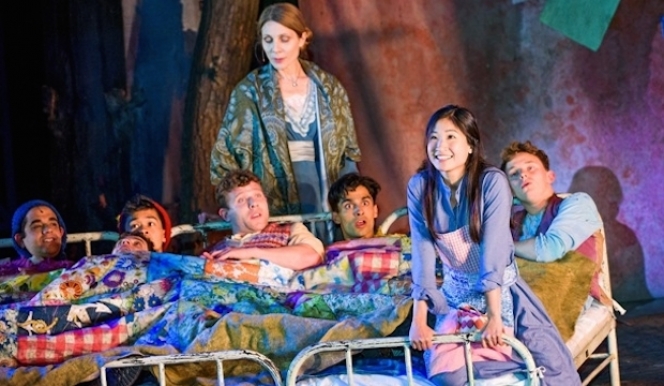 Peter Pan at Regent's Park Open Air Theatre
Set against the backdrop of a WW1 nursing station, this poignant revival of Peter Pan sheds new light on the nature of lost boys and what it is to grow up.

A medley of war songs and nursery rhymes sets the scene and Pan’s motley crew of motherless boys are injured soldiers.

The production benefits from the same focus on story-telling that artistic director Timothy Sheader used so effectively in his production of To Kill a Mockingbird. We are transported from the nursing station into the magical world of Peter Pan, as the nurse reads the story and the scene shifts to the Darling family nursery.

Jon Bausor’s set is a joy, full of surprises that had audience members of all ages gasping: spring blooms, a Wendy House is created with charmingly childish imagination, it’s a magical mermaid lagoon, then a swashbuckling pirate ship.

Along with this impressive use of the open air stage, it was the detailed touches of tradition and the undertone of trench warfare that charmed us: fish are swishing pyjamas, mermaids have gas mask faces and below the action below the stage elegantly echoes trenches.

The flying is a feat to behold: soldiers, climbing up and sown scaffolding pillars, balance the weight the actors soaring across the sky. The puppetry is top-notch. If there we some little ones disappointed not to have seen a real fairy, an endearing and obnoxious Tinkerbell, crafted from gas lamps and brought to life with gusto by Rachel Donovan, will have quickly won them over.

Acting across the board is full of fun and energy. Hiran Abeysekera’s Peter Pan combines sprightly imp with a dash of droll humour. The lost boys capture the cadences of children without verging into parody (we particularly liked Eben Figueiredo’s over-excited and hilarious Tootles). Beverly Rudd’s Smee was the children’s favourite. The pirates hold enough peril to grip but won’t give the children nightmares. And an army officer Captain Hook meets his toothy end in a spectacular feat of staging.

Instead of trying to reconciled the jarring maternal fixation of J.M Barrie’s original, this interpretation plays it up: a jocular Smee makes a groupie banner begging ‘Wendy, be my mother’, and a dislocated Mrs Darling haunts the stage with mournful song.

It’s rare to find a show that can delight young and old in equal measure, but Peter Pan pulls it off. There’s an enlightening interpretation to the original that will touch adults, and copious adventure, excitement and wonder to keep kids enthralled.