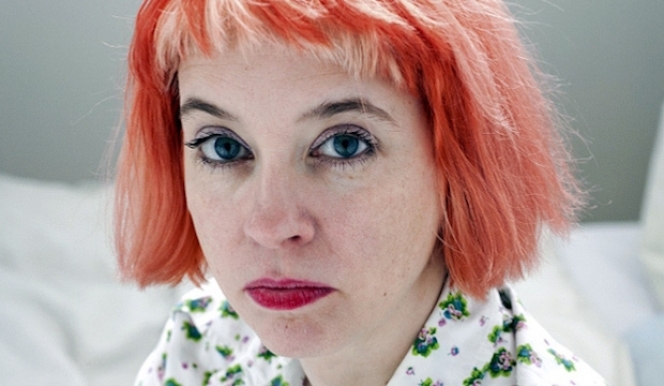 If you haven't heard of director Carol Morley yet, you're in for a treat. The intimidatingly impressive director is causing quite a stir, bringing, in our opinion, a contender for best film of 2015 so far. Culture Whisper caught up with the woman of the moment.

Carol Morley is used to making documentaries. Her film debut The Alcohol Years was an autiobiographical documentary set in '80s Manchester. Her biggest success was Dreams of a Life, a docu-drama about loneliness.

Her latest, The Falling, is an ambitious move into the realm of fiction. Starring Maisie Williams (actress who plays Arya on Game of Thrones); Maxine Peake and newcomer Florence Pugh, The Falling tells of a group of sixties teenagers, in a sleepy Oxfordshire school that is gripped by a mass fainting epidemic. As their sense of reality begins to waver, identities are called into question and the film takes a turn for the surreal.

When she began her research ten years ago, Morley realised that a lot of such stories about such illnesses "are set in schools, single sex schools, often with young women."

In a tale of peer pressure that holds up a mirror to Arthur Miller's Crucible, The Falling tells of sixteen-year old best friends Lydia and Abbie, who are on the brink of adulthood. As the pair struggle in their own ways to come to terms with the changes they are going through, and their increasingly complex emotions, a fainting and twitching outbreak is simultaneously spreading thoughout the school. 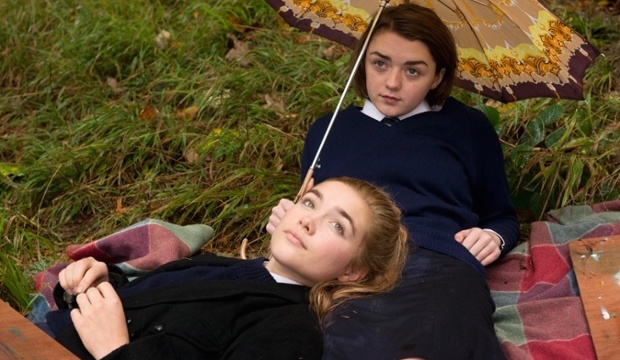 "I think something attracted me to the idea of a collective protest, which you could see, but at the heart of it is an exploration of loneliness and outsiderness, and the sense that you don't quite 'fit in'."

"People who are on the margins – either emotionally or physically – do interest me. I don't know if anyone really feels like they belong in the centre, or are there. I’ve never met anyone who does. I think everyone feels like they're not quite doing it right, or they’re not quite themselves. I find that very dramatically interesting."

As the onlooking teachers attempt to figure out whether it's all pretense, mass hysteria or something more sinister, each character's grip on reality begins to falter. As her life unravels, Lydia (Maisie Williams, Game of Thrones) comes to discover alarming truths about her own identity.

This sense of 'perception versus reality' is what, for Morley, drives the film's narrative. Abigail, Florence Pugh's character, is perceived as the 'cool girl' of the school, but "actually she’s going through all these things that she can’t understand."

"Everyone in The Falling" says Morley, "especially because it’s so acute at that age – is sort of grappling with who they are." As Maisie Williams’ character Lydia says to her psychiatrist: 'We are all three people: the person we think we are, the person other people see and the person we really are.' " 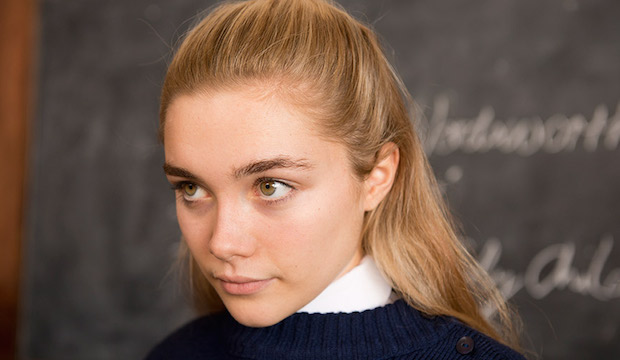 One of Morley's main aims is to open the film up to as wide an audience as possible. Whilst the coming-of-age aspect is key to the film's plot, many of the older characters – Eileen, played by Maxine Peake, and the school's headmistress, played by Monica Dolan – have as much screen time as the younger ones.

"The adults are not just the 'baddies', they're not just people trying to stop the young from expressing themselves. There's a whole complex array of emotions throughout. And there's judgement – I also wanted to look at the judgement of the young on the old."

This conflict of sympathies is one of the most palpable elements in Morley's film. Watching The Falling, you're made to feel both like an outsider and at the centre of its surreal universe. The complex relationships between characters are shown, as it were, in media res. "The mother-daughter relationship is problematic. I think it's a difficult one to explore, but I really wanted people to feel that they could situate themselves in it."

With its punchy prog-rock soundtrack from Tracey Thorn (Everything But The Girl) and cinematography that's as luxurious as a pre-Raphaelite painting from Agnès Godard (Beau Travail), The Falling steadily mounts to an eerie crescendo as it paints a surreal – and often disturbingly sensual – picture of adolescence, combined with the banality of life in a rural English town.

"We think of those years as the 'Swinging Sixties', but in reality it was probably just a few hundred people on the King’s Road...I wanted to look at a Sixties that was still tied up in the Second World War for the older people. And then the young people suddenly had what looked like a lot of freedom coming their way. There was a tension between the young and old in the late sixties that interested me." 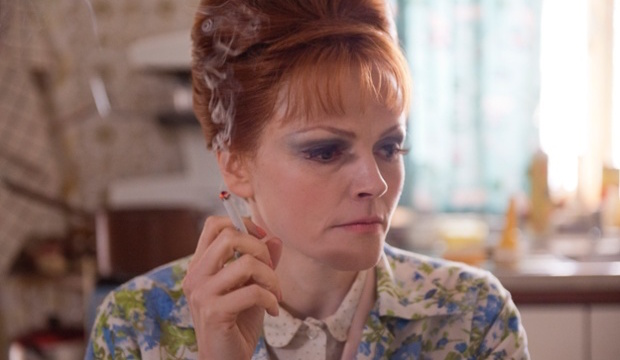 Maxine Peake in The Falling

In making The Falling, Morley did extensive research into the history and depictions of psychogenic illness. "Nowadays" says Morley, it's thought to be "a kind of reaction to toxicity, or chemicals in the food...but in the sixties they seem to be kind of connected to sexual anxiety."

Whilst the emotions that the film addresses are in many respects the universal teenage experience, The Falling also confronts a number of social difficulties faced by women at the time. "The abortion act came in around '68, '69: it was there, but it was actually very difficult to access. You had to be a married woman. There was contraception for women, but again you had to be married. So although it seems like the sixties were very swinging, there would have been a lot of unwanted pregnancies."

For Morley, then, it's the tension between perceptions of female empowerment and the reality of life at the time. "I felt everything was on the cusp of perceived changes – there were some very dramatic changes: women taking control of their sexuality, for example, and Second Wave Feminism coming in. But it wasn't fully realised. It always takes a lot longer than, historically, it looks like it did. And it still hasn’t fully happened."

The Falling is a rare thing. Bringing female-focused filmmaking to the fore: a sharp, brilliantly realised exploration of loneliness, adolescence and identity.

Catch a screening of The Falling, followed by a Carol Morley interview and Curzon Soho Q&A on 24 April at 6.15pm.

I've lived in East London, in Whitechapel, since 1999. I try and avoid the pubs too much, because you could just end up staying there forever. But I really love The Carpenters Arms, round the back. And I walk down the river to The Grape sometimes. So you get the best of both worlds. Indo on Whitechapel High Street is a good bar. And Genesis cinema in Mile End – that’s good. And Rich Mix and Barbican. I like walking past the Match Factory, where the match girls went on strike. I love East End history. I love walking around London – you can turn a corner and find something you’ve not seen before. It’s very exciting.

The above is our Carol Morley interview: to read our preview with background information on The Falling – film plot, and Carol Morley Curzon Soho Q&A – click here.

Cinemas in London showing The Falling

The cinema has a reputation for screening challenging and unusual films, as well as hosting Q&As with top directors and actors (Ryan Gosling made a recent appearance) and tempting customers with the delectable baked goods of Konditor and Cook.
Click here for other suggestions of what’s on at the Curzon Soho this weekend

– Cinemas showing The Falling in South London: The Ritzy (plus Carol Morley Q&A on Tuesday 28 April)

Brixton's historic Ritzy is known for its relaxed atmosphere and eclectic programme of art-house films, documentaries and Hollywood   blockbusters. The range of craft beers on offer make The Ritzy a cut above the rest.
Click here for other suggestions of what’s on at the Ritzy this weekend.

The Barbican’s brutalist architecture may divide opinion, but its cinema – which often hosts film festivals and plays old classics – is definitely worth a visit. There is also a generous range of discounts for 16-25s: click here to find out more.
Click here for other suggestions of what’s on at the The Barbican this weekend.

– Cinemas showing The Falling in West London: The Curzon Victoria

Surreptitiously housed in this minimalist, glass-fronted building, the new Curzon Victoria looks more like a private member’s bar than a cinema. Stylishly lit, with spacious seats housed in intimate, comfortable screening rooms, it's a gem that's still relatively unknown.
Click here for other suggestions of what’s on at the Curzon Victoria this weekend.

If none of our suggestions take your fancy, check out the complete cinema listings for The Falling in London: The Falling film times, London