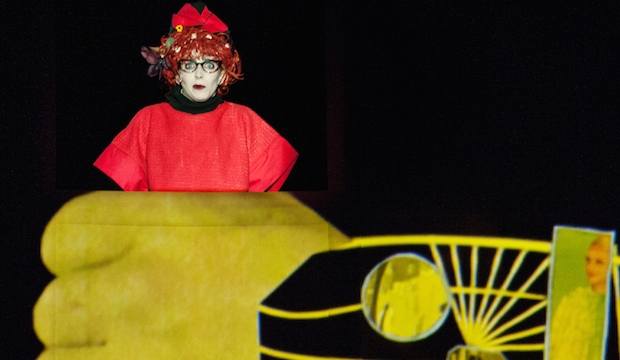 There was no single lightbulb moment for Theatre Company 1927, the movers and shakers behind sellout shows The Animals and Children Took to the Streets and Golem. Instead, writer Suzanne Andrade, artist Paul Barritt, actor/ associate director Esme Appleton and pianist Lillian Henry joined forces organically.

'Suzanne and I were best friends at college' Appleton explains. 'I acted in her Masters project – we even used overhead projectors'. Creativity and performance was just what they did: from 'stand-up comedy dressed as a big bee', which Appleton filmed ('I was so nervous I drank too much beer and only got her first half on film so there’s no proper footage of it'), to persuading the BBC producers to play Andrade's poetry on the radio.

And it was this fateful broadcast that brought the founding trio together. On the night she moved down to London, Appleton was listening in the car. ‘That same night Paul [Barritt] heard Suz’s poems for the first time.'

Immediately impressed, Barritt got in touch to buy a CD but Andrade suggested swapping one for one of his illustrations. When the trio met up at the Poetry Café in Covent Garden their mutual interests were obvious, and the seeds of 1927 theatre were sown.

A shared fascination with silent films – the name 1927 is the year that ‘talkies’ were invented --  comic books and 'everything we're surrounded by' inspired a collaborative approach between animation and performance.

‘First it was quite separate... just making films to go with poetry’ Appleton explains, then ‘we started figuring out that we needed to do vignettes… we’d notice how a video would be playing over a person… as we went along we realised what we needed to do to make it work altogether’.

The first foray into fully integrating art, acting and music was ‘dodgy’, Appleton laughs, remembering a ‘very performance arty’ film where she cradled a sheep skull like a baby.

Reflecting the organic beginning, the roles are fluid and the focus is on collaboration. Appleton feels ‘a bit uncomfortable’ with her official title of ‘associate director’: ‘it’s someone who writes notes – but I am very much more hands on’, she explains. As well as contributing to the creation of new work, she also performs in the final product. ‘I’m very visual so I come up with some of the interactions and how to bring the animation alive’.

Golem - from the Young Vic to Trafalgar Studios

The team have been fascinated by the Golem myth for years. 'This idea that man creates this being and how he could use it for good, and could do these amazing things with it… You can use technology in such good ways – or abuse it.'

‘What we do use it for is showing how many friends we have or just for entertainment. We’re riding the wave of the invention of the computer and not really pushing it forward.'

The capacity of digital invention is not just a theme of 1927’s work, but a foundation. In Animals and Children Took to the Streets, the whole show was created with just a laptop. The actors had to keep to the timing of the film running and to fit in with ‘about ten different cues’.

Anyone who's had the pleasure of watching a 1927 show will have been struck by the flawless interaction between performer and picture, and with Golem the stakes have been upped. This is the first time 1927 have used a new machine: ‘a massive thing called a CAT... It's brilliant for the rehearsal process' Appleton explains. The CAT enables the format of interacting with animations to develop from ten perfectly timed interactions with animations to '420'. 'It's really easy to use and run the films now -- we're improving.'

But technological advancement is also 'a paradox -- you're using something really positively, but we can't tour like we did. It's less portable.' There's a sense of nostalgia when Appleton describes how this 'beast' of a machine has streamlined the rehearsal and performance process. Yes, it's easier, but 'I actually like the more tricksy bits', she admits.

And now, having impressed as the 'sane' sister to a monstrous brother with aplomb in Golem at the Young Vic and on a global tour, Esme Appleton is handing over her role to actress Charlotte Dubery for the West End transfer.

'You can’t do two things at the same time, so I had to pick between touring and making work', she explains ruefully.

This exciting 'new work' is a collaboration with The Komische Opera Berlin. Having already worked together on The Magic Flute, 1927 will now be working with the opera company to revitalise Petrushka and L’Enfant et les sortilèges (The Child and the Enchantments) with their trademark magic visuals.

'It’s about experimenting still - playing around with what one projector can do with one tiny room and making things a bit more simple again, at the same time as working on these big projects' Appleton explains.