The talented young choreographer George Williamson tells CW he wants to bring the excitement of ballet to new audiences. 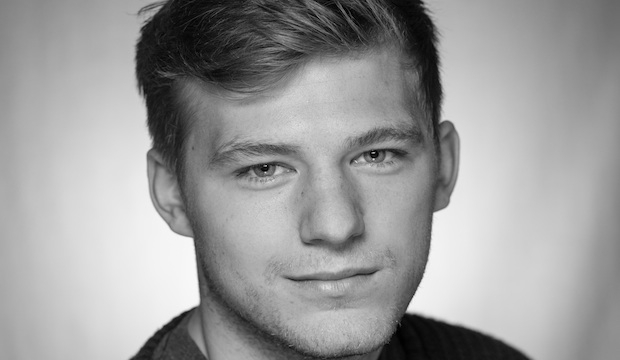 George Williamson
There’s definitely a bit of a buzz swirling around young George Williamson. Still in his early 20s he’s being touted as perhaps the next big name in ballet choreography. And although some in ballet circles still find him an enigma (more on that in a moment), his early work was strong enough to catch the eye of the notoriously demanding Tamara Rojo.

Just over two years ago Rojo appointed Williamson Artistic Associate of English National Ballet (ENB), where she is Artistic Director.

It was an opportunity Williamson jumped at. Talking to Culture Whisper in a London dance studio during a break in rehearsals for My First Ballet Swan Lake, Williamson said:

“As Artistic Associate it’s my role to broaden the relationship between the company and the school; but for me as a choreographer My First Ballet is an opportunity to learn and hone my skills. I’m really interested in working in narrative ballet.”

So far, Williamson has taken charge of adapting three staples of the classical repertoire, Cinderella, Coppelia and Swan Lake – all narrative ballets – for small children, as part of ENB’s My First Ballet series. They provide good practice.

“I wouldn't say these are exactly in my style; they have their own style, but it’s a workshopping tool for me to be able to develop my skills and tell a story. With these, because we’re having to reduce and refine the story and make it into a very clear and succinct narrative, that’s a theatrical skill that’s very useful.”

Choreography has always been George’s thing. While still a student at English National Ballet School, he won the choreographic award three years running. And yet, upon graduation in 2010, he took on a dancing job with the Polish National Ballet – a long way away from his native Worcestershire…

“Although I knew I wanted to choreograph from about the age of 16, and everybody around me was being very supportive, I didn't feel at the time of graduating that I could go straight into choreography. I wouldn't have been able to pay any bills. And I thought it was important to be able to dance for a while.”

He stayed one year. He liked the big old Warsaw opera house and says he learned a lot about the theatre there. Most importantly, though, he made contacts that are now bearing fruit in his preferred career as a fully-fledged choreographer.

“It’s about a very complicated Lithuanian myth, called Egle, Queen of the Serpents. It’s a two Act ballet running about two hours with a cast of 30. It opens in November in Lithuania.”

That’s all Williamson will say about his very first full-length narrative ballet for now. Maybe the myth of Egle is too complicated for words…

However, he’s shown no reticence in handling, and in the process completely changing , a much-cherished staple of the classical repertoire, Stravinsky’s Firebird. This was his first commission for the English National Ballet and premiéred at the London Coliseum in 2012.

Rather than tinker with the Russian folk-take of the Prince who, with the help of the Firebird, manages to liberate the maidens held captive in the Enchanted Garden of the Immortal Kostchei, Williamson set about creating an entire new story, one with an ecological theme, where the central character represented a much abused and despoiled planet Earth

The critics were not entirely convinced. This was Ismene Brown’s take on it: “It’s a very young man’s viewpoint on ballet (…). But boy, what confidence. George Williamson is undoubtedly a talent to watch.”

While watching, though, some feel they can’t quite discern where Williamson is going. He’s been described as a bit of an enigma. So I asked him to lift the veil a little, help us decipher the enigma.

“Maybe I’m an enigma in the sense that I haven’t come through the most practical way of going through things; and also because I haven’t had as much exposure as someone who’s linked to the Royal Ballet and has one piece commissioned each year.

“With me, my one first piece was Firebird, which was a bold and different take on that ballet. I think that really sums up what I want to do with ballet; not necessarily reinvent classics, but create new stories and breathe life into the classical foundations but take them into modern movement.

“ I really believe that the classical foundation and the classical choreography can be developed for a modern audience, to try and tell more modern and contemporary stories and give new audiences a fresh take on what ballet can offer as a narrative art form. And also to make exciting and bold abstract pieces as well.”

As a mission statement, you can’t get clearer than that. Confident. Bold. And determined to bring what he calls “the visceral excitement of ballet” to young audiences.

George Williamson is most certainly a talent to watch.