Wayne McGregor | Random Dance: Atomos, review by Ruth Mattock, is a cognitive pleasure rather than an emotional one. 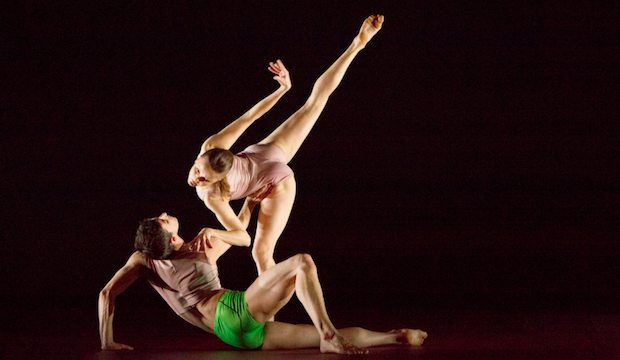 Atomos, photo by Ravi Deepres
Wayne McGregor’s technology-inspired, architecture-infused Atomos opens under a thick red square of light. Dancers gesture tightly within it, until lifts and legs break free of the solid edges into the surrounding dark.

The stage is lit throughout with Lucy Carter’s graphic red and green squares, varying in shade like a colour chart, and the dancers’ green and maroon leotards slide in among the tones. These striking patterns map out the stage throughout, forcing angles on the fluid patterns of the dance.

When we entered the theatre we were given a pair of 3D glasses - a very McGregor-ish addition, but one that only leads to anti-climax when a number of screens descend over the stage, playing pale imagery of the dancers moving below them. They’re a distraction from the movement and their purpose is unclear.

Atomos is much more patterned than many of McGregor’s works, scattered with brief moments of unison under pirouettes and jumps. The light touch of classical vocabulary throws McGregor’s more familiar, animal steps into relief. They run over the music, ignoring the moments when it soars to maintain a constant, athletic drive. It’s a noble aim to protect the dance from the emotional dictates of music, but a lack of clear symbiosis leaves the audience a little out in the cold.

Ultimately the reasons to see McGregor’s work are all present in Atomos. The relentless imagination in movement, shapes and limbs that make your breath catch, and dancers who move like beasts bred in the studio. Yet the enjoyment is a cognitive one, always processing the messages onstage. Just occasionally, one wishes McGregor would drop the reins, and abandon us to the show.