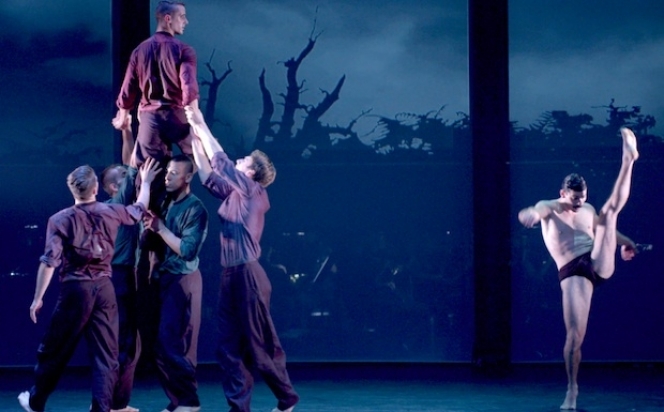 Nightmares
The experience of being male is so rarely a subject for dance, that’s almost reason enough to see this show. Choreographer Ivan Perez has made abstract and articulate scenes on several elements of war, from shell shock to training and the suppression of emotion required to survive.

The training scene, in which the dancers throw themselves relentlessly to the floor and into holds and jumps, is particularly powerful, and Andrea Carrucciu’s portrayal of entrapment in nightmare, gradually brought back by his companions, cuts to the quick. Composer Keaton Henson’s score swells relentlessly, the musicians cloaked in darkness at the back of the stage.

The low, powerful movement was similar throughout, and some critics found this tedious, but it’s a style that shows off the cohesion and strength of this troupe.

The lighting cast shadowy images under the dancers’ feet. In the final scene, columns of white sliced into the earth-strewn stage, trapping the soldiers as they fell in battle. Our last glimpse before the curtain falls is of harshly lit faces, staring accusingly into the audience.
Perhaps the show doesn’t come up to the very high expectations it set with last year’s preview. But the BalletBoyz have achieved something rare in performing the experience of Young Men, without stereotype and with humanity.