Back in 5 Minutes Supperclub, Brick Lane

Pull back a curtain at the back of Brick Lane boutique and you'll discover one of the best pop up restaurants London has to offer. 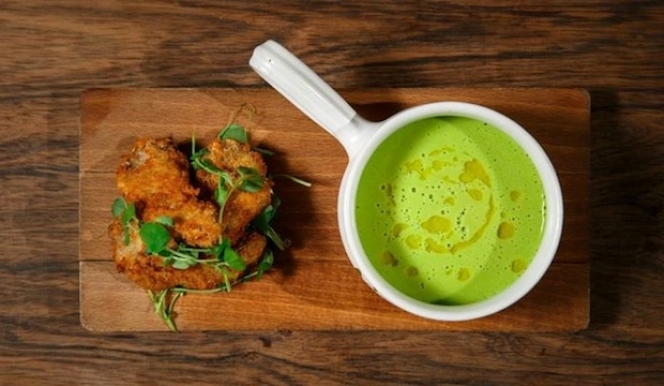 Back in 5 Minutes Supperclub, Brick Lane
If you’ve ever puzzled over what ‘Narnia meets a speakeasy’ might look like, then turn to Disappearing Dining Club’s long term Back In 5 Minutes supperclub for your answer.

A velvet curtain at the back of a clothes shop on Brick Lane conceals a thirty-seat dining space, with dim and sumptuous décor that hints at the seventies. Stopped clocks are scattered across the aubergine walls and un-intrusive, slick music keeps the atmosphere bubbling away.

Established by Stuart Langley and head-chef Fredrik Bolin, as one of Disappearing Dining Club’s many quirky endeavours, Back in 5 Minutes stands as an island of European cuisine in a sea of Bangladeshi curry houses and bagel shops.

Leave the hand-wipes at home. The current vogue for greasy, sauce-splattered American food has not claimed to the dining club's kitchen. This is unfussy, elegant fare. Bolin, formerly of Erik's and Zefferano & Glasshouse, uses his Michelin credentials to great effect.
The premise of the menu is simple and seasonal so one dish never sticks around for too long. However, do expect Bolin’s Swedish roots, alongside his experience in British, French and Italian kitchens, to act as strong influences.

The menu encompasses several distinct European flavours, and can move fluidly from salted cod croquettes with Mojo Rojo and fennel salad to smoked haddock rarebit with poached egg & toast. You might find a butternut squash and goat's cheese quinoa risotto, a gloriously rich cauliflower and truffle soup. Bolin bakes his own bread, smokes his own ham and churns his own butter. Love is smuggled into every ingredient. Being presented with "something from the kitchen" as the entree to our meal colluded, deliciously, with the quietly artisan feel that pervades the place.

From the mains, move onwards to desserts such as saffron poached pears with vanilla bavaroise, chocolate brownie topped with coconut ice-cream, decadent with a slick of salted caramel or a perfect apple and blackberry crumble in a pool of ginger custard.

The wine list is exemplary, ranging from £20-40 a bottle. You are able to choose between a two, three or six course tasting menu. Tables are communal, a la Ottolenghi, but everyone comes with friends, so you can be as friendly or unfriendly as you wish with other diners. The staff are courteous, the dishes prompt.

Pop ups have grown up. We're all regulars- and you should be too.

Every Wednesday to Saturday, from 6.30pm