The Book of Life

Film releases this month include director Guillermo del Toro's latest film 'The Book of Life', a bizarrely uncharacteristic but vibrant segue into the realm of children's fantasy 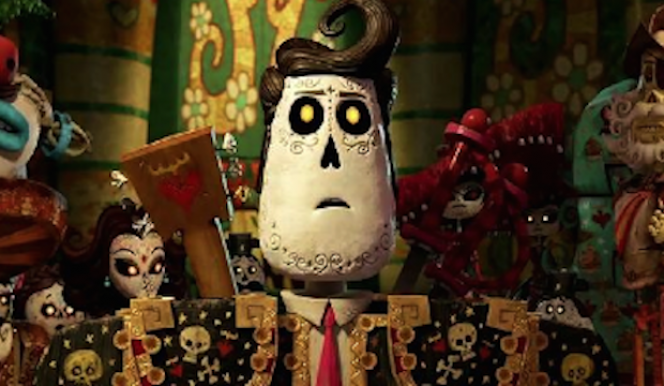 The Book of Life
When you think of Guillermo del Toro’s previous credits – Hellboy, Blade II, Pacific Rim – he seems an inappropriate candidate to be producing a 3D animated kids film. The Book Of Life, however, has del Toro’s fingerprints all over it and benefits greatly from the director’s unorthodox flair for the world of fantasy.

Inspired by ancient Mexican folklore of the links between the living and the dead, the story thrusts the audience into the world of the deceased. In the underworld, we discover, there are two universes – ‘The Land of Remembrance’ (for souls who are remembered by the living) and, more poignantly, ‘The Land of the Forgotten’ (for those whose lives are no longer remembered). It is a duality quite different from the Judeo-Christian notion of Heaven and Hell and a thought provoking one at that. Although these philosophical, theological explorations are likely to go over the heads of most children, the movie also boasts a charmingly orthodox plotline that is less likely to be beyond their reach.

We follow the romantic rivalry of the musician Manola, played by Diego Luna (Milk, The Terminal) and the soldier Joaquin, played by Channing Tatum (21 Jump Street, Magic Mike) both of whom compete for the hand of Maria. But Maria, played by Zoe Saldana (Guardians of the Glaxy, Star Trek Into Darkness), is no Disney female stereotype but a spunky, feminist heroine – an aspect of the film that has been much lauded. Gender typecasts are further challenged when Manolo, in spite of his skills as a bullfighter, refuses to engage in the ritual killing of the bull.

The Book of Life takes as much from Mexican culture for its aesthetic as it does for its content. Inspired by the traditional wooden toys of Mexico, the movie’s characters are unconventionally shaped, chunky rectangular heads and disproportionately sized hairstyles, all of which add to its imaginative charm. With strong themes and cliché busting characters, this is a film with something for both adults and children.