As Egon Schiele’s nudes cause a sensation at The Courtauld Gallery London exhibition, Alice Godwin discovers what all the fuss is about 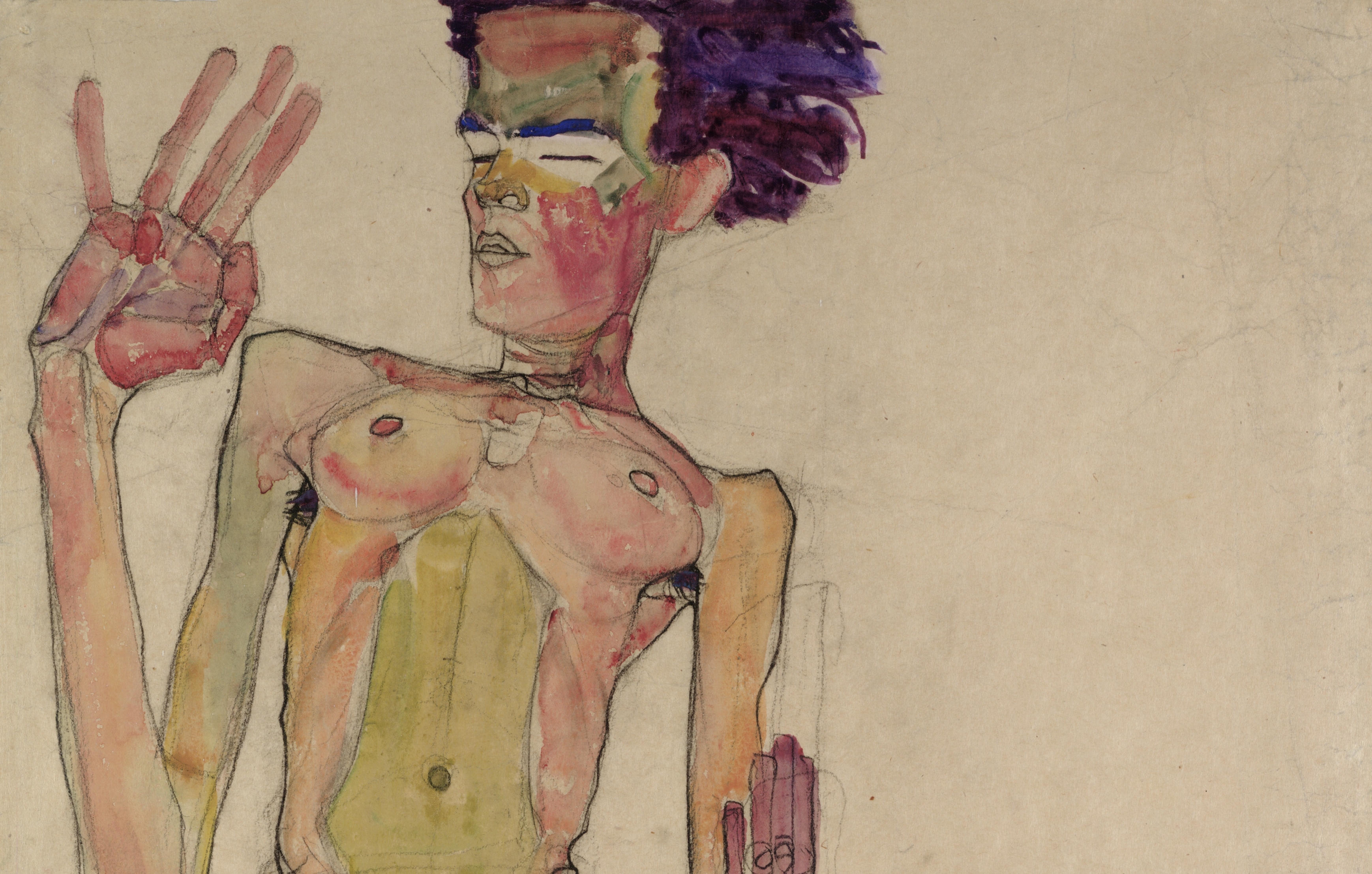 Egon Schiele (1890-1918) Kneeling Nude with Raised Hands (Self-Portrait), 1910 Black chalk and gouache on paper 63 x 45 cm The Leopold Museum, Vienna, courtesy of The Courtauld Gallery
Literally lifting the skirts of bourgeois respectability, Egon Schiele’s miraculous and unashamed nude drawings deserve far more notoriety than just their elicit subject matter. Glowering beneath folds of material, Schiele’s nudes are spectacularly modern, with a striking resemblance to another controversial artist, Tracey Emin. Glimpse the horrifying image ‘Mother and Child’ (1910) in the first room and you’ll quickly see how Schiele was using the traditional genre of the nude in a disconcertingly modern way, reimagining the Madonna as a gaunt prostitute with her young child clinging to her side.

Dr Barnaby Wright, curator of 20th Century Art at The Courtauld Gallery, explains how Schiele was ‘pushing the nude well beyond anything his contemporaries were doing’ as he lay bare ‘what he really felt human sexuality and desire was all about’. In this carefully curated display of Egon Schiele, Courtauld Gallery gives us a backstage look at the preparation for Egon Schiele’s paintings, in which he would have been far more restricted in his subject and treatment of the nude. These uncensored and highly personal sketches are the thrilling result.

These erotic and monumental drawings also make some interesting allusions towards Schiele’s bohemian personal life. It has even been suggested that the image of two women locked in a close embrace, ‘Two Girls Embracing (Friends)’ (1915), mirrors Schiele’s indecision between his lover Wally and wife Edith. In this exhibition The Courtauld has creatively woven Schiele’s biography, from his conscription during the First World War to his imprisonment in Neulengbach for kidnap, rape and public immorality, into the development of his draughtsmanship. We are also gently reminded how Schiele’s oeuvre was the product of contemporary Vienna, pulsating with Sigmund Freud’s latest sexual theories as well as the artistic output of the avant-garde contemporaries of Egon Schiele, Gustave Klimt and Oscar Kokoschka.

Of course it is easy to understand why Schiele has such a mixed reputation with unnerving images of the pregnant female, made possible by his friendship with the gynaecologist Erwin von Graff. In a sketch of one particular pregnant woman, the nude’s limbs are severed, leaving her swelling belly to consume the body in a mass of overheating red flesh.

But of course, Schiele did not just paint the female nude; he often used himself as a model. Dr Wright affirms, ‘he had this idea that if he was really going to tell the truth about the human condition through his art then he would always be condemned to be misunderstood by wider society. So he played this idea through his works that he had to be martyred for his art’. In the drawing ‘Nude Self-Portrait in Gray with Open Mouth’ (1910) Schiele contorts his own body into a crucifix, alluding to his identification with a Christ-like sacrifice.
Further surprises are the extraordinary surface effects of Schiele’s emaciated nudes which are at once fleshy and sculptural in their raw and flayed appearance. Pay attention also to Schiele’s fascinating use of colour which was carefully applied later in the studio after sketching his models from life as they lay on a mattress or a stair.

Much as Schiele ‘never expected his art to catch up with him in such a brutal and real way’ as a prison sentence, you’ll be surprised how much enjoyment there is to be taken from this exhibition. If you have been enthralled by the renaissance of Austrian/German art across London recently, with the opening of Anselm Kiefer at the Royal Academy and Sigmar Polke at Tate Modern, you will not want to miss Schiele’s high art nudes that lurk in the underclass of society in vice and prostitution at The Courtauld collection.

Not one for the faint hearted, bring children at your own peril to Egon Schiele London 2014 exhibition.