Tracey Emin: White Cube hosts the controversial artist’s 'The Last Great Adventure is you', her first at the London gallery in 5 years 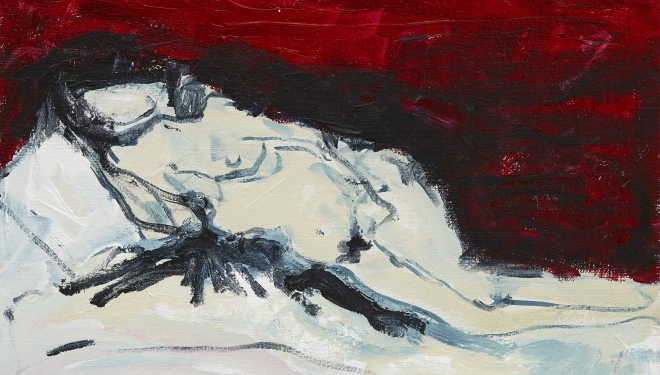 Tracey Emin, 'Good Red Love', 2014, © Tracey Emin. All rights reserved, DACS 2014 Photo: Ben Westoby Courtesy White Cube
“It’s better to make a small mess than a big one”, Tracey said about the scale of her works currently occupying the expansive walls of The White Cube. Emin's 'Good Red Love' (2014), at around about 8 x 12 inches, sits on the white walls that housed Gilbert and George’s gargantuan canvases earlier this year.

Only one large canvas (Devoured by You, 2014) in the South Gallery dares dimensions bigger than the average 10 x 12 inches. It’s something of a resignation. As she pointed out, scaling up would require years of practise and learning, so she reassures us, she’s working with what she has.

Her latest exhibition at the White Cube, 'The Last Great Adventure is You' is somehow, both resignation and renaissance. In her examination of self, at 51, Emin retains the contemplative, candid style that has been present throughout her body of work. She stressed that looking at her 51-year-old self in the mirror demands an acceptance that she wouldn’t have felt at 21. She seems at ease, and yet still urgent to explore and improve.

As former Eranda Professor of Drawing at the Royal Academy Schools (2011 - 13), it may come as a surprise that Emin recently felt the need to take up life drawing classes in New York. Walk the first corridor of this latest exhibition and her distinctive, energetic lines etching out her body prevail. Seemingly effortless, they represent a renewed consideration: they’re softer, somewhat aged in smoother gouache.

Take ‘So soft asleep’ (2014) the grey form is resplendently sleepy. In ‘Alone is ok’ (2014), there is again the same grey softness. By reconsidering, she’s versioning herself, and she’s seemingly reconciled with it. They represent a real departure from the harder, sketchier, more graphic blue ink drawings that appeared in 'Those who Suffer Love' (2009), at the White Cube 5 years ago.

Life drawing classes forced her to look again confront the body that she was drawing now, not the 20 year old self her pen had begun to complacently retreat to. There was a danger, she says, of her becoming “irresponsible” by depicting a romanticised version of her form, rather than really hitting “the thunder” of it. That she does with the deftly affirming, beautiful images that line the corridor. “The difference between before and after is unbelievable, in my drawing”, she says.

As well as polishing her practised media, she’s exploring new ones. This exhibition brings together the most significant body of bronzes she’s made to date. Love them or hate them, Emin declared, “I am having a really good time with what I’m doing.”

Resignation: “I am a lot more relaxed in my general feeling about things, I feel more resigned”

The prevalence of gouache and the lack of monoprints in this exhibition marks another new medium for Emin. She acknowledges that in order to use gouache, she’s had to become more fluid, more accepting. With drawing, you can paint over forms and re-sketch, gouache gives you one chance to put down what you want to say. And there is no compromise.

Her small-scale 'Good Red Love' (2014) depicts a peaceful nude, relaxed on a clean white bed, almost swathed by the vivid red background. Facing this final wall with Emin’s raw, tenderly crafted, if seemingly unfinished bronzes, suggests that she truly is at ease and going with it, both in who she is and what she is capable of making.

Musing over the title of the exhibition 'The Last Great Adventure is You' and the deliberation between choosing “you” or “me", Emin acknowledged the self-focused nature of her work. Her original vision for the exhibition was large mountain paintings with lovers in the foreground, the last great adventure with someone else in tow. She’s a self-confessed romantic - “in the Mills and Boon sense”, she smiled comically.

However, in considering what the last great adventure actually meant, it always came back to her own solitary figure so, she painted over the lovers. Look closely and you can see hints of another pencil beneath her finished work. For Emin, part of the adventure of being 51 and beyond is “understanding the past and putting yourself in line with the future”. Her eminence, eloquence and the sheer extent of her craftsmanship are spellbinding. Whether her work resonates with you or not, 'The Last Great Adventure is You' shows there’s no sign of relenting just yet. There’s life after 51, and plenty more to come…