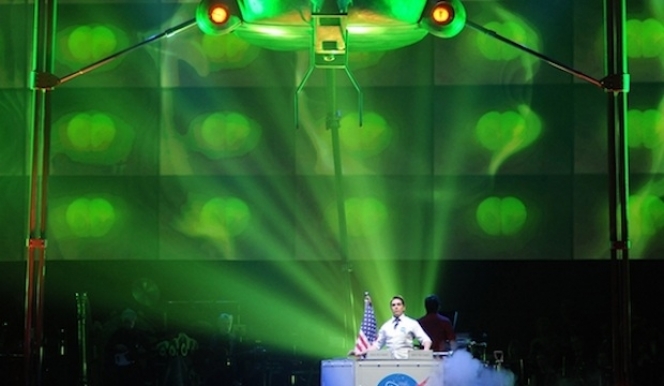 The War of the Worlds on stage
There have been many iterations of H G Wells’s hugely influential steam-punk Victorian sci-fi ground-breaker The War of the Worlds. But aside from a radio broadcast narrated by Orson Wells in 1938 (so chilling and plausible audiences genuinely believed the US was under attack) the most famous and enduring must surely be Jeff Wayne’s mighty prog rock concept album of 1978.

The young Jeff Wayne grew up in a family steeped in showbiz. Wayne senior had been Guys and Dolls’ very first Sky Masterson on Broadway; Jeff himself had composed numerous scores for film and television and in the mid-Seventies was touring with and writing music for new star David Essex.

‘My dad reminded me that my dream had always been to compose for myself – I’d been looking for a story I felt passionate about. He gave me The War of the Worlds to take on tour and as soon as I started reading it I began to hear sounds and music.’

The resulting double album of ‘symphonic rock’, with starry contributions from Richard Burton, David Essex, Justin Hayward of the Moody Blues, Phil Lynott of Thin Lizzy and actress Julie Covington, went on to become 39th best-selling album of all time in the UK.

It was subsequently adapted for the stage in amateur productions all over the world, but it wasn’t until 2006 that Wayne himself took the album on tour with a spectacular immersive production. ‘I’d been asked to do many live concert rendition but that didn’t excite me,’ he explains. ‘Theatre is as compelling as it gets and TWOTW has been a living work which has developed over time with new technology and effects.’

Now the tour is to draw to a close, to make way for a ‘new path’ for TWOTW which is currently being kept closely under wraps – but not before Wayne, for the first time, introduces the figure of H G Wells himself into the production, thanks to some nifty SFX supplied by Robert Kurtzman's Creature Corps.

‘Wells’s dark Victorian tale is really a metaphor for the expansionist British Empire of the time,’ says Wayne. Viewed from this perspective, ‘the Martians, with their vastly superior weaponry, are a colonising army that could easily be English. His story is more relevant than ever today; wars are still being fought over religion and territorial expansion, and his exploration of what we live and die for still speaks to audiences.’

While TWOTW evolves (into a film, game or theme park, CW hazards a guess) Wayne can finally get back to his next project, a musical based on Jack London’s The Call of the Wild. Long settled in Hertfordshire with his wife (with whom he has four children) Wayne shares his London cultural life with Culture Whisper.

When I used to live in London (I now live in Hertfordshire), the majority of my recording sessions were quite near Marylebone High Street. And when I started going out with Geraldine (now my wife), she would come with me to my early morning sessions and stay awhile – basically so we could have some time together. On those mornings, we’d always stop at Sagne’s patisserie [now Patisserie Valerie at Sagne London]. Sagne’s was then, and still is, on Marylebone High Street and opened early enough for us to get great coffee and usually a croissant or a fresh piece of pastry.

In my career, I’ve conducted at the Royal Albert Hall, in many of the world’s best arenas and played keyboards at smaller venues of different shapes and sizes. But until recently, I had never sat in the audience, much less performed at the Royal Festival Hall. But last March, as part of a bi-centenary celebration for Reed’s School, I was invited to be a guest conductor with their wonderful symphony orchestra, choir and band conducting two pieces of mine from The War of the Worlds. The room itself is beautiful, but the acoustics, quite wonderful, and when my ‘bit’ was over I made my way to an upper box to listen to a complete and superb performance of Carl Orff's Carmina Burana.

When I was composing The War of the Worlds, I lived close to Primrose Hill and would walk my Old English Sheepdog Ollie there every morning. He’d have a great runaround, and towards the end of the walk I would always stop and sit at the very top of hill – the view was (and still is) brilliant. In fact the Martians in H G Wells’s story come to their demise on Primrose Hill, so sitting on the top would help me envision what H G was describing and it definitely contributed to my musical score – specifically the sequence entitled ‘dead London’.

I can’t truthfully say I could pick the ‘greatest’ meal I’ve ever had in London, but as a special treat, I do love having breakfast at the Landmark Hotel on the Marylebone Road under its vast central atrium. Whatever you fancy it's pretty much there – they have a great buffet as well as a fixed menu and you can mix and match to taste. Sitting in the atrium with natural light pouring in gives a wonderful mood, and on occasions, the great and the good, or the not-so great and rather bad are seen as well, all adding to the meal itself.

Just around the corner from the Landmark is Lisson Grove, and a few hundred yards down is The Seashell. You’d be hard pushed to find better fish and chips anywhere in London, be it takeaway, or a sit-down meal. It’s been there for over 40 years and has been poshed-up in recent years, but it still serves fantastic food.

When I was growing up in London, I attended Haverstock Hill School in Chalk Farm, until I was 13. Virtually next door to the school was Marine Ices, which was established back in pre-World War II Britain. It was the creation of an Italian family that set up their ice cream and sorbet parlour and it was a regular port of call after school for myself and my mates. It now serves meals from its new premises, but what hasn’t changed are the delicious ice creams and sorbets that can still compete with the best in the world.

In 2006, as part of my debut UK arena tour, I conducted The War of the Worlds at the Royal Albert Hall. It was, of course my own work and show so very special to me. But it was more about knowing the history of the Albert Hall itself as well as knowing that some of the world’s finest artists had performed there. And there I was was, nudging ever so slightly in alongside them.

Ginger and White – a small cafe/restaurant on a side street in Hampstead. G&W offer wonderful coffees – they source their beans from a bespoke roastery, make their own peanut butter and jams, and are very child-friendly.

Definitely the corner of Ivor Place and Balcomb Street, NW1! I’ve only proposed once (to Geraldine), while we were living a street away. After about 18 months of ‘courting’, I decided one night to surprise her and propose. We were coming back from our nightly walk with Ollie, our sheepdog, and under a lamppost on the corner of those streets, I suddenly got down on my knees and popped the question. She was most surprised, stunned in fact – not only because she hadn’t been expecting me to propose – but also because Ollie was doing his ‘business’ on the next lamppost along! She still said yes.

When our daughters were small we lived in a lovely house on Linhope Street, NW1, which had no garden whatsoever. However, we lived just a few minutes walk to Regent's Park which offered wonderfully big areas to play and have picnics, a pond with peddle boats, and excellent playground facilities.

For us, the park became our back garden, and when I’m on my own, or Geraldine and I drive into London, we often try and take the route of the park's inner ring to reflect back to the time when our two little girls were playing, running carefree, or the picnics we’d have there with them.

The Shard is an amazing work of architecture and I've been to Hutong for dinner near the top. The food was excellent and the view breath-taking.

However St. Paul's gets my vote. It’s more than a cathedral, though if it was solely that, it would still be wonderful. It reaches the soul no matter what faith one follows. But you also get debates, special services, recitals, funerals and celebrations, and of course it’s located in a part of London filled with history.