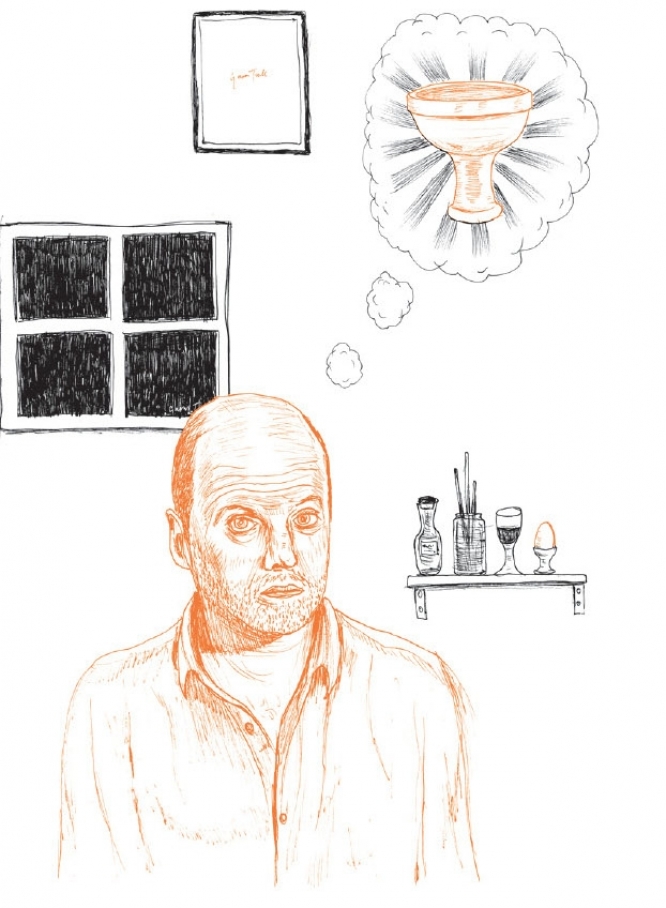 YBA Gavin Turk outraged the art establishment with his postgraduate exhibition at the Royal College of Art . Consisting of an empty whitewashed studio space with a blue plaque inscribed ‘Gavin Turk worked here, 1989-1991’, it was a piece of cheeky conceptual nose-thumbing which might not necessarily have inspired viewers with confidence about his future career.

Turk now has an international reputation

Twenty or so years later, Turk is an internationally respected artist with exhibitions all over the world under his belt and a reputation as the most intellectual of the YBAs, according, at least, to the Telegraph’s art critic.

And he has an imposing presence in the heart of London’s City in the shape of his 12-metre high public statue Nail, which buries itself into the pavement between One New Change and St Pauls’ Cathedral.

One of his more recent pieces is a white fabric-wrapped Vauxhall Ampera christened Mummy, an artwork created for the Vauxhall Art Car Boot Fair (catch it at its next stop in Folkestone on 30 August 2014 for a chance to pick up works by an impressive line up of contemporary artists in a chilled-out ‘car boot sale’ setting).

‘I’m fascinated by the way human invention has changed our urban environment,’ Turk tells CW. ‘As Mummy gets driven, it will pick up markers from its environment, effectively becoming camouflaged by mud and bird droppings while registering the maps and journeys it has been part of. It’s also a hybrid, so it’s almost completely silent. In fact I think I may have created an invisible car – it’s actually quite dangerous,’ he jokes.

The House of Fairy Tales

Also this summer, Turk’s House of Fairy Tales , conceived with his wife Deborah Curtis, will be at Wilderness Festival (7-10 August). This magical mystery tour in the guise of a children’s arts charity is a feast of lovingly conceived and created arts and crafts workshops and is well worth experiencing – keep an eye on the website for forthcoming London events.

This Is Not a Book About Gavin Turk

For all Turk’s conceptual gravitas, his willingness to explain and invite the viewer into his world is charming and contagious. That is the purpose of a volume of essays and drawings by friends of the artist created by Deborah and entitled ‘ This is Not a Book About Gavin Turk ’.

‘A lot of people see art at a distance,’ says Turk. ‘When they get up close to it they feel uninvolved, as if it’s an elite thing that has nothing to do with them.

‘We invited 30 artists and authors to contribute pieces about themes that come up in my work as an exercise in contextual studies. The hope is that we relate them to wider cultural themes that people are engaged by, so that they can feed those interests back into the art.’

Turk’s recently acquired beard and general aura of approachability give him a cuddly air, but that is belied by a taste in art which leans towards the obscure, challenging and bleak, as we discovered when he opened his cultural diary…

‘Vivian Maier was an American nanny who died in 2009 leaving a cache of 100,000 street photographs, some of which were discovered by chance in a job lot of negatives after her death. This documentary is about undiscovered talent – we assume that talent will always come to the top, that the underground will be exposed, but that’s not always the case. But it also about commercialism, and about creating a market around Maier.’

‘At 13 I wanted to be a comic book illustrator. I went to a show about 2000 AD at the ICA and got quite excited about it. It’s a gettable and accessible art form which has a huge influence culturally, but is hard to do well.'

‘My 13-year-old visited this after school at 3.30 and didn’t get back home until 8.30. He’d got completely lost in it, which is unheard of. I’m looking forward to visiting myself.’

‘I do quite enjoy reading slightly heavy books and there is a sculptural shape to Beckett’s work which I like, along with its repetitions and surreal quality. He has to be a little bit pedantic and belligerent, say the absurd stuff, do things you’re not supposed to do and break rules in order to expose the rules.’

‘I am taking my older son, who is 20, to this music festival on a former NATO military base in Iceland. It’s a lads’ trip, just the two of us. I’m hoping we’re going to be able to visit the Blue Lagoon .’ [This summer’s ATP line-up includes Portishead, Swans, Fuck Buttons and Mogwai].