With The Hard Problem, Tom Stoppard returns to the National Theatre after a 12-year absence for what will be artistic director Nicholas Hytner's final production 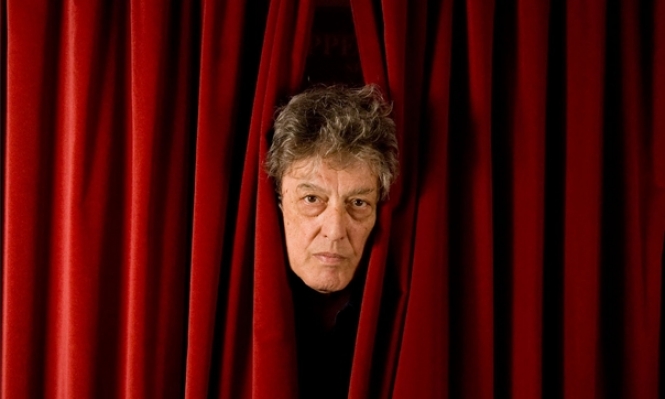 
Spied laughing along at the premiere of Great Britain at the National Theatre, Sir Tom Stoppard is undoubtedly getting ready for his own return to the venue. And much like the rehearsals of Richard Bean's tabloid satire, all aspects of Stoppard’s latest offering are cloaked in mystery.
The play will premiere in the newly renovated and renamed Dorfman Theatre, opening September 2014. With no title, theme or cast announced, all we know is that this exciting announcement follows years of Hytner "nagging" the playwright to produce during his reign National. That this will be the final show that Hytner will direct just adds to the poetic justice.
Theatre rumours...
Rumours abound that the play will concern science and history — an exploration of historical academics not unlike Stoppard's masterwork Arcadia. His stock characters tend to be geniuses, either in the form of teachers and musicians (Every Good Boy Deserves Favour, Rock’n’Roll) or tortured writers (Shakespeare in Love, The Invention of Love).
What Stoppard criticism says...
Despite being hailed as an ‘intellectual’ entertainer who evokes accurate dramatic worlds thanks to diligent research, Stoppard sees in terms of humanity rather than creative complexity. In an interview with The Paris Review , he discussed the research process behind his work: “ I don’t think of it as research. I read for interest and enjoyment, and when I cease to enjoy it I stop. I didn’t research quantum mechanics but I was fascinated by the mystery that lies in the foundation of the observable world... I thought it was a good metaphor for human personality .”
Tom Stoppard's Personal Life & Influences
The 77-year-old playwright has become extensively involved in human rights issues and such political preoccupations reflect his own family heritage. All four of Stoppard's Jewish grandparents were killed at Auschwitz concentration camp, along with many family members from his Czechoslovakian homeland.
But along with this deeply personal influence there is also a sense of broadening focus. Recent years have seen the playwright branch out into film and radio, with the blockbuster film adaptation of Anna Karenina (starring Keira Knightly) and radio drama Darkside, which explore his favourite band Pink Floyd. Indeed his current project, a stage adaptation of the Oscar-winning film and liteterary romance Shakespeare in Love, has just opened on the West End. Not since 2006, with Rock 'n' Roll at the Royal Court, has an original Stoppard play graced the stage. Starring in the acclaimed production, and in the premiere run of Arcadia before that, was Rufus Sewell. Considering this affinity between actor and playwright we wouldn't be surprised if Sewell made an appearance in this as yet untitled production.
The difficulty of writing
Just last year Stoppard hinted at the difficulty of writing this latest play, as he bemoaned to the BBC: "I can't just put things aside for a day and come back. My brain just isn't good enough anymore... So I'm clearing the desk and planning to work without interruption."
We will have to wait until January 2015 to see the fruits of this labour. One thing's certain, this untitled play will be the among next year's most momentous theatrical event -- and we will keep you up to date and in the know. To receive booking reminders and notifications about when tickets are released, become a member of Culture Whisper today from just £7 per month.