The most exciting creative collaborations of 2014

In line with a recent trend of big brand collaborations with major artists, we round up the most interesting and offbeat joint creative projects 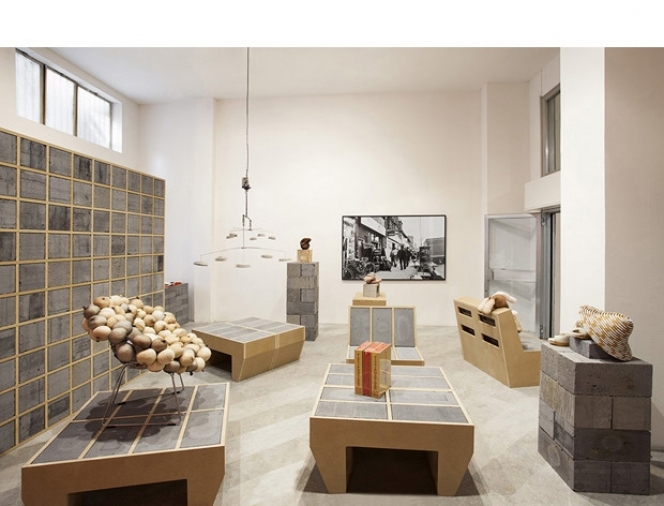 With Alexander Wang’s collection for H&M set to be released in November and Joseph Altuzarra designing for Target, 2014 has been a big year for artistic collaborations. But contrary to the trend of celebrity-driven endorsement ventures with high-end designers that seem to dominate the mainstream media, these collaborations are far from confined to the fashion industry. In line with an exciting recent movement of big brands collaborating with major artists, Flora Hughes-Onslow rounds up the more interesting and offbeat joint creative projects of the year, and highlights those still to look forward to...

While perhaps not the first name to spring to mind when commissioning a designer for a new furniture collection, Sarah Lucas’s debut range for Sadie Coles gallery in London took the design world by storm when launched in Milan earlier this year. In collaboration with the London Art Workshop, the artist with a famously cheeky sense of humour (see 1997’s Chicken Knickers ) created a limited edition range including tables, chairs, and benches, all constructed from concrete breeze blocks embedded into MDF frames. The stark contrast of the textures was not only surprisingly aesthetically-pleasing, but also parodied modern living in characteristically playful Lucas style – all in all, a design collaboration dream.

The upcoming collaboration between Alexandra Llewellyn Designs and fine artist Miranda Donovan is also an unlikely one, but wholly intriguing. Having already collaborated with the likes of Alice Temperley, Alexandra, one of the world’s leading backgammon board designers, approached Miranda, a purveyor of raw street art, with the idea of a project that would merge luxury with decay. The end result – a backgammon board masterfully constructed from semi-precious stone, mother of pearl and sycamore, all contrasted with Donovan’s signature rough surface – will be on display as of this July at The Clerkenwell Collection, alongside several more of Donovan’s inspiring artworks.

Drawn to the Real

Bringing together five contemporary artists (Miriam de Burca, Jane Dixon, Richard Forster, Marie Harnett and Emma Stibbon) through the medium of drawing, Drawn to the Real at the Alan Cristea Gallery is a impressive celebration of an intricate art form. For all the artists involved, drawing is central to their practice, rather than simply being a preparatory study, and the series of works exhibited will explore the artists’ interest in issues of documentation, representation, scale and the artistic process. Featuring delicate and detailed miniature pieces alongside large-scale drawings, this small summer exhibition is a veritable demonstration of, and tribute to, their collective artistic talent.

The artistic and fashion world await Mary Katrantzou’s debut collection for Adidas with baited breath. The young Greek fashion designer’s distinct and eye-popping prints, colours and bold silhouettes will grace a range of Adidas sportswear this November, and are expected to transform the brand’s products to an unprecedented degree.

Alexa Chung’s design dreams seem to have at last come true with the announcement of her first creative collaboration, launching in January 2015, for U.S. brand Adriano Goldschmeid. The latest in a long line of partnerships in the lucrative life of the young model, Chung is finally putting pen to paper and making the foray into the design process. Set to consist of denim dresses, T-shirts and jeans,her new range for the American label apparently references the likes of Jane Birkin and the Sex Pistols and will be shipped internationally, as well as potentially being stocked in Selfridges and Net-A-Porter.com.

In a bizarre bid to avert the possibility of slipping into obscurity, WikiLeaks founder Julian Assange is to take to the catwalk this September, making his modelling debut in Ben Westwood’s (Dame Vivienne's eldest son) forthcoming show. Conveniently, the event will be held in his current secure Ecuadorean Embassy residence; this may not be the pre-eminent fashion museum in London, but it'll avoid any risk to his liberty, with guests reportedly include George Clooney and his high-flying lawyer fiancée, Amal Alamuddin – who has acted as part of Assange’s defence team. Apparently keen to highlight Assange’s plight, Westwood will be dressing the Australian whistleblower in clothes inspired by Clint Eastwood, as well as garments featuring a 'Julian Assange print'.

With 2014 marking the 50th anniversary of Marianne Faithfull’s remarkable career, the '60s legend is showing no signs of slowing in terms of creativity, imminently releasing a brand new album titled Give My Love To London . Featuring songwriting contributions from the prodigious Nick Cave, this new artistic union between two of the music industry's greatest talents is exciting to say the least.

Following in the footsteps of Christopher Kane and Proenza Schouler, fashion prodigy Simone Rocha has been snapped up by Californian denim brand J Brand as her fledgling label has become the one to watch after winning the Emerging Designer Award at the British Fashion Awards in 2013. Launching to press July 2014, the range will only be available to buy at the end of the year but we have high hopes for Rocha’s creative and collaborative vision.

Are you a fan of green-minded fashion exhibitions? Adding another string to her already highly-accomplished bow, supermodel, actress, and environmentalist Lily Cole has just launched her first footwear collection with French ecological shoe and accessory brand Veja. Continuing in her campaign on behalf of Sky Rainforest Rescue (a partnership between Sky and WWF to help protect one billion trees in Brazil), Cole’s new shoe collection uses wild Amazonian rubber on the soles of the trainers to raise awareness of the versatility of the naturally occurring material. The Amazon is the only place on earth where rubber trees grow in the wild and their sap can actually be extracted without damaging or cutting down the trees. And inspired by her trip to the Amazon in 2012, Lily’s designs hope to raise awareness of this alternative resource while still tapping into key SS14 trends.

The creative melting pot that is & Other Stories has been a champion of unusual artistic talent since its inception in early 2013. Having already launched a creative project with fashion blogger Susanna Lau (AKA Susie Bubble), the store has also recently joined forces with Moscow-based designer Vika Gazinskaya. Releasing a Co-Lab collection of ready-to-wear, shoes, and accessories, the designs – full of Vika’s signature vibrant crayon prints, patterns and sketches, all adorning artistic tailored items – encapsulate a whimsical warm-weather charm. We recommend you watch this contemporary artwork/fashion space for more promising collaborations from & Other Stories.