Ahead of the trends: Royal Ascot hat etiquette

Millinery is having a moment and traditional hats have made a comeback. Lucy Brooks explores the hat etiquette and trends for Ascot 2015 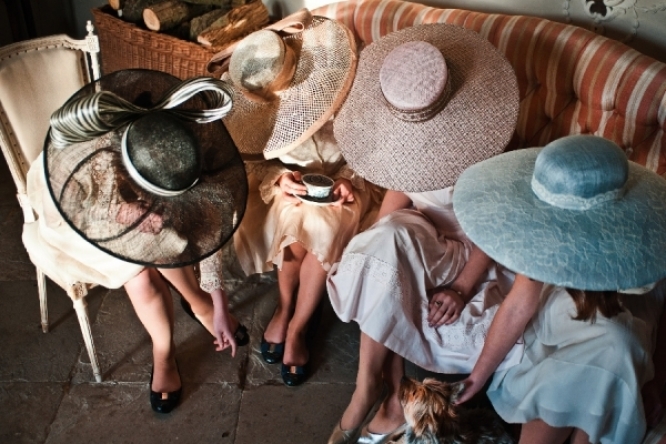 Hats by Laura Cathcart
Millinery is having a moment. Quintessentially British and reminiscent of bygone glamour, traditional hats have made a comeback. The interest in headpieces has expanded from the upper echelons of society to become a global trend “since the Duke and Duchess of Cambridge’s wedding in 2011, and since... the younger royals wear hats so frequently,” Milliner Gina Foster told The Financial Times.
Reflecting this demand there’s a whole new generation of high fashion milliners, including Harvy Santos, Laura Cathcart and Tour de Force, all transforming headpieces from mother of the bride to fashion forward.

As an institution that’s too posh for the final vowel (snobbery dictates that one attends Asck’t, never Ascot), the historic race is the smartest sporting event in the English calendar, and a sartorial showcase of the best, and worst in head-turning headwear.

Ascot style rules
The quest to find a suitable hat for Royal Ascot is very much a numbers game. Following an amendment to the rules in 2012, ladies in the Royal Enclosure (the most exclusive spot from which to enjoy the race) must wear a hat or “a headpiece which has a base of 4 inches or more in diameter is acceptable as an alternative” but “fascinators are not permitted ”. Enforcing these rules was “a specially trained team of dress code assistants”, in other words: The Fashion Police.

The specificity of these stipulations is supposed to keep things formal: no doubt it’s also a way of avoiding the W.A.G aesthetic of Aintree (the big racing event of the North) where lurid lycra and indecent minis are made race-worthy with a few feathers in the hair. At Ascot the look is a little different, and a lot about headwear. Those in the Royal Enclosure are rubbing shoulders (and bumping hat brims) with the Her Royal Highness herself. It’s not just headwear that faces rigorous scrutiny: dresses must be no shorter than an inch above the knee, straps at least an inch wide.

The headwear, however, is harder to define. What makes a hat officially a hat?
Obviously, something that covers your head. Yet the line between an acceptable headpiece and a taboo fascinator is blurred. The latter is more of an elaborate hair accessory clipped on the side of the head. Yet, with the minimum diameter leaving plenty room for interpretation, the official definition denotes that a hat must cover the crown. A fascinator is anything smaller that the mandatory four inches.

Ascot hat style 2015
Millinery is much mythologised. According to Stephen Jones, creator of iconic headwear and curator of the V&A’s ‘Hats, an anthology’, “if a woman wears a hat… she always has the door held open for her”. Having enjoyed no such chivalry in my winter beanie, I can attest this refers to a very specific kind of hat.

There’s a broad spectrum of Ascot-suitable headwear, from the notorious Phillip Treacy creations donned by Princesses Beatrice and Eugenie and the Middleton sister Satellite dish to the bold broad-brimmed Andie MacDowell or even the famous Marlene Dietrich top hat. Trends vary. High Society Milliner Laura Cathcart gave me a heads up on this season’s trend for a Duchess of Cambridge style “smaller pillbox type hat that Jackie Kennedy first made famous in the fifties…I've made quite a few for Royal Ascot”.

How to choose a hat for Ascot 2015
Beware: for all their drama and fun, hats are a minefield – and the tribal snobbery that surrounds the Royal Enclosure fuels an annual deluge of fashion faux pas articles. Common sense only gets you so far. Vivien Sheriff, milliner to the Royals, told The Lady that a "hat should flatter your face and your silhouette", but also show "daring", all while worn "proudly on the top of your head" (never at the back). Those seeking a sophisticated edge should "angle it with a slight dip over your right eyebrow". While opportunity for a fun fashion statement is part of Ascot’s charm, rein in the humour: novelty is a no-no. If your hat resembles something other than a hat (food item, woodland creature, national monument, human anatomy) then it’s time to rethink. If in doubt, look to the Queen. She never gets it wrong.

Ascot etiquette tips
So, you’ve found the hat. Don’t feel too smug. Actually wearing it brings yet more rules to get your head around.
First, adjust your gait. Rushing, sudden movements (or the slightest breeze) could send your crowning glory flying onto the racetrack faster than the odds-on-favourite equine. The golden rule of ladies’ headwear is that it must stay on the head. According to Downton Abbey writer and expert on the aristocracy Julian Fellowes, the only time an English lady may remove her hat is in the bedroom.

Next, prepare for social interaction. "It is notoriously difficult to socially kiss while wearing a wide-brimmed hat "concedes high society bible Debretts.“There is a knack to tilting the head at a suitable angle, but two ladies both in wide brimmed hats should avoid such an 'intimate' greeting”. Duly noted. Though Laura Cathcart, adds that if wearing a more modestly sized pillbox style, kissing is "both acceptable and considerably easier".

All that’s left now is to enjoy the races, and be secretly thankful that the theatrical art of doffing one’s hat in elegant greeting one’s hat is strictly a gentleman’s domain.