Nose to the grindstone? Look up. From Parliament Hill in the North to the boat trip to Greenwich in the South, here are the best views of London 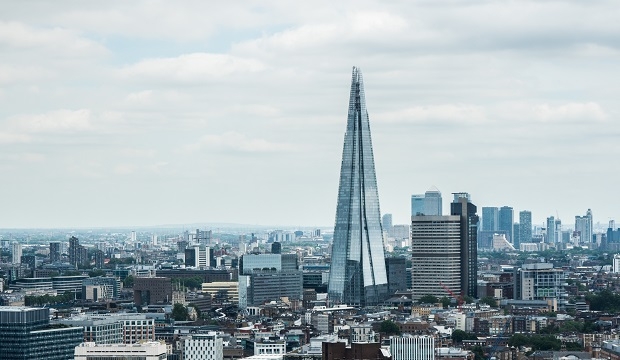 The lowdown on living the high life: which is the best view in London?
Looking for the best view London has to offer? We are so intent on visiting, commuting and rushing from appointment to drinks to appointment that we don't often step back for a London panorama.

If your world view is pressed up in someone's armpit on a tube, pushed up against a bar in the evening or hemmed in another crammed exhibition then give yourself some room for speculation with our guide to London's best views.

When you do, you can frame the hectic, huge city all at once. Couched in parkland, softened by the Thames or washed down with a cocktail, these views of London are guaranteed to make you fall in love with it again. Our picks all come at less than the cost of a cocktail. Drink them in. 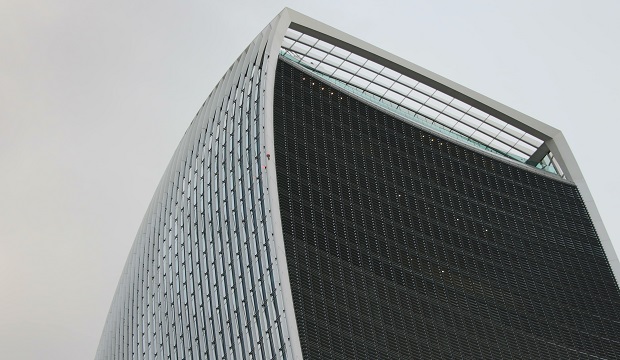 Why go to the Shard when there's a better building nearby that offers a similar view for free, and one that includes the impressive Shard itself in its vista? The Walkie-Talkie building, official name 20 Fenchurch Street, was awarded the Carbuncle Cup for the worst new building in the UK. Being large and prominent, the best way to avoid seeing it is by looking out from it. Better news, it makes up for its controversial appearance with a roster of perks- as well as a viewing platform and open air terrace, there's a garden, a restaurant and... rooftop yoga. 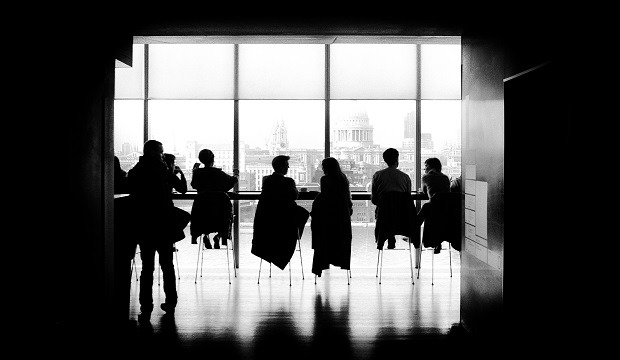 Best for: river views over to St Paul's
Cost: Free
Knee-tremble factor: not bad, and there's fuel for those feeling weak from cultural saturation at the restaurant

The newly-renovated Tate Modern might have shifted its galleries around, but they're still arranged around a great view North across the river to St Pauls and the growing skyline around it. If you want an excuse to stay longer, the restaurant here, Switch House, is another highlight. 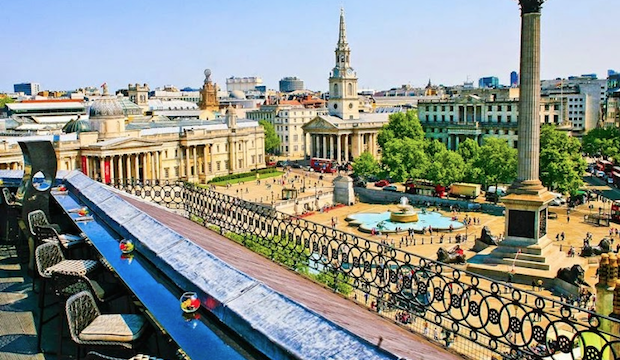 Best for: delicious refreshment
Cost: a cocktail and £5 entrance
Knee-tremble factor: not too high, and an Aperol spritz will stop the wobble

If you've ever wondered what Lord Nelson gets to look at all the time, the amazingly central view of London from the Vista bar right on Trafalgar Square isn't far off. You can see London from all sides and notice how densely packed its landmarks are radiating out from Trafalgar Square: spot Horse Guards Parade and the Royal Opera House either side of you. Come in the evening dressed up for a drink and take a pitcher, it will last longer- the sharing cocktail jugs make excellent party starters. 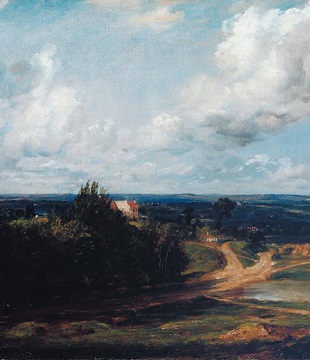 Best for: kite flying and picnicking
Cost: Free
Knee-tremble factor: exercise those quads- it's a sharp climb up

A short, steep climb takes you a surprising way above the city. The actual summit of the hill is 98 metres high. There are kite flyers, embarrassed lovers, quiet benches and shady spots. Legend has it, this was where Guy Fawkes planned to watch the destruction of parliament before he was famously caught. Looking South you can see central London, including the Gherkin and St Paul's, thankfully none of it touched by Fawkes' bonfire night schemes. Painters through the ages have loved this view, including Constable (left).

Unlikely rumour has it that from this steep knoll in Richmond, Henry VIII watched for the signal from the Tower of London that Anne Boleyn, his second wife, had been executed. Despite its grisly past, there's something very reassuring about knowing that the view from Richmond Park to St Paul's is protected and will never be changed. As long as St Paul's has stood, you've been able to peek out at it from this corner of Richmond park, where it appears suspended in a little cameo through the telescope- and so it shall always be. 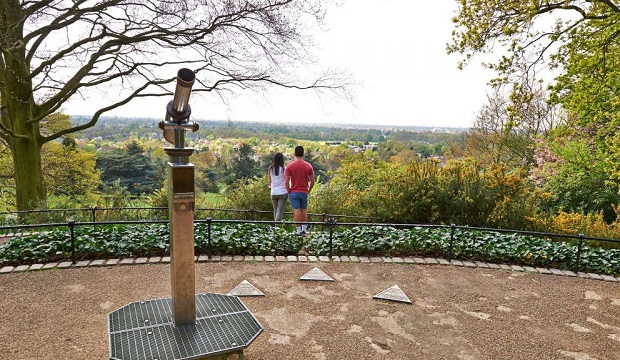 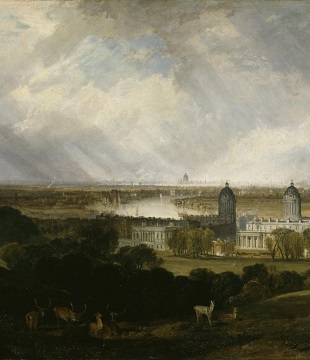 They do things differently in Greenwich. It's got a village feel, the newsagents has funny local adverts and all the shop staff are friendly. The 18th century buildings, the Royal Maritime Museum, Observatory and Old Royal Navy College, spaced out at leisure over the wider area of South East London, give the eye sweeping vistas to take in, none more pleasing than the view from the top of Greenwich Park marking a contrast between Canary Wharf in the distance and London's maritime past in the foreground. Maritime and landscape artist Turner painted the view on the left. 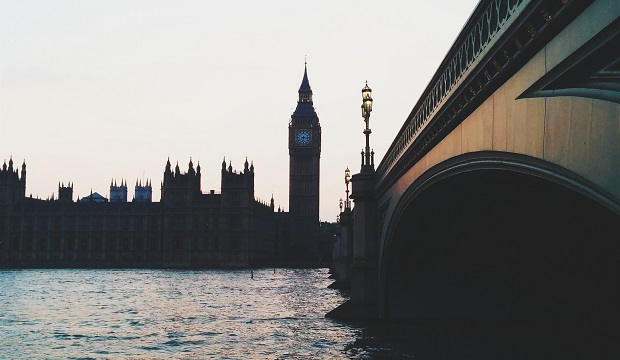 Best for: a rolling view from Westminster to Greenwich
Cost: £12.50 one way
Knee-tremble factor: sit down, you're rocking the boat

For a view that changes along the river, and one that isn't usually seen on your average walk, see the city from sea level and let London unfold from West to East. Highlights from the river are: Westminster, the Globe Theatre, the Tate Modern, the Golden Hind, Tower Bridge, and passing ducks. 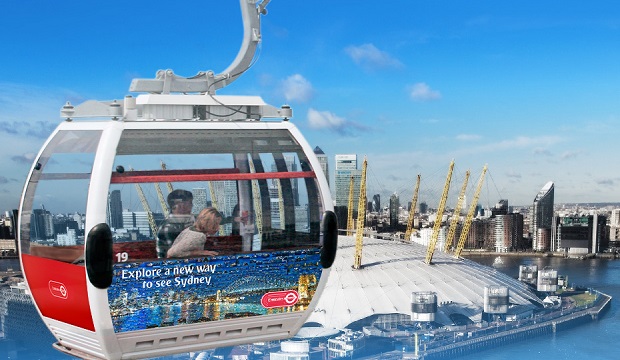 Best for: a moving view from Greenwich to the Royal Docks
Cost: £3.50 with an Oyster card
Knee-tremble factor: rather wobbly, but it's only ten minutes across

East London is a district that is fast-changing. From the O2 dome to the Olympic Park to the docks, this region is constantly evolving under your eyes and the fast-moving cable car is the right way to cross it, even if you do go slightly weak at the knees for entirely non-romantic reasons. It's the only cable car in London and being suspended in it across flat far-below docklands and the smooth rise of the O2 arena is just as fun as the London Eye (and more purposeful than going around in circles) for a fraction of the price.