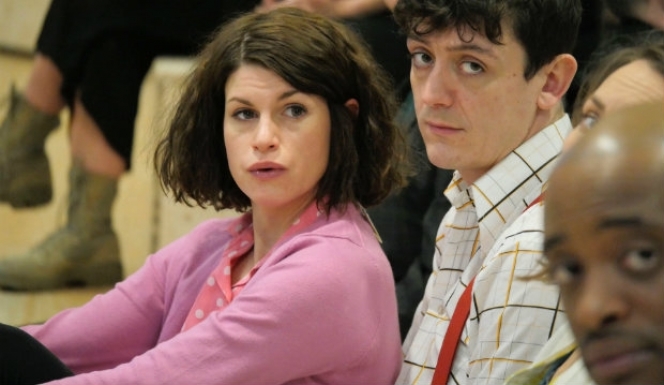 The magic, music and romance make AMSND one of the bard's best known and most beloved plays. Even if you've managed to miss the regular stagings, you'll most likely be familiar with the couple-switching meta-theatrical triple-wedding narrative arc. As ever with Shakespeare, there's scope for re-interpretation and adaption, but the essential elements and tone prevail.

Enter director Joe Hill-Gibbins. He returns to the Young Vic and after a pacy, audacious mildly pornographic take on Measure for Measure with a drastically different production of A Midsummer Night's Dream, which promises to takes us into the the dark subconscious of the play. It comes to the Young Vic this February. We caught up with actor Jemima Rooper to discuss the rehearsal process -- and find out what to expect from the production.

'I don’t think the actors even know yet,' she tells us. 'I don’t think he and the creative team have decided what they want yet,'

We speak when the cast are halfway through rehearsal process. Rooper plays Hermia, as part of an impressive cast that includes John Dagleish as Lysander, Anna Madeley as Helena and Olivier Alvin-Wilson as Demetrius. Instead of simply learning Shakespeare's script the actors are working alongside the director and designer Johannes Schütz to devise a new version of the play.

The whole creative process is a departure from the norm. 'We didn't do a read through,' Rooper explains. Instead the cast were 'crawling on hands and knees' right from the offset.

Since last working with Joe Hill-Gibbins in 2007's adaptation of Brecht's A Respectable Wedding at the Young Vic, Rooper has become a familiar face. She's interspersed stage roles in Blithe Spirit, Hand to God and One Man, Two Guvnors with regular stints in television hits Atlantis, Lost in Austen and As If .

But nothing quite compares to this collaborative way of working. 'Joe uses a lot of different methods for us to explore,' she tells us, listing daily fitness drills along with movement workshops and character studies. 'Everyone brings something that is intrinsically themselves and it's very much a company'.

Guiding the creation process is a sense that this is 'a darker interpretation of the play' instead of the irreverent fairy story.

'The magic is definitely still there (some of the exercises we’ve been doing have been hypnotic and surreal). There's an energy through it that creates a space where that sort of celestial, supernatural atmosphere is believable'.

There are some edits, but Shakespeare's verse will be largely unaltered, so the shift comes in aesthetics and tone: 'we’re relying on the language and each other,' Rooper tells us.

'There's room for music and dance, but this A Midsummer Night's Dream going to be much more subversive: less of a dream, more of a nightmare.'

The shift from farce towards grittier drama is inherent in the casting. 'Traditionally the lovers are younger - very innocent and earnest,' Rooper tells us. In this production they are played by thirty-somethings who have the 'sex farce' into 'something more complex and relatable'.

We ask how the character of Hermia, the beautiful young Athenian who risks death or being disowned by running away to marry the man she loves, can fit into this more contemporary vision of the narrative.

'I have no idea!' Rooper is exhilarated rather than disheartened by the challenge: 'so much of the play to do with Elizabethan life, so how we can make what’s there in the text work with our more modern perspective on relationships?'

It's the question dominating the devising process and, Rooper explains, the actors have been focusing on how 'the characters have a complicated physical history with each other … it muddies what is written in the text, which is quite innocent'.

For all the uncertainty about the specifics of the production, she is unwavering in her commitment to making it feel new. 'I feel that with any classic play it has to have a new perspective. I would not have considered doing the job unless there was a hook. Joe was the hook and it's a leap of faith from everyone involved'.

The result, at midway through the rehearsal process, fills Rooper with feelings ranging from 'freedom' and 'excitement' to 'nerves' and 'paranoia'.

But, this element of the unknown is, to her, 'theatre in its prime, its purest form, its true definition'. It is also the speciality of the Young Vic, which where canonical classics are rendered remarkably fresh.

You don’t want to be doing a play that’s just a gimmick. It doesn’t feel like that.'

Yet, she is already sure, it will ruffle some feathers: 'Traditionalists will loathe it…There’s no point in doing it otherwise'

A Midsummer Night's Dream is at the Young Vic from 16 February. Click here for more information.