The Night Tube Jubilee line runs to Greenwich from this Friday. Here's 7 things to do in the area 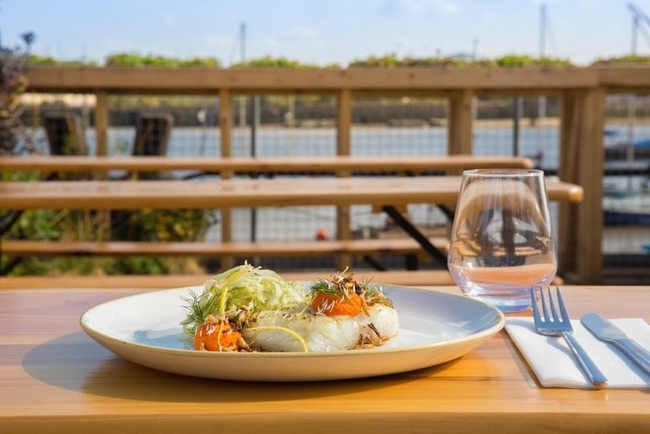 Farmopolis Cafe, Greenwich
The Jubilee line will join the ranks of the Central and Victoria lines this Friday by opening all night.

To celebrate the London Night Tube Jubilee Line opening we're profiling Greenwich, where bars and restaurants scrabble to outdo Greenwich's famous line of longitude (Greenwich Mean Time) by being the most talked-about things to do in Greenwich.
Farmopolis Café

London's most wholesome new opening 2016, Farmopolis gave fresh perspective to plants from the Chelsea Flower Show this year. The floating foodie hub is now home to the festival's horticultural veterans. Besides a simple and seasonal cafe, the jetty also houses regular talks and puts on London cultural events which softly promote honest urban regeneration. And heart-melting schemes are at the centre of what the Peninsula does. 'Adopt a plant', anyone? The cafe itself will take as much as they can from the re-housed herbaceous plants (and veg patches) on the jetty to put on the plate.

Why go: This type of urban regeneration project rarely gets this big.

Celebrated London chef Stevie Parle opened Craft London in 2015 to celebrate the diversity in British food. He farms bees on the roof and roasts coffee downstairs for his dishes, which are unique interpretations of classics, largely cooked over flames from a semi-open kitchen. But the main pull is the 360 degree views over the Thames and the design by Tom Dixon, the celebrated interior designer.

Why go past dark: There's an elegant cocktail bar on the upper floor with unique views, and innovative cocktails.

This big, flashy hotel has had everything thrown at it. There's a relaxed restaurant, a formal restaurant and a sky bar with good views which is open late and available to outsiders and guests. Traditionally with big hotels like this, the food and drinks are twists on classics, and they're served in elegant Deco-inspired settings. These won't be the tightest dishes, nor the most innovative new mixes, but the unique views are worth the trip.

Why go past dark: The sky-high bar is a good vantage point for classic cocktails done well.

The phonomenon has reached Greenwich. Steamy bowls of comfort from Vietnam have relocated to quaint Greenwich Village, where during the daytime shoppers can take respite from the market by popping in for a bowl. After dark, there's little that'll help soothe the day than pho, a spiritual food for east Londoners on the Kingsland Road (otherwise known as the 'Pho Mile'). At Pho Street, which has received very good reviews, recipes are sourced from old family ones, and the ingredients are sourced daily.

Why go: To switch-up on the traditional pub fare available ten-a-penny in the area.

When in traditionally British maritime Greenwich, why not act like the French? This Champagne and charcuterie bar certainly agree - they opened recently in area and pair the bubbly stuff with wonderful small plates and nibbles. Don't despair if staying (relatively) local is on your foodie agenda: British sparkling wine is also served here. Just don't call it Champagne.

Why go: There's a range of 50 French cheeses to pair with the sups.
Indig02

The 02's smaller, more niche younger sibling is the Indig02. Be warned: you aren't necessarily going to know many of the artists playing here. The acts tend to harness unique fan bases, but should your thing be booked (commercial acts like Jimmy Carr are scheduled for 2017 so keep an eye on the website) this is a unique and well-capable space with good sound for late night gigs.

This industrial-sized bowling alley isn't intimate like its smaller rivals, All Star Lanes, but its roster of all-star live gigs feature throwback artists that can make for a novel night out. But go at a popular time (Wednesday to Saturday evening) otherwise this super-sized bowling mecca can feel empty. On the converse, go with a good group at the weekend and it feels more Times Square than east London.

Why go: Big groups at the weekend suit this space well. It's pricey enough so that party-goers are generally sensible, and the decent rock 'n' roll playlist is a ticket to nostaglic heaven.