The best waterside dining in London 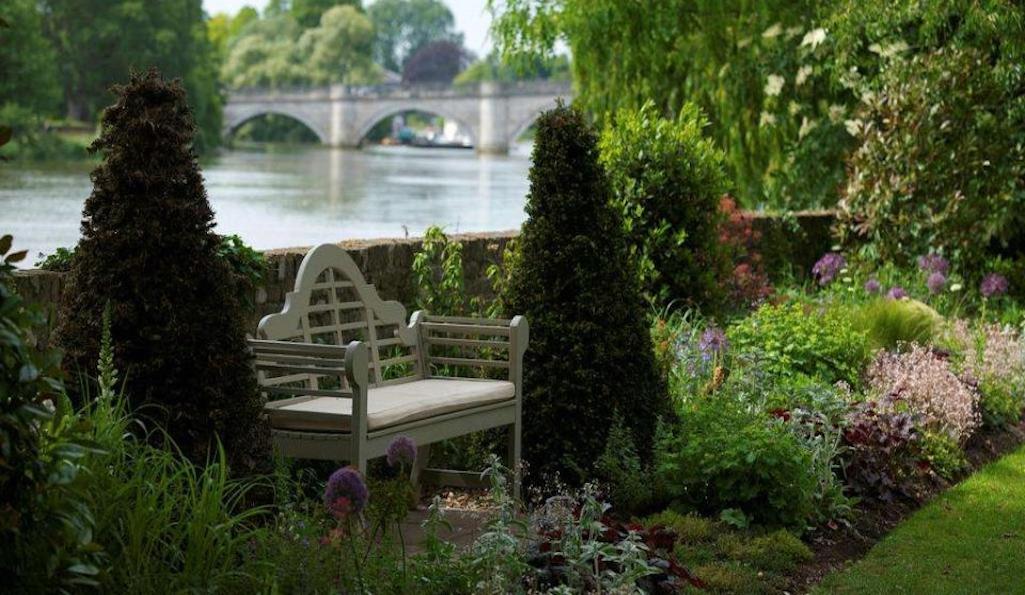 The glorious garden at Bingham Riverside, Richmond
Waterside dining keeps getting better. Canalside eating now offers almost as many gorgeous locations as Thameside. Yet some of the best remain hidden gems. Bingham Riverside has gardens to rhapsodise about (and a literary past). While at Bistro Vadouvan, you can explore classical French meets Indian and Middle Eastern spicing. Later this summer, Sam's Riverside will provide dining besides the newly renovated Riverside Studios arts centre.

Meanwhile, at Battersea Reach, Megan's Brasserie (dog-friendly dining) joins restaurants including Francesco Mazzei at Fiume, Vivek Singh at Cinnamon Kitchen and oyster specialists The Wright Brothers in owning more of a buzz. The arrival of Real Food's River Walk Market, a new weekly independent market at the foot of the iconic Battersea Power Station, adds further allure to its foodie credentials. River Walk Market will be host to independent food and drink producers, artists, designers, street food and live musicians every Saturday. The restaurants at Coal Drops Yard on Regent's Canal at King's Cross: Hicce, Barrafina, The Drop Wine Bar, Casa Pastor should come into their own this summer, too. 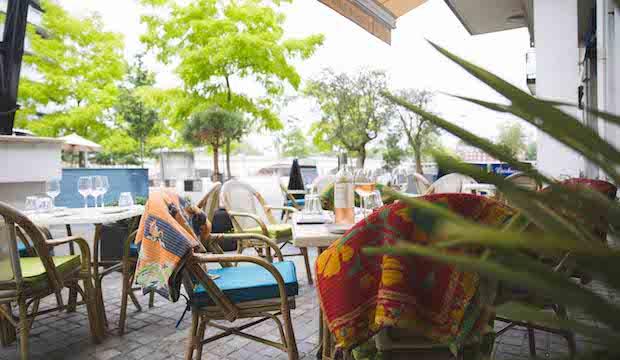 Bistro Vadouvan has the gentle laid-back charm, and, as they charmingly describe it, 'French and spice' mix of Pondicherry, the former French area from which chef-patron Durga Mistra takes much inspiration. The restaurant menu reflects his own journey from Chennai, taking on French classical cuisine working with Éric Chavot, to his present home: a spacious, airy restaurant on Putney Wharf with a prime riverside terrace and plenty of seating. It will be a blissful place to dine come high summer. Mistra's eclectic culinary travels come together as a thoughtfully nuanced, sometimes daring, menu that is highly accomplished. House flatbread with pistachio labneh makes a welcome snack, sea bream ceviche with the spicing turned up a notch has an exhilarating kick. Exemplary barbequed Iberico pork is accompanied by charred cabbage. Desserts are stunning: saffron and cardamom pear looks as elegant as it tastes. 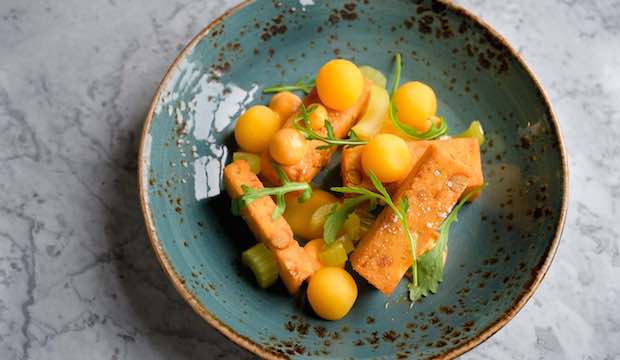 Head west to Richmond for one of the best and most discreet waterside spots in London at the idyllic Bingham Riverhouse. The restaurant/hotel has just been fashionably renovated in sophisticated boudoir colours. Expect a high-end food experience to match the view of serene gardens and the Thames at its majestic best. The cocktail bar is one of the capital's loveliest, especially when it is warm enough to enjoy the terrace. The listed Georgian building has an interesting literary past. Former tenants were an aunt and niece who were lovers, wrote under a male pseudonym and held exclusive literary salons with the likes of W.B. Yeats. It remains an exclusive yet accessible gem for romantic or family dinners with great service and a quirky wine list too. 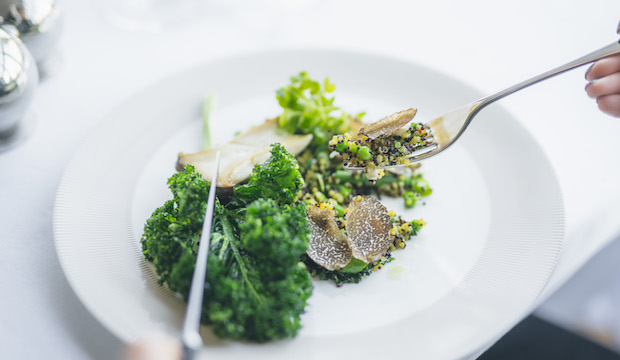 Positioned inside the Royal Festival Hall, with views onto the Thames and the Southbank below, swish Skylon has had a culinary makeover courtesy of Helena Puolakka (who also looks after Aster restaurant in Victoria). The kitchen's forte remains uncomplicated, serving dishes cooked with real verve. The new menu includes slow-cooked Chichester wood pigeon with beetroot creme fraiche, chestnuts and kale, besides sharing dishes such as Highland venison wellington with braised red cabbage and Chateaubriand with slow cooked endive, Roscoff onions, sage with maderia sauce for two.

Simpler lunch options include Dorset crab roll with crispy celery apple salad and Marie Rose sauce. There's a great burnt lemon meringue tart, too. It's a great spot for pre-theatre or something a little more leisurely. The décor has been updated to bring a more laid-back feel to the space, whilst continuing to boast the spectacular views over the River Thames through floor-to-ceiling windows. Skylon remains a stylish performer. 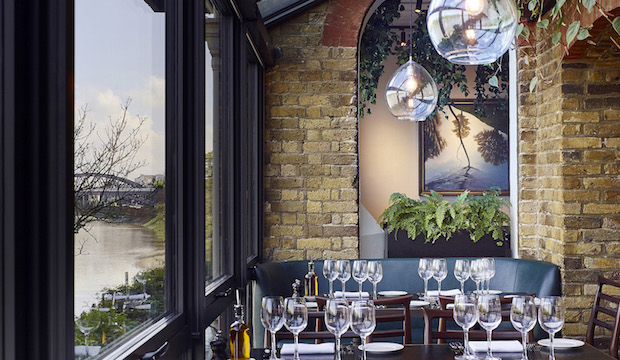 On a tranquil stretch of the Thames close to Barnes Village, Rick Stein's London restaurant has a huge conservatory. It's a special yet known outpost, ideal when arranging a sophisticated dinner date for seafood lovers or a family get together Sunday lunch. For those who relish fully and messily engaging with their dinner, the Singapore chilli crab (bibs provided) is extremely tasty with a good punch of heat. There are classic fish grills: Dover sole taken off the bone at the table always impresses, and excellent (if pricey) fish and chips plus favourite summer desserts such as a spectacular pavlova.
Where: Tideway Yd, 125 Mortlake Road, SW14 85N
For more details and to book
The River Café 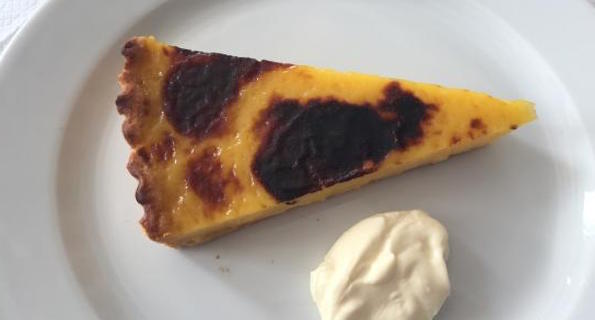 Age has not withered the infinite attractions of the River Café which was spreading the gospel of seasonality and respect for considerately produced ingredients far and wide, long before many of today's chefs were even at school. The dizzying prices do reflect the unsurpassable quality of the ingredient-driven Italian food, even if it makes eating here a true once-in-a-lifetime experience for most of us.

Really everything on the menu is superlative. On a balmy summer day, dine on poached langoustines with aïoli and fresh pea salad followed by clam risotto dressed with zucchini flowers, lobster risotto or char-grilled calamari with rocket. If Amalfi lemon tart is on the menu, there is no contest; though the chocolate nemesis is mesmerisingly good. Save up and go just once, if you can.

Friendly and engaging service, often by the cream of resting thespians, and stunning Italian wines served in beautiful glasses all add to the treat that makes The River Café still the ultimate waterside dining spot in London. 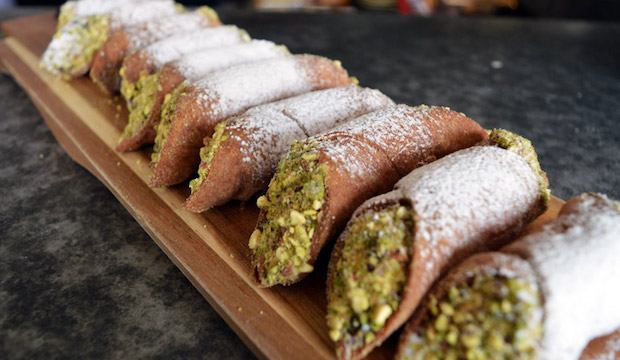 ‘Gotto’ translates from Veronese dialect to mean ‘grabbing a bite to eat and a glass of vino with friends’, which is exactly the laid-back vibe at this modern trattoria in up-and-coming Here East on the River Lea. It is the new development in the former Olympic press centre alongside a number of waterside eateries and bars. Locals can cycle here along the towpath, take a stroll through Elizabeth Park from Westfield Stratford, or cross the bridge from Hackney Wick.

Start out lounging on the sun-trap terrace with a house-made vermouth or craft beer and snacks – such as salty cubes of pork and pancetta with a creamy cacio e pepe sauce. There's also good homemade pasta and whole seabass with a zingy Sicilian caponata. Divine desserts include roast hazelnut bignè (choux buns filled with gloriously nutty cream) and proper cannoli. 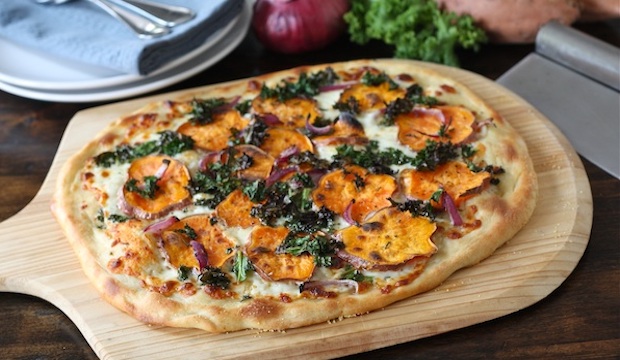 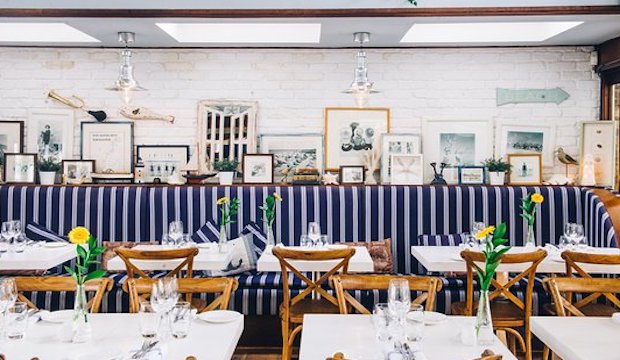 Dreamily located by the banks of Little Venice, don’t be fooled by the seasonal moniker: this Summerhouse is open right through the year. It offers canal-side dining 'with a Cape Cod influence' and sunny echoes of a Long Island beach retreat in the menu highlighting New England clam chowder and popcorn shrimps, besides Canadian lobster and fish and chips. There's also a good dessert list.
The Summerhouse even has its own moorings, for those who fancy turning up by boat.
Where: 60 Blomfield Road, Little Venice, W9 2PA
For more details and to book 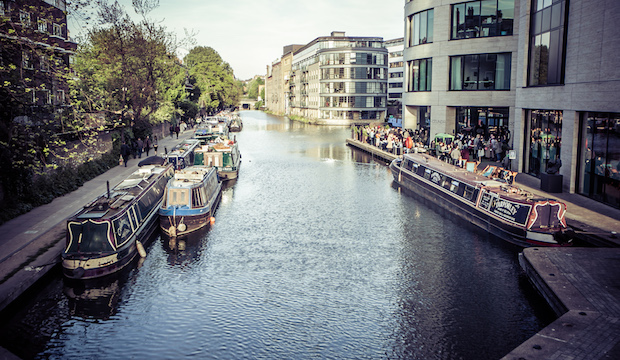 Long before Coal Drops Yard upped King’s Cross’s cool factor, Rotunda was drawing in the crowds with its huge, relatively quiet canal-side terrace with masses of outdoor seating. The owner has Corneyside farm in Northumberland and all the exceptional beef (exemplary burgers too) and lamb on the menu is dry-aged in an ageing cabinet on display, hung and butchered on site, so Rotunda scores full marks on its farm-to-table ethos. A chef's counter is a recent addition. It is a great spot for combining al fresco dining with some culture at Kings Place, as they share the same location. 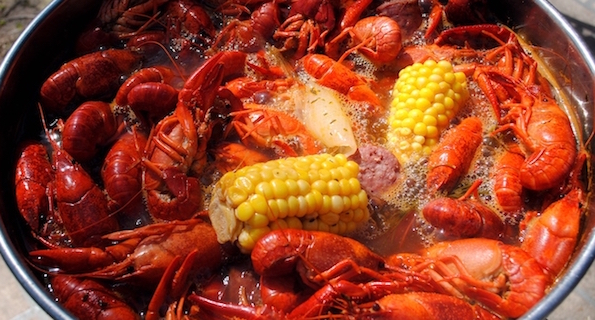 Cajun and Creole food in an English pub setting on the Regent's Canal in Islington is a rather different project to Jacob Kennedy's Soho Italian wine bistro. There's a family connection too; at the turn of the 20th century, Jacob Hortenstein came to Plaquemine to build a lock to enable heavy cargoes of Louisiana timber from the Bayou onto the Mississippi. Carrie B Stewing, a Hollywood actress opened Plaquemine Lock in 1909, swooshing a champagne bottle against the lockhouse as the family steamer (called Carrie B Schwing) passed through the lock gates. Jacob is the great grandson of Carrie B Schwing and Jacob Hortenstein, hence the name and the kitchen serving uncomplicated Cajun and Creole cooking – just like the food that his high society great grandma probably had someone make for her.

The walls are painted a hot, sultry yellow with murals of life on the Bayou, plantation houses and river boats. It’s all bare caff tables, cutlery in tins and orders taken at the bar. There are sections for oysters, both raw and grilled, and for Po’boys (overfilled sandwiches stuffed with the likes of 'beef debris'). Gumbo, by the cup and bowl, is as it should be: a deep, luscious stew of sausage and chicken, with crawfish added for dramatic impact as it is served.

At the weekends, there's also a lively jazz brunch. 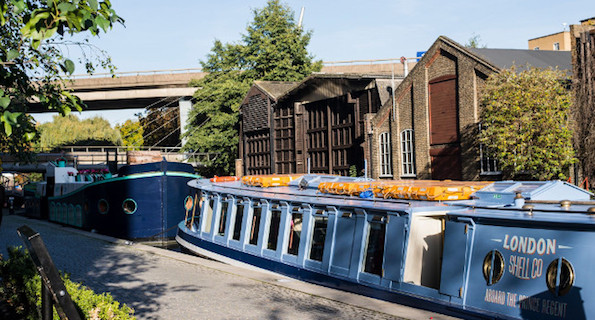 Not just by the water but properly on it, The London Shell Co is a quirky, picturebook pretty, barge on the Regent's Canal with a tiny diesel powered kitchen serving up thoughtful, simple, seasonal dishes. At lunchtime, it stays moored and offers a ridiculously good value set menu. Come the evening, after safety announcements, it sets off thrumming down the river, prettily candle-lit. Feast on dishes such as charred mackerel with chilli spiked purple sprouting broccoli and toasted almonds, or pappardelle with shavings of salty Berkswell cheese, wild garlic and seared king oyster mushrooms. Indulgent meringue with poached rhubarb or summer fruits is the dessert of choice to finish. Delightfully different for a balmy evening out.
This summer, The London Shell Co opens The Grand Duchess too, which will be moored permanently on the Regent's Canal.
Where: Grand Union Canal, Sheldon Square, Paddington Central, W2
For more details and to book
May Green, Paddington 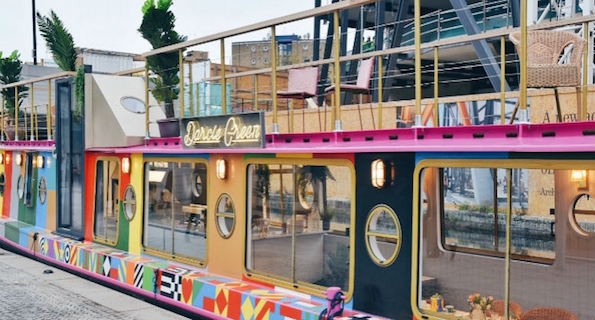 Whilst May serves drinks from the open windows and has a barge rooftop terrace, it is the Darcie barge that offers simple, healthy, Antipodean-inspired food from brunch through afternoon tea to dinner. Yes, there's smashed avocado on charcoal sourdough toast with homemade labneh and shakshuka besides chicken parmigiana, Sichuan soft-shell crab and Asian-influenced salads.