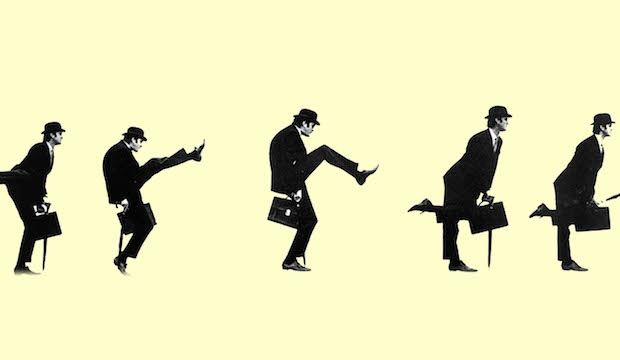 Ministry of silly walks, John Cleese
TRY CULTURE WHISPER
Receive free tickets & insider tips to unlock the best of London — direct to your inbox
King of nonsense, Monty Python member and mr Basil Fawlty himself is one of Britain's comedy greats, time after time delivering farcical sketches and perfect comedy timing. From Fawlty Towers to the French soldier, he's brought us dead parrots, goose-stepping and smacking children over a misshapen chip. As both a member of Monty Python and a writer in his own right, he always succeeds in making us laugh.

Now, with the news that Cleese will be receiving the 'Rose D'Or' lifetime achievement award, we bring you five of his silliest, funniest, and most ridiculous scenes:


A bit of cross-Channel mockery and franglais: "Your father mother was a hamster, and your father smelt of elderberries" is a classic line, and let's not forget the less well-remembered but hilarious, "fetchez la vache".


A dead man, his breakfast tray, and some incriminating kippers are enough to cement this as a stand-out scene from the timeless family favourite, Fawlty Towers.
Flying Circus – Ministry of Silly Walks


Sometimes the best comedy moments require no words, and John Cleese's comic acting make this a memorable classic.
Life of Brian – What have the Romans ever done for us?


Leading one of Monty Python's most well-known and frequently quoted scenes – and a video employed by History teachers across the country...."Oh, peace? SHUT UP."
Life of Brian – Jehovah


"There's always one, isn't there?" Cleese as a school master-esque executioner follows the brilliantly blasphemous themes of Life of Brian in perfect dead-pan fashion.
Share: