Brooding, rugged and glistening like an otter: Poldark returns this Sunday night to BBC 1 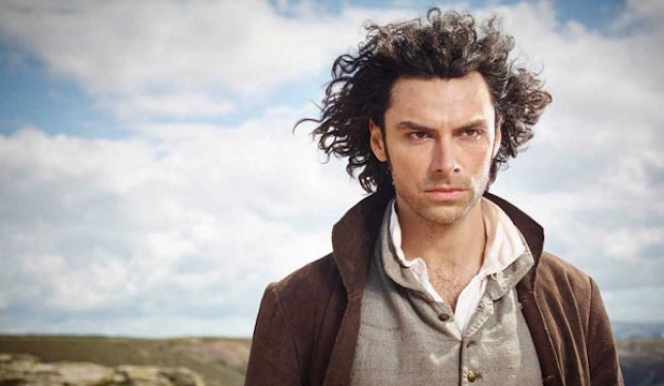 Lo! What is this rugged and hairy vision of manhood striding over the wild Cornish coastline? Why it's our favourite TV hunk, he of the mud-soaked, rock-hard abs and matted hair, who was last seen on our TV screens in April last year: it's Ross Poldark himself.

Picking up from the end of season one, with Poldark's arrest, season two works quickly to remind us of the storyline that had 10 million viewers glued to their television sets in 2015.

Before us once again, smirking and plotting away, stands the poncy, pasty, prickly villain, George Warleggan (Jack Farthing). He's still sniffing around the skirts of the long-suffering Elizabeth (Heida Reed) and doing his best to see Poldark hang for having plundered a shipwreck in order to feed hungry locals.

There's the troubled and hopeless Francis (Kyle Soller), who yearns to be mighty and admired like Ross, but foolishly gambled his fortune away. He continues to have all the self-composure of warm ice-cream.

Here comes Poldark's beautiful wife Demelza (Eleonor Tomlinson), with her shocking mane of red hair and occasional slip into flat Westcountry drawl reminds us that the lady of the house was, until recently, the feisty scullery maid. She's still mourning for the death of her young daughter, brazenly ignoring her husband's commands, and thrashing about between the sheets with him at every opportunity. We love her.

And of course, the tempestuous and principled Ross Poldark. He's trying to save his mines and avoid the noose, but refusing to work with either wicked George or hopeless Frances to do either of those things. It's why he's the hero.

Among the cast are some new faces: the richly dressed and entitled heiress Caroline Penvenen is a favourite, with teeth far too perfect to have existed in the 1700s. She sends for surgeon Dwight to attend to her sickly pug. The doctor is rightly outraged, but, fortunately for her little dog, Caroline is an irresistible flirt and sex bomb. "Have you never had a dog?" she asks him. It's a compelling argument.

It's an exciting first episode, with an explosive twist, that sucks you straight back into Poldark's dark and brooding world. And if the plot isn't enough to make you fall back in love with the series (and it should be), tune in for the shots of Cornish coastline and the swishing of beautiful eighteenth century skirts. We'll be watching this as a priority every Sunday evening -- and recording ITV's Victoria (on at the same time) to watch the next day.