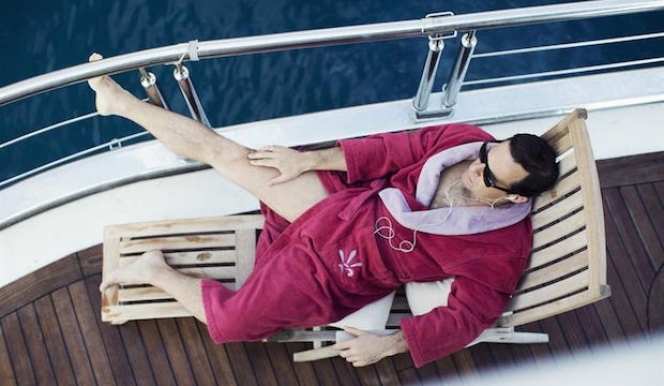 A scene from Chevalier
Aside from ‘the surprise best film of the summer’, it’s hard to know how to classify Chevalier.

Is it is a deadpan buddy comedy? An arty political allegory? A mordant feminist treatise? A hysterical psychodrama?

TRY CULTURE WHISPER
Receive free tickets & insider tips to unlock the best of London — direct to your inbox
The harder you grope for a description, the more you risk washing the colour out of a film that is singular in its lightness, deftness, and capacity to entertain.

Chevalier observes a group of six men taking a yachting holiday in the Aegean Sea, waterskiing, scuba-diving and eating chef-cooked dinners. It’s during one of these dinners that the heavy atmosphere of masculine one-upmanship eventually manifests in a game of ‘chevalier’: a contest of masculine superiority.

To decide who is 'The Best in General', the men start to treat every aspect of their holiday as a competition. These competitions range from the childlike (who can skim pebbles the furthest?) to the adolescent (who has the best erection?) to the middle-aged (who has the lowest levels of cholesterol?), but each is fuelled by a desperate need to quantify male-ness. Chevalier's director, Athina Rachel Tsangari, pulls no punches when it comes to revealing the pathetic nature of this need. 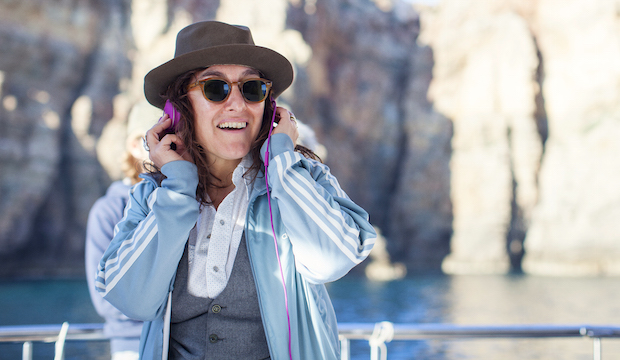 The entirety of Chevalier takes place on the yacht, so it bodes well for the future of cinema that Tsangari is currently filming on a shipping container out in the Pacific: aquatic environments clearly suit her. She answers the phone in Seattle where she’s on dry land for just one day of restocking and rest before heading back out to a signal dead-zone in the ocean. Tsangari sounds understandably tired and is tight-lipped about what she’s currently filming, but she quickly engages with the questions about Chevalier and laughs openly throughout the conversation.

Although Tsangari describes herself as an ‘anthropological’ film-maker (her most recent film, Attenberg, took inspiration and its title from David Attenborough), Chevalier is a very human and humorous film. The male characters are filmed with a characteristic wry detachment, but the story is shot through with a sense of forgiveness and it ends on an optimistic note.

Confirming this, Tsangari says that Chevalier isn’t a condemnation of all men. ‘I don’t believe in what you’d call ‘objective truth’,’ she says. ‘It’s not that I think that [in Chevalier] is how all men are. I don’t want it to be ‘a movie by a woman, about men’, because that’s so reductive, and sexist in both ways. I was interested in the way feminine and masculine were cohabiting in those men. I’ve had girlfriends who say they see themselves in the characters in Chevalier.’

Is there one particular character that she feels has more of her in it?

‘Well, I think just by my role as a director and by my position in this particular set-up, I identified more with the doctor. I had invited all these people on the boat and I was observing everyone while always trying to smoke out on deck.


Chevalier is the latest film from a narrow but important movement termed the 'Greek Weird Wave', and alongside work by director Yorgos Lanthimos (whose impressive Dogtooth involved contributions from Tsangari and Chevalier co-writer Efthymis Filippou) it comprises part of the cinematic response to what Tsangari refers to as 'a very difficult time in Greece'.

'We basically escaped from reality,' she says of the shoot, 'and recreated it under a different lens.’

Any sense of escapism is heightened by Chevalier’s moments of physical comedy, which showcase Tsangari’s strong instinct for slapstick. Apart from one scene in which a character makes mischievous use of a jet-ski, these little set-pieces (including a glorious, touching, dance finale) feel like they could have appeared in any film since the advent of celluloid.

Indeed, Tsangari lists her influences as Howard Hawks, the Marx Brothers, and Buster Keaton, singling out Keaton in particular as an ‘all-time hero’ of hers, an inspiring ‘composer of human movement’.

She also pays homage to Charlie Brown, Snoopy’s friend from the comic strip Peanuts, adding that her influences are ‘quite disparate, but somehow it makes sense. I make them intersect somehow through the way we work in the rehearsals.’

Tsangari laughs at herself and puts down the Peanuts reference to sleeplessness. But it does indeed make sense. Charlie Brown is a kind of tragi-comic hero, after all, and that’s what Tsangari is interested in: ‘characters who are in conflict within themselves and within their tribe’. It’s also important for her ‘screwball tragedies’ that physical comedy is ‘smashed against the tragic’.

As she talks about the elements of ancient Greek tragedy in her work, it’s hard not to imagine the Aristotlean process of betrayal, redemption and catharsis being enacted by Schulz’ hapless little depressive.

Perhaps the best way to describe Chevalier, then, is ‘Snoopy by Sophocles’: cartoonish, melancholy, profound, ecstatic, and very funny.

Chevalier is out 22 July

Read our review of Chevalier