Playwright Ali McDowall tells us about setting a play on space, his meticulous writing process and finding his heroine 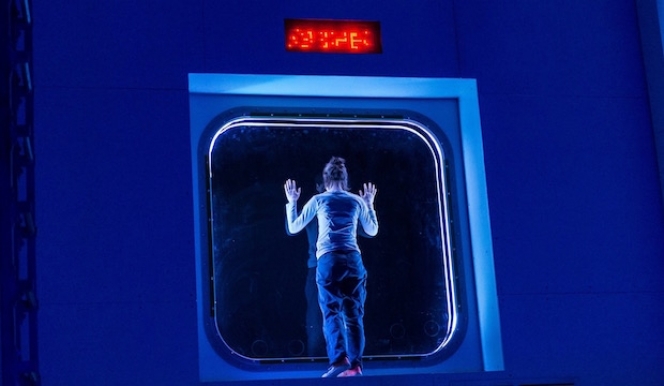 Back when we interviewed Royal Court Artistic Director Vicky Featherstone last year, he was top on her list of hot young talents. So it was a hardly a surprise when the Royal Court’s new season celebrating its sixtieth year of stellar new writing boasted a new play by Ali McDowall on the main stage. 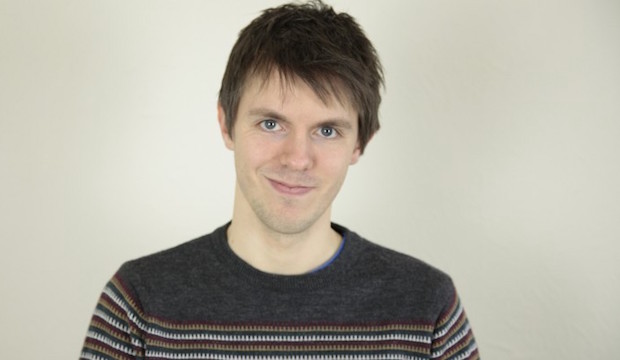 What was, however, more of a surprise was the play’s setting. The playwright laughs when he recalls submitting the finished version of X and telling unsuspecting creatives at the Court that it's set on Pluto. (‘They were not fazed by that in the slightest’).

When we caught up with Alistair McDowall to find out more about this chilling, tender play set on space he was quick to clarify that X 'isn't really science fiction'.

‘For all of its oddness, the play is quite a simple story about this woman: what she’s scared of, what she loves,’ he explains.

‘I wanted to write about this character Gilda. I had her story, which was about being cut off from home, but I couldn’t find the right vessel for her,’ he explains.

He played about with half-forgotten ideas about setting a play on Pluto and, hey presto, found a way of telling the story. Despite the ‘obvious genre trappings’ of Science Fiction (space station setting, technical details, uniforms) the Pluto part of the play is secondary.

He doesn’t divulge the inspiration for the story itself: ‘it sounds very wanky whenever I talk about it… Gilda just turned up and her story needed telling’.

But the character echoes her creator. ‘Her anxiety worms into the structure and forms… The whole play is very anxious to me.’

The anxious character is a regular feature of his writing: ‘I have had a life of coping with anxiety, on moderate to severe levels, at different points… So that’s completely real to me’.

It was still the story, this apparition of a character, which drove the writing of X: ‘I always completely understood why Gilda felt the way she did. She is, without a doubt, my heroine of the piece.’ 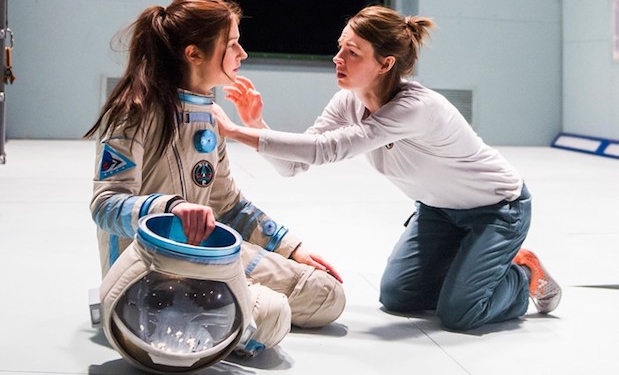 Ria Zmitrowicz and Jessica Raine as Gilda in X: photo by Tristram Kenton

If you've seen X you'll recognise a moment of meta theatre from the play, which, in its writer’s words ‘doesn’t entirely want you to know who is the lead character’

We wanted to know what McDowall was intending by highlighting the issue of narrative ownership.‘I don’t ever feel like I have something very direct to yell at an audience,’ he says. ‘I just worry about telling these people’s stories as clearly as possible, as directly as possible, in the best form.’

In the case of X, form pushes the boundaries of traditional theatre, spiralling from what feels like an awkward office comedy to horror then to mind-boggling concepts brought to life.

‘It was important to me that the structure of the play be constantly shifting and changing, that you think it’s about one thing and suddenly it’s about something else.’

The result is astonishingly clever; you start to suspect that you’ve heard things before. This comes from ‘meticulous’ details in the writing: ‘every line has some duality, some secondary purpose other than what’s happening at that particular moment, in that scene’.

The big question, then, is why. The form and humanity of the story is striking, but we were left reeling – and conflicted over possible meanings. We certainly have our theories but McDowall is tight-lipped.

‘I don’t like to inflict any kind of ‘this is what it’s all about’ reading on it. I have my idea of what’s actually going on in there, what it’s about and what it means, but I’ve heard double-figures of other people’s versions.’

He's wary about spoilers: ‘I don’t like to give definitive answers because it reveals more to you if you go back and watch it again.’

And what about the reactions? More so than other playwrights, who might provoke a unanimous chorus of three or four stars, McDowall’s writing tends to polarize. Pomona left audiences divided and just a quick check of Twitter shows reactions to X are strong and mixed.

But McDowall isn’t fazed. ‘You can’t set out to write something that is literally for everyone. I kind of feel OK with that, because a lot of the stuff I absolutely adore a lot of people really loathe, and vice-versa.’

‘It’s an extremely personal play, really,’ he admits, adding that he’d expected the space station setting to put other people off.

‘To be honest, I still feel the same way about writing that I did when I was eight or sixteen. I’m doing it because I really love it. I’m just such a fan of stories. I want there to be more in the world, and there are never enough for me.’

Critics have made much of the admission that a teenage McDowall wanted to write films and wrote plays instead because he couldn’t afford a camera. But now there’s no sense that theatre is just a stepping stone.

‘I accidentally stumbled across my perfect form and realised that it was so much more exciting to me to bring a room full of people together and really try and cook that at differing temperatures.'

'That hasn’t changed since then – theatre is not a way for me to get into doing other stuff, it’s its own thing and I love it.’

Will he tell us what's next? Of course not. But that makes us all the more excited to wait and see.

X is at the Royal Court until 7 May.