Gear up for greed, debauchery and Class A capitalism as The Wolf of Wall Street immersive experience arrives in the City

Belfort's memoirs were immortalised by Leonardo DiCaprio in Martin Scorsese's 2013 film The Wolf of Wall Street and now they come to life in the City.

Together Stratton Oakmont Productions and director Alexander Wright bring the story to life in an immersive theatre extravaganza. Having transformed F Scott Fitzgerald's The Great Gatsby into a roaring party (and the UK's longest running immersive production), Wright is adept at capturing a hedonistic atmosphere.

The trappings of 1990s Wall Street come to life across a four-storey building in Moorgate, complete with a restaurant, Stock Exchange bar, boardroom and even a (small) swimming pool. It’s an ambitious operation from the outset, which has been delayed due to fears over actors’ safety.

Upon entry, we’re given a rather discomfiting pep talk about respecting personal space: it makes you feel like the morally bankrupt banker character you are supposed to become, but it also gives an uneasy insight into the types of audience such a production may be attracting. 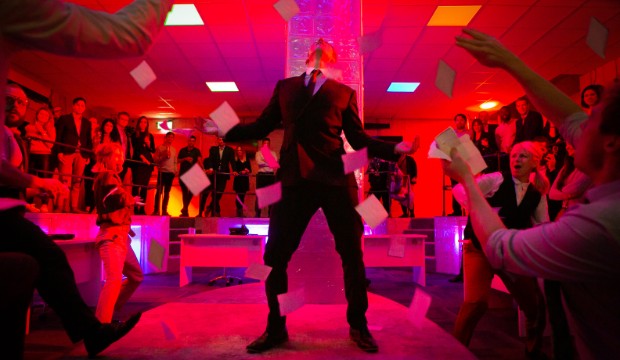 A cast of Americanised city slickers adeptly split people into different rooms and guide each group on a different adventure. We begin as new recruits to Stratton Oakmont, getting psyched up on company culture at the daily briefing. Jordan Belfort (Oliver Tilney) himself arrives and makes it rain money.

We’re whisked into different rooms, offering experiences from forgery and money smuggling to drug deals and FBI interrogations. These vignettes build different narratives for different people, but all experiences revolve around the same themes of corruption, wealth and demise.

There’s plenty of bravado and chanting over fake drugs and money, but the production handles the debauchery with dignity – and unflinching darkness.

There’s a particularly insightful scene where you hear an air hostess describe how Jordan sexually assaulted her. Instead of crudely acting out such violence the show uses flight-safety demonstrations to suggest it through abstractions. It’s an elegant and thought-provoking decision. But there are other instances when the theatricality jars with the immersive atmosphere: an angry, emotional sex scene is meant to be shocking, but is met with giggles.

Generally this version of The Wolf of Wall Street works best when it’s sticking to the straight-up silliness and parody – that’s when the audience really embrace it, chanting ‘fuck the poor’, stuffing wads of money into their socks and hiding Quaaludes in a condom. But thank goodness the show develops and departs from this, and forces everyone to confront the ugly underbelly of all the glamour and greed.

It’s these sobering moments that elevate The Wolf of Wall Street from a rowdy night out to a theatrical experience.

Click here to book tickets for The Wolf of Wall Street