The RSC's The Tempest, Barbican Centre

But this Royal Shakespeare Company production breaks into a brave new world of theatre with state-of-the-art stagecraft. Created in partnership with tech company Intel, this version of The Tempest brings the enchanted island to life with cutting-edge technology.

After mesmerising audiences and winning a flurry of five-star reviews in Stratford-upon-Avon, The Tempest comes to London to kick-start The RSC's 2017 season at the Barbican.

Tradition and innovation combine as the hi-tech set and special effects form a backdrop for acclaimed actor Simon Russell Beale's treatment of the play's timeless verse. He commands the magic as Prospero, stranded on an island with his daughter, ruling thanks to the supernatural powers of his books. But when he conjures a vast storm, the empty island fills with people – and confusion, comedy and chaos ensue.

Book now and transport the whole family to the magical island: the show is being described, with no spin, as 'the perfect introduction to Shakespeare for young theatregoers and families'. 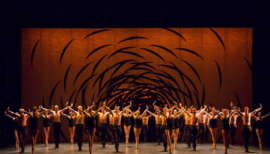