Aside from its nuanced treatment of tyranny, betrayal, and the fragility of power, the story of back-stabbed Julius Caesar is a sobering lesson in looking over one’s shoulder. And this production looks back to tradition with a relatively traditional, historically-costumed take on the history play.

TRY CULTURE WHISPER
Receive free tickets & insider tips to unlock the best of London — direct to your inbox
When it opened at Stratford-Upon-Avon, Angus Jackson's production of the Roman conqueror’s violent usurpation was accused of missing some much-needed links with the modern (and particularly post-Trump) world. The Telegraph complained 'it’s as if the RSC is turning its back on the daunting political upheavals of our age: the return of autocracy, the savage, chaotic aftermath of civil uprisings.'

But then again, the strength of the acting can’t be discounted, in particular James Corrigan’s calculating Mark Antony and Martin Jackson's intense Cassius. If you're looking for a traditional take on Shakespeare this winter, this roman tragedy is a safe bet. 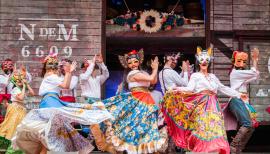 Much Ado About Nothing, The Globe review

Where to go on a date in London: Autumn 2017 edition
Sign up to CW’s newsletter
By entering my email I agree to the CultureWhisper Privacy Policy (we won`t share data & you can unsubscribe anytime).