The Caucasian Chalk Circle, Rose Theatre review 3 The Caucasian Chalk Circle, Rose Theatre review Holly CW
Regardless of whether or not you’re familiar with theatre practitioner and playwright Bertolt Brecht’s style of epic theatre, you’ll know the parable at the crux of his 1948 play The Caucasian Chalk Circle. A case is brought to court in which two women – a mother who abandoned her child and the mother who subsequently raised him – each claim the child is rightfully theirs. To decide which woman has the child’s best interests at heart, the judge draws a chalk circle around the boy, asking the women to pull the child tug-of-war style towards themselves. The woman who raised the child lets go of his hand, through fear of hurting him, and is thereby deemed his rightful mother.

BOOK HERE A tale as old as time, it’s a compelling story. But there are four long, meandering chapters that come before the climactic final scene of this play-within-a-play, and in this revival at the Rose Theatre in Kingston, adapter Steve Waters and director Christopher Haydon draw out each moment of the plot, resulting in a show that feels laborious and overstuffed. 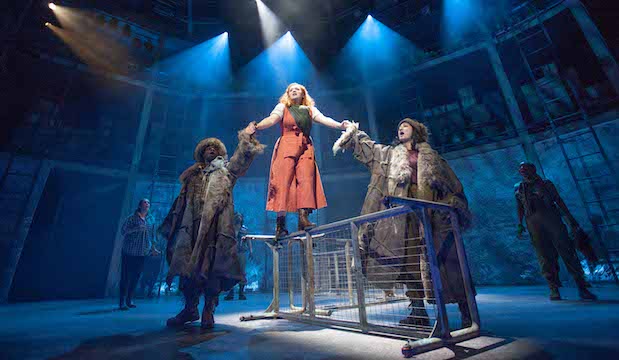 Enlivening the drudgery of this long journey, that sees its protagonist (for the most part) flee from a city under siege, travelling into the mountains on foot, is a folky score by composer and musical director Michael Henry. The original play is set in the Soviet Union against the backdrop of the Second World War, but Waters and Haydon keep the location of their production vague, while references to a ‘special military operation’ link it unmistakably to Putin’s invasion of Ukraine. Henry’s score complements this, weaving in influences from around the world, making it a story of timeless, international relevance.

The Singer, played here by actor-musician Zoe West (White Teeth), leads the music, strumming and tapping on an acoustic guitar while breathing energy into the arduous show. But it’s through the voice of musicals star Carrie Hope Fletcher (Heathers, Cinderella, Les Misérables) as Grusha, that the songs become hauntingly beautiful. Unlike her co-stars, who are not only tasked with extensive multi-rolling the 50-odd characters but pulling off Brechtian ‘acting’ without making it a pantomime, she's afforded licence to deliver an emotional performance and we sympathise with her dilemma. 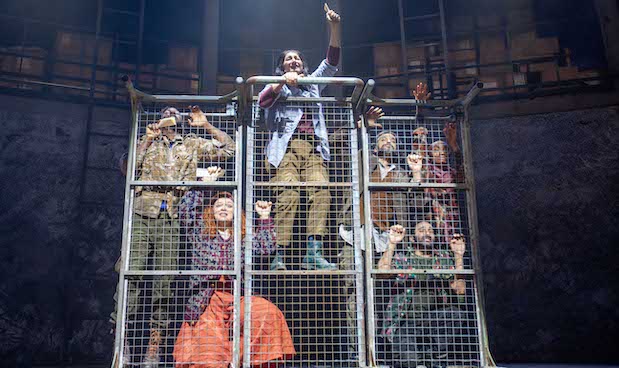 The Company of The Caucasian Chalk Circle at Rose Theatre. Photo: Iona Firouzabadi

As is uniform for Brecht’s well-known works, The Caucasian Chalk Circle is aware of itself as a piece of theatre, and this can often make it unpalatable. Where it works best here is through designer Oli Townsend’s flexible set. Iron bed frames are flipped to become fences walling in the refugees, and later joined together and hung with linen to form a banquet table. Above the stage, stacks of cardboard boxes allude to the transitory lifestyles of these displaced characters, in one scene, appearing like a shanty town with Mark Jonathan’s lighting giving the makeshift homes glowing windows. The son, Michael, is mainly represented by a series of teddy bears, growing in size as the child ages. The Governor’s severed head is represented by a melon.

The ‘acting’, though, is jarring, and makes this already drawn-out production feel tedious.

Still, Brecht is a mainstay of the A-level Drama syllabus and this production will allow school-age groups to see his rejection of naturalism in action.