The play centres on the lofty aesthete Valentina (Penelope Wilton), who has been invited to the St Petersburg Hermitage to clarify whether a genuine Matisse painting has been gifted to the museum. Before she even sees the painting it is implied she already knows the answer. The real drama comes from the arrival of her 36-year-old daughter Sophia (Ophelia Lovibond) who desperately wants her mother’s approval on her upcoming divorce. Sophia is married to a high-ranking Soviet party member, but wants to start life afresh with hapless but sweet Peter (David Rintoul) who is almost twice her age.

The question of the authenticity of the painting is set against the authenticity of life in the Soviet Union. However, the play has little to do with Communism versus Democracy, but rather the internal politics between a disenchanted mother and an exasperated daughter.

David Hare’s long time collaborator Richard Eyre provides his usual clarity and assurance in the direction. Eyre first worked with Hare 47 years ago when he directed the playwright’s second piece The Great Exhibition at the Hampstead Theatre Club, where Wilton also played the lead. 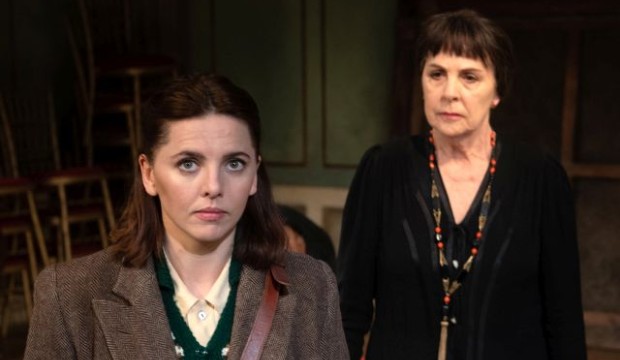 With over fifty years of stagecraft, Penelope Wilton’s performance is, as always, immaculate. Her portrayal of Valentina is played with a gravitas that only an old pro can conjure. She is at once subtle, cruel, audacious, insightful, and delivers each line with whip flash wit that keeps the audience laughing. Her Valentina flips between brutality and generosity. She vigilantly listens for moments when she can strike her foes with her chiselled words. Her damaging self-discipline has carved out the hollow of her life. Valentina’s only formidable opponent is herself.

The drama itself has little stakes. The play at its heart is a meditation on art and the creative process. There are moments of profundity in the long monologues, but this is not primo playwriting from Hare. Although it is to be applauded that the play centres on an older female protagonist, we are short changed by the fact that Valentina consistently gushes about the wonder of the male hero in this piece: Matisse and his brushwork.

Wilton is one of the finest British actors to grace the stage, and the play is worth experiencing for her exemplary performance alone. However, it is a shame that the story does not stand up next to this Herculean performer.

Click here to book tickets for The Bay at Nice, Menier Chocolate Factory