The Night of the Iguana, Noel Coward Theatre review ★★★★★

Clive Owen returns to the stage after 19 years to star in a strange and lesser-known Tennessee Williams play, the tropically-tinged The Night of the Iguana

Reverend Larry Shannon sweats his way through a nervous breakdown in a sultry, sticky Mexican hostel in 1961 play The Night of the Iguana. The tropical surroundings come to life evocatively in this West End revival. Director James McDonald leads a slow, sensitive production, steeped in the metaphor and poetry of Williams’s writing.

Set Designer Rae Smith conjures a sun-soaked veranda high up in the rain forest, with tatty cabanas around it and an unseen stairwell below. Intricate details, from faded folk art on a door to the Coca-Cola chest freezer, combine to transport you far away from the Noel Coward Theatre.

Returning to the stage after a 19 year absence, Clive Owen is on fine form as Reverend Shannon, a role immortalised on screen by Richard Burton in the 1964 film adaptation of The Night of the Iguana. 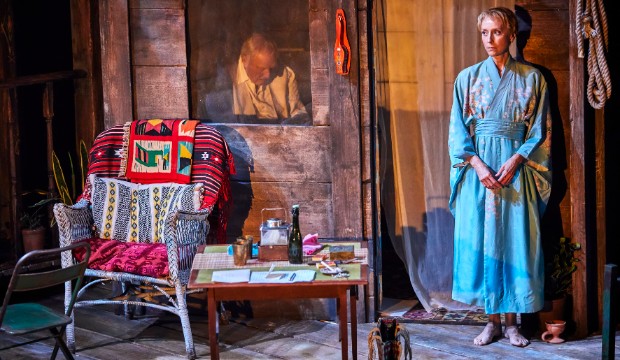 The Night of the Iguana - Julian Glover as Nonno and Lia Williams as Hannah Jelkes (c) Brinkhoff.Moegenburg

With a grubby cream suit and defeated demeanour, he cuts a desperate figure - and Owen keeps this fragility in the foreground, even when Shannon shrugs off his own dire situation and reverts to increasingly bitter comedy.

Cast out of the church for 'fornication and heresy', he is now leading a tour group of respectable Texan ladies around Mexico. But scandal has followed in the form of a sordid, sexually violent encounter with 16-year-old choir singer Charlotte.

Shannon arrives at his friend’s guesthouse in hope of relief, or at least a lazy afternoon on the hammock. Anna Gunn, who’s a familiar face from playing Skylar in Breaking Bad, is a delight as recently-widowed landlady Maxine. For all the frazzled flooziness, she shows glints of steely strength and aching loneliness.

The uneasy equilibrium is jolted by the arrival of genteel New England spinster Miss Jelkes (a luminous Lia Williams) and her grandfather (Julian Glover). There is an instant spark between Shannon and Miss Jelkes. But it is only after a night of heart-to-hearts that we discover this is a spark of recognition, rather than sexual attraction. 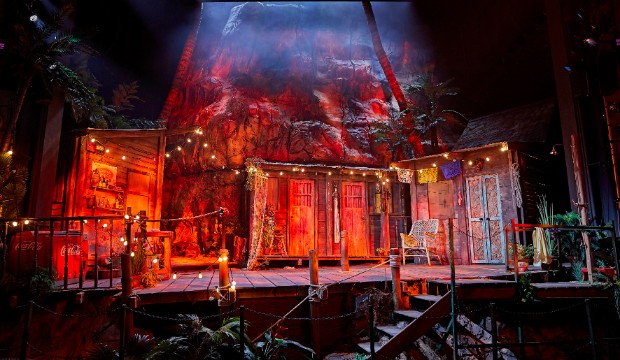 The Night of the Iguana - Set Design by Rae Smith (c) Brinkhoff.Moegenburg

As the epitome of grace and endurance, Miss Jelkes could easily be reduced to a dramatic device, but Lia Williams makes her feel conflicted and complex. Her softly spoken monologue recalling Miss Jelkes’ sexual history is the most magnetic moment of the production.

It’s the two women - the saintly Miss Jelkes and the wanton Maxine - who command the most fascination and offer the richest portrait of human suffering and strength.

Public booking for The Night of the Iguana at Noel Coward Theatre is now open. Click here to book.

Night of the Iguana 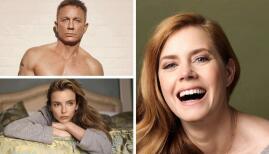