Hir, Bush Theatre review 3 Hir, Bush Theatre review Beckie Rutherford
Taylor Mac’s Hir is certainly a striking, even mythic, vision of modern America. Mac, a celebrated drag performer who goes by the all-lowercase ‘judy’, is known for cabaret-style performances that speak about queerness and American history. Hir, which gets its title from a gender neutral pronoun that takes the place of ‘him’ and ‘her’, is instead an American living-room drama that depicts a rural family who have decided to overthrow the patriarchy. Current belief systems that divide America clash under one roof and issues of gender play a huge part in Mac’s stark and witty but not entirely convincing play.

TRY CULTURE WHISPER
Receive free tickets & insider tips to unlock the best of London — direct to your inbox
Isaac Connor, played by Doctor Who’s Arthur Darvill, returns from the wars to find his father (Andy Williams), who recently suffered a stroke, sedated in make-up and wearing a nightgown. His mother Paige (Ashley McGuire) refuses to clean the house – a defiant reaction to the strict rules her abusive husband once held, and, instead, she celebrates a new world order that's rooted in queer politics and anti-patriarchal sentiment. Isaac’s sibling, Max (Griffyn Gilligan), has recently come out as trans-masculine and hopes to rekindle a relationship with his brother.

A lot happens in the Connor home, wondrously designed by Ben Stones, including therapeutic puppetry and Saturday cultural outings. Mac uses bold, rich and poetic language, but it’s occasionally incongruous in the characters who use it and, at times, the script verges on instructional. There are some brilliantly hilarious observations, usually uttered by McGuire with expert timing, but the pace wanes as chaos descends on the home.

Darvill is suitably distraught throughout, and is at his best when trying to reconnect with Gilligan’s Max. They offer some genuine moments of siblinghood, both vying for each other’s admiration and acceptance. McGuire, however, is the shining star, playing a mother who tries desperately and earnestly to shed a past world of cruelty to the point of delusion. Williams, as the father, is haunting, docile most of the time but occasionally hinting at the man he once was. His treatment by the others, particularly McGuire, offers up the most complex question in Mac’s play: whether being cared for is a right or a privilege, something innate or is learnt over the course of our lives.

Hir looks at the American dream of owning a house and dispels it as a symptom of patriarchal oppression. But the solution is less clear. While Hir is thoughtful, provocative and at times stirring, it might be that, like the Connor family, parts of it get a bit lost in the mess. 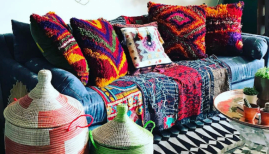