4 CW readers are interested
King Lear review, The Globe 2017 3 King Lear review, The Globe 2017 Marianna Manson
As the audience take their seats and groundlings filter into the courtyard, a motley crew of squatters burst forth onto The Globe stage, all dirty, hunched over, dressed in hoodies or anoraks, with beanies or low tilted caps. They destroy the draped tarpaulins, glare at the scribbled ‘KEEP OUT’ sign scribbled up-high, and smash in the barricaded doorway stage left.

It’s an abrupt and fitting start to Nancy Meckler’s production of King Lear, which has homelessness, statelessness, and loneliness at its very heart. But the unexpected opening is about as bold as it gets.

TRY CULTURE WHISPER
Receive free tickets & insider tips to unlock the best of London — direct to your inbox
It's a fairly conventional production, let down by a glitch with projection. King Lear has some of the most playful, complex, and poetic verse in the Shakespeare canon, but catching it becomes a playful game of touch and go. Over three and a half hours, the straining to hear the verse gets tedious.

Meckler’s interludes of physical theatre, however, salvage the situation. The highly stylized battle scene between Edgar and Edmund, the legitimate and illegitimate sons of the Duke of Gloucester, is artfully choreographed to the rhythmic beat of tambour drums. the delicate yet non-naturalistic step routine, which replaces a rather predictable scene of clashing swords, has the brothers dancing around the stage.

The storm sequence, on the other hand, remains surprisingly understated: swirling lights and pulsing drums do little to convey the tempest’s merciless power. 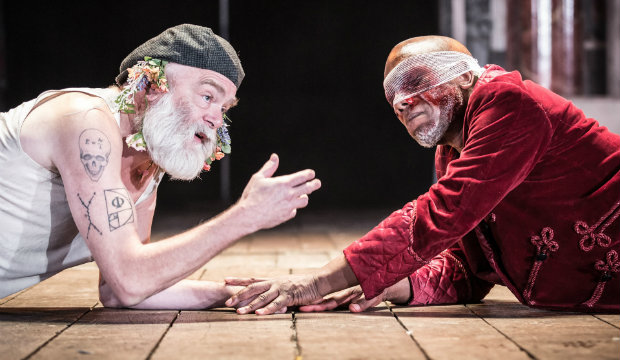 Kevin McNally as Lear and Burt Caesar as Gloucester

The urgency is thanks to Kevin McNally’s astute portrayal of Lear’s gradual descent into madness. At once, cruel, usurped and vulnerable, McKnally exposes Lear’s complex torments in equal and successful measures.

Of the rest of the main cast, Joshua James is ruthless as Edgar; his interpretation of his crazed alter ego, Poor Tom, is particularly convincing. Burt Caesar as the Duke of Gloucester delivers a strong performance – although the blinding scene could have been a little bloodier – but it’s Saskia Reeves, cast as a female Kent, who intrigues the most.

Vacillating between loyalty to her master and for the church, she treads a confident yet delicate line, and in doing so, proffers up one of the best performances of the night.

Conversely, Anjana Vasan as Cordeila falls short. She simpers a little too often and lacks the steely resilience one hopes to find deep within Lear’s favourite daughter. The result: a lack of intimacy between Cordelia and Lear. Their embraces are awkward; her timidity is grating. The final scene, which sees the murdered daughter cradled in her father’s lap, is strangely devoid of tenderness.

While there's enough talent and performative flair to make this version of Lear engaging, it's a shame that the bolder exploration of homelessness and dislocation is left behind in vignettes and visuals.