Under the directorial watch of Melly Still, Gilian Bevan portrays the gender-switched role of the monarch in a dystopian future reminiscent of Derek Jarman's punk visions, but it's Bethan Cullinane who holds the play together as chaste heroine, Innogen. Rejecting the influences of the sly Iachimo, played to sleek perfection by Oliver Johnstone, Innogen holds true to her love Posthumus (Hiran Abeysekera). Of course, with the Bard's aptitude for deception and treachery, with a good deal of cross-dressing thrown in the mix, love is infected with the poison of lies.

All the while, our punk Queen, Cymbeline struggles against the Roman army invading our blessed Britain, which the audience cannot miss in a select few lines intended to draw unnecessary comparisons to a post-Brexit Britain where all hell has broken loose. In the face of war, a jilted Cloten struggles to find and wed his step-sister, proving himself to be the unchallenged comedy standout, portrayed by Marcus Griffiths.

It's the comedy that shines in this production. Perfectly timed, and ingeniously delivered by the actors, the funniest moments come during the first act when young Cloten delivers a rousing morning song to his love, and when we are treated to an exquisitely camp dance performance in the city of Rome when first introduced to our Lothario, Iachimo. A gruesome severed head also stands in the memory as producing some of the biggest laughs, and the loudest gasps from the audience.

While the play succeeds with comedic aplomb, the 'tragi' element is not left far behind. With a female Cymbeline, the story of reconciliation between a mother and her lost children and a sibling reunited with her brother and sister, makes for a touch of emotion which hits the right notes without being overdramatic. The saddest moment is unquestionably shared between Innogen and Posthumus, who learn of the other's alleged infidelity whilst in separate countries, and as such mistakenly separate themselves from one another. 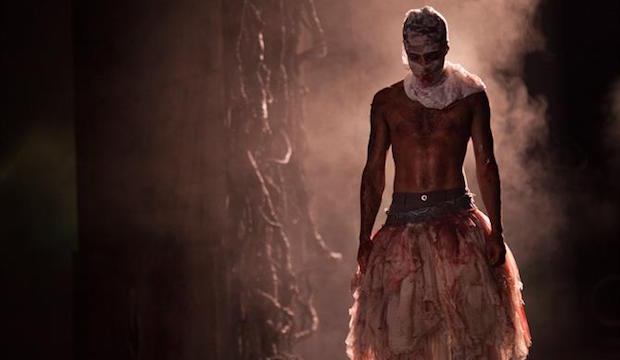 The music, composed by Dave Price, underlines the production with an eerie, melodramatic tone. The howls, Tarzan-yells and female-driven vocals are reminiscent of the deep, chaotic jungle. It's the switch in musical scene-setting in the different parts of Europe, 'otherness' in Wales, traditional instruments in England and electronica in Italy, which accentuates the real differences between the nations in which the story is set.

Like the final scene of a Poirot detective story, it's the final scene in which all is revealed after a comicly whirlwind, manic second act which moves with the frenetic pace of a bull in a china shop. The songs which intersperse the action are beautifully timed, and quietly soulful. The reconciliation scene is big on laughs, and comes together to tie the features of the play together, and it manages to leave the audience with a feeling of completeness.

Given that Cymbeline is one of Shakespeare's lesser-performed plays, this production has managed to make it feel like one of the Bard's best. It's well acted, beautifully scored and expertly directed despite the slightly unavailing set. For the untrained Shakespearian viewer, it manages to make the playwright accessible, and with sexual jokes aplenty, a little naughty. To leave the endless and unnecessarily forced Brexit comparisons aside, Still succeeds in this silly yet splendidly done Shakespearean romp.