TRY CULTURE WHISPER
Receive free tickets & insider tips to unlock the best of London — direct to your inbox
Puppetry, dance, and song are all devices used to bring Quixote’s wandering adventures to life. Particularly shining moments include the terrifying Lion Quixote encounters (Tom McCall) and the infamous windmill giants. Little pepperings of audience participation, including a bun-laden battle, are led by Hound’s Sancho, who excellently draws both young and older into the story. 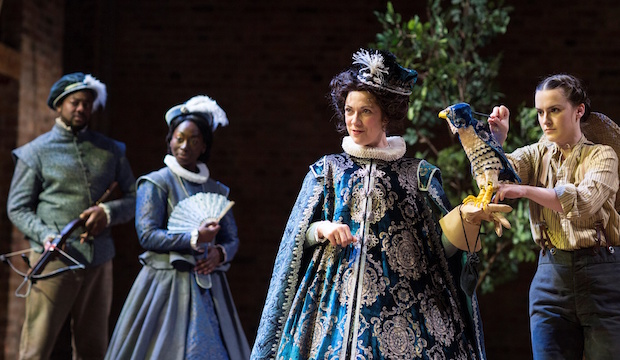 Fenton’s adaptation does good work to condense the original text, but be prepared: this sprawling saga is still lengthy at just under three hours. And although the ensemble is polished and full of verve, certain scenes in the second act lag a litte. While Grant Olding and Fenton’s music adds another element of storytelling, it’s hard not to think of the famous songs from the other Don Quixote-inspired musical Man of La Mancha.

That being said, Don Quixote is at its best in moments of joy. These extend past Hound and Threlfall, whose performances are excellent. Many of the funniest bits come from McCall as Quixote’s horse, or Richard Dempsey and Ruth Everett as the flamboyant Duke and Duchess.

Perhaps this adaptation falls short articulating the beauty of quixotic dreaming, with more attention given to the burlesque nature of Cervantes’ novel. Nevertheless, Don Quixote is still an entertaining adaptation that shows even in what is omitted the vastness and depth of Cervantes’ masterpiece.