But 1984 hit Chess the musical builds a story of romance and Cold War intrigue, set against the backdrop of an international chess championship tournament. Despite a sketchy book, some crude characterisation and uncomfortable racial sterotyping, it was one of the defining musicals of the 80s.

This is thanks to a handful of standout power ballads from ABBA songwriters Benny Andersson and Björn Ulvaeus, and the chutzpah of Tim Rice (Jesus Christ Superstar, The Lion King, Evita), who creates musicals from the unlikeliest of narratives.

Thirty years later, Chess returns to the London stage for a flashy, high budget revival with an all-star cast and the English National Opera’s award-winning orchestra and chorus. 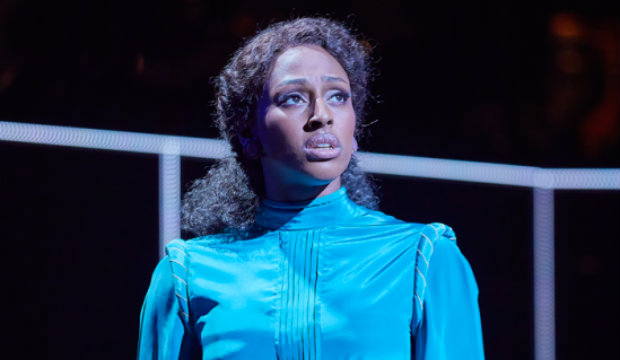 Tim Howar (Rent, Rock of Ages) brings all his rock musical credentials and gravelly vocals to the role of American chess champion Freddie Temper. And Olivier-winning, multi-platinum musical favourite Michael Ball is solem and bespectacled as Russian challenger Anatoly Sergievsky. Caught in the middle of the two men is Florence (Cassidy Janson), while Anatoly’s wife Svetlana (Alexandra Burke) is cast aside.

It’s hard to decipher much by way of motivation and narrative tension in the strange mixture of big chorus numbers and political references. And there’s no getting around the abruptness of the love triangle, upon which the puzzling plot revolves.

The design revolves around cutting edge video and lighting technology, where actors are followed around the stage by cameras with close ups projected and overlaid on the backdrop. This high-tech interpretation has a curiously retro effect, falling somewhere between X Factor, Eurovision and American daytime chat show. It’s a self-conscious nod to the cheesiness of the music, but it grows tiresome after almost three hours.

The classic songs still shine through – you can’t help but feel roused as the women belt out ‘I Know Him So Well’ – but you do have to sit through some distinctly out of date cultural stereo-typying and a fair bit of real time chess-playing to get to the good bits.