As the only guards facing away from the Taj, Humayun (Danny Ashok) and Babur (Darren Kuppan) struggle to follow the emperor’s orders that no one should look upon the great mausoleum until it has been completed. Although set in 17th century India, their relationship is a modern bromance (bhaimance) and the dialogue is equally modern – quick, sharp, casual, if occasionally too cute. 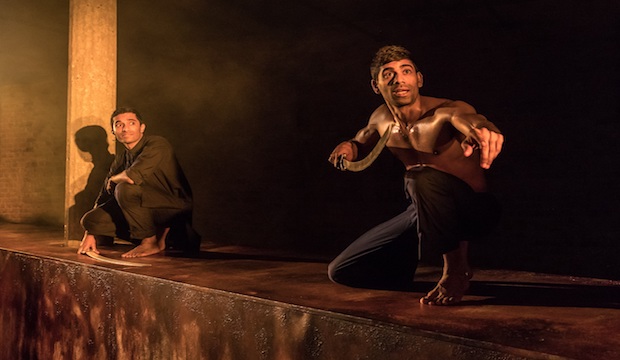 Ashok and Kuppan deliver two starkly contrasting yet equally endearing characters. Ashok’s Huma is consumed by the rules of the authoritarian regime and of his father, while Kuppan’s Babur is a dreamer, unable to follow orders without reflection. His idea of a flying palanquin shows off Joseph’s playful yet deft choice of using the past to explore the present.

Joseph intertwines Taj Mahal folklore with his story, and both guards end up saddled with enforcing another emperor’s decree, resulting in them maiming all masons who built the modern wonder. Here Lloyd makes his most characteristic choice, covering both characters – perhaps a bit too much – in deep red blood. As Babur suffers from the trauma, the two-hander swiftly evolves into a startlingly sad mythic allegory on the nature of beauty and its often cruel costs. 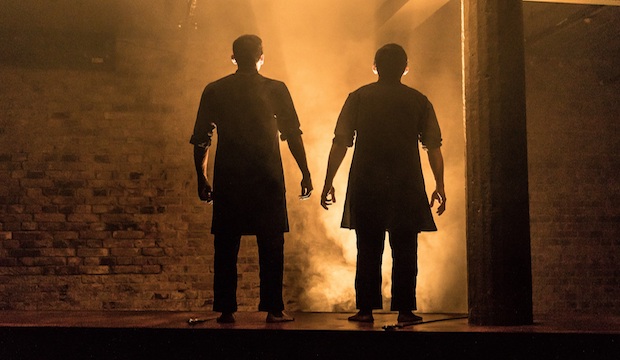 Simple yet highly effective, the monumental beauty of the Taj Mahal is depicted through richly coloured lighting and contrasts well with the bleak grey of the underground chamber. Designer Soutra Gilmour erects a large wall that cuts across the Bush stage, with two blood-filled trenches in front. The sheer size of the space sometimes overwhelms the intimacy between Ashok and Kuppan, and makes a subtle yet mythic story seem slight.

Yet Joseph’s Guards at the Taj still manages to resonate, showing that monuments of great beauty can often overshadow the tortures of those who helped build them, and that beauty bound in tyranny will inevitably crumble.